The VFX powerhouse delivers a bustling Santa’s village, both North and South Poles, and cute and quirky digital characters including Belsnickel, his Jack-a-lotes, reindeer, a Yule Cat Jola, and 641 elves, in the Netflix holiday adventure. 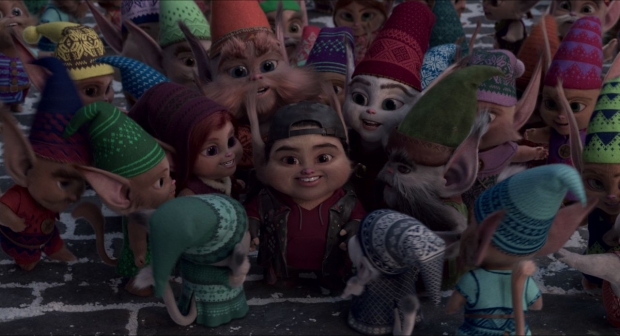 Hill got an early start on the project. “I began on the film with my first meetings with Chris Columbus around April 2019, when I was finishing up on the last season of Game of Thrones,” he says. Noting “a lot of people had a hand in the show,” Hill says that “all the vendors, Weta Digital and Lolas' support staff, the production and onset VFX team, all were essential.” According to Hill, they did extensive previs on the film during pre-production; Weta’s VFX team came up with a number of cute and quirky character animations and gags. “I worked with Marco Spitoni, the Weta Digital previs supervisor, and we ended up prevising around 60% of the visual effects shots,” he says. “The prevised scenes ended up being very close in timing to the final shots.  I would have prevised more if the budget had been available.  The production art department provided concept illustrations as well as some 3D models at the start of the show. Weta's art department embellished and extended these in collaboration with Jon Hutman, the production art director.”

In creating hybrid digital characters based on an actor’s physical features, Hill revealed that there were a lot of similarities and shared technology with how Weta had previously built fully digital hero characters, such as Caesar from the Planet of the Apes franchise. “Because the elves are more stylised and based only off a vocal performance and actor reference,” he notes, “we had a lot more leeway in creating the characters through a combination of motion-capture and animation, varying the amount of physical to cartoony depending on the tone of the scene.” “Adding a bit of squash and stretch and other non-physical motions (e.g., rolling eyes in opposite directions after taking a knock to the head) required a bit more rigging,” he continues. “For the Belsnickel elf based on Julian Dennison, the challenge was to bring characteristics of Julian into an elf puppet while still having him fit in with the other elves. Fortunately, Julian has great character expressions which were a lot of fun to transfer.”

Weta’s work also involved producing extensive environments and set extensions, including the North Pole and its surrounding arctic wilderness; Santa's bustling village with its many little workshops; and Belsnickel's South Pole lair. Using virtual cinematography and different practical shots, they produced a range of creatures to support the main cast: reindeer, Jack-a-lotes (Belsnickel’s equivalent to reindeer) and the Yule Cat Jola. In addition, they did extensive FX work, including many different types of snow, the Aurora, a wormhole, and other magical effects.

Hill goes on to explain how developing the design and movement of the film’s various creatures and characters proved quite challenging. “We had a lot of diverse creatures and characters in this film,” he says. “Designing the look and motion is the biggest challenging of creating characters the audience will enjoy.  For example, Santa's reindeer are noble and stoic, but occasionally anthropomorphised to convey an emotion or to be funny. Conversely, Belsnickel's equivalent, the Jack-a-lotes, had to be manic and crazy.  A lot of this comes from designing differences in movement and energy, and then layering on top unique motion and characteristics to individuals so they don't feel like clones.” He adds, “With the creatures, it was very important to me to have them interact with the sets and actors by puppeteering set elements or wobbling a table with the timing of an elf jumping up.  This required planning and commitment to the shots - you don't want to puppeteer a stuffy Jola cat licking Julian and an elf dancing on his shoulder - for weight and costume interaction - if you change your mind on the VFX later!”

Noting that regardless of the studio’s experience, each new show presents its own set of challenges, requiring new ideas and creative thinking. “Every show builds on what has come before,” he concludes. “Technology-wise, it's faster and easier to create these worlds. Conversely, expectations are higher, and budgets are tighter.  The constant and most important aspect [of our work] is creating compelling shot and art design, something that's fresh and hits the tone of the film.”