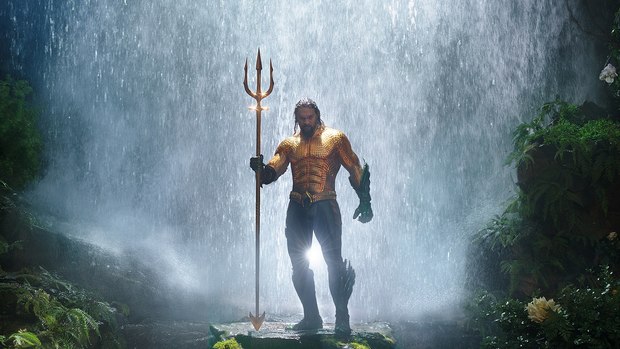 Following collaborations with Christopher Nolan (Interstellar), Michael Mann (Blackhat), Zhang Yimou (The Great Wall) and Guillermo del Toro (Crimson Peak) at Legendary Pictures, Nelson LoCascio brings her visual effects expertise to Warner Bros. and filmmaker James Wan best known for horror franchises Saw, The Conjuring and Insidious. “James is so inclusive and such a high-level creative; he elevated all of us and has such a great concept of story and design,” Nelson LoCascio notes.

The latest installment of the DC Universe, Aquaman follows the son of a human and Atlantean who goes on an epic journey to become the ruler of the legendary oceanic kingdom of Atlantis, with Jason Momoa reprising the role of Arthur Curry/Aquaman introduced in Batman v Superman: Dawn of Justice and expanded upon in Justice League. “To be working on a movie of this size and scope with water was satisfying,” she continues, “especially because the technology was there to achieve the vision. It’s still extremely hard work on everyone’s part as well as incredible innovation from our visual effects vendors.”

Each project is a learning experience. “I love what I do because every show is an opportunity to start over. Working with all of the different personalities and styles of directors gives you extra tools to use in the future. Someone once said to me, and I’ve adopted this, ‘Who do you have to become to get the job done?’ It’s understanding what the goal is. What is the vision? My job is figuring out what is the best path that meets the financial, creative, and scheduling needs. You learn different ways to achieve that and then can apply whatever makes sense on any given project based on what the requirements are.”

A major source of inspiration came from the comic books. “James was specific and clear about each and every character like Black Manta [Yahya Abdul-Mateen II], Aquaman and Mera [Amber Heard] in making sure that they were true to what he wanted them to be. People appreciated that. When you see Jason Momoa with the Trident and in his final outfit, we worked on that shot for a long period of time because James wanted it to represent everything that Aquaman is today.”

High-level concept art established the overall mood and aesthetic for the production. “There was an evolution to the process. The first thing that happened in post-production was postvis for every single shot. We actually delivered the full movie twice. Once for that and again at the end. The postvis explained what was and wasn’t working, and enabled James to continue figure out what was the best direction to go with the story; it also indicated how far that we needed to go to achieve what was necessary for the final film.” 2,300 visual effects shots made it into the theatrical version handled by two visual effects supervisors. “Kelvin McIlwain [Furious 7] was on the movie for the full time, while Charles Gibson [Babe] was on during the shoot. The studio was incredibly supportive in particular Walter Hamada and Geoff Johns at DC and Anne Kolbe at Warner Bros. We worked closely with ILM, MPC, Scanline, Iloura [now part of Method Studios], Method Vancouver, and Rodeo FX in Montreal. It was a constant collaborative process. James, Kelvin, the editor [Kirk M. Morri], and I would assemble in the screening room and review all of the work. Then we would do a weekly screening with the studio so they would be included and understand exactly what we were doing and where we would be headed.”

The visual effects vendors needed to be flexible for last minute alterations. “There was a change in the third act battle that it made more sense for ILM to take on all of that where that had been previously split up; that allowed us to bring in Method Studios for the Karathean sequence. There was a lot of sharing of assets between all of the facilities. Anytime whales were needed we’d could call up the people who made the whales and get them over to the other companies; that sort of thing was a constant.”

Although the film has a photoreal fantasy look, Aquaman was treated more like an animated movie. “We would learn so much going through each shot like hair simulations or fabric, how that’s behaving, and then go and apply it to everything else. It was a constant evolution and reset,” Nelson LoCascio recounts.

Water plays a pivotal role in the storytelling. “For the most part everything was created after the fact in terms of the underwater environments. It was a layering process. There was a portion of live-action photography, followed by creating of the environments, then all of the water and particulate matter, the ripple effect, how their hair is moving and how the water itself is behaving, for instance in the fight scenes. You added all of those bells and whistles until you achieved the underwater look.”

Lighting was an issue because in the deep depths of the ocean there is only darkness. “One of the great solutions there was Aquaman sees differently underwater so you are able to see more than you normally would. The murkiness varies in different sequences and environments. There are parts of the underwater that has lava so you get different particles in the water from that and there are clear parts where you’re closer to the surface. There are so many different looks to it. Every choice in each of those sequences was intentional.”

Physics was respected to make the underwater sequences believable. “There’s an early battle with incredible explosions and destruction where you see the bottom of the sea and the silt getting rustled up. It was about making sure that there was natural interaction. A great level of care was taken with the camera work and animation to make sure that it was eventually turning into exactly what you would have photographed if this had existed underwater.” Extensive design work went into creating various aquatic creatures and plant life. “There are the sea dragons and seahorses, which are their vehicles underwater as well as the sharks. As the third act battle evolved there are many more creatures that come to the party. We had to make sense of them being underwater, their movement and how they’re being utilized.”

The biggest challenge was creating the underwater look. “I remember the moment when we saw the big wide shot of the sharks on the right and seahorses on the left as well as the seaweed. I was like, ‘Thank god!’ We’re going to be able to do this.’ There were a lot of moving pieces to it. The hair was difficult, especially, because the characters have a variety of hair and depending on what scene it moves differently. To create a look that you’ve never seen before was the underlying challenge.”

It was important that the story did not get lost in the epic visuals. “You want to make sure that everybody understands what is actually happening.” The production schedule needed to be met. “With any project of this size, scope and complexity time is always a major issue. Just having enough time for the work to evolve to point that it wanted to. For me the third act underwater battle is unbelievable and is an incredible experience to watch and an amazing achievement of James. I can’t wait for the world to get to see Aquaman.”

How ‘Luck’ Applies a ‘Less is More’ Approach to Comedy
Z is for Zagreb: The Animafest Zagreb Exhbition 1972-2022
Dude! - ‘Rise of the Teenage Mutant Ninja Turtles: The Movie’ Arrives
‘Super Giant Robot Brothers’: A Milestone in Virtual Animation Production
‘Luck’ Aims to Bring Hope to Kids In and Out of Foster Care
Pre, Tech, and Post: The Many ‘Vizings’ of ‘Chip ‘n Dale: Rescue Rangers’
Hammering Out the VFX in ‘Thor: Love and Thunder’
END_OF_DOCUMENT_TOKEN_TO_BE_REPLACED