VFX supervisor Max Wood oversees 1,800 visual effects shots, filled with a CG gown of moths, three snarling Dalmatians, a wily Terrier, and a fearless, eye-patch-wearing Chihuahua named Wink, in the hit origin story for one of Disney’s most iconic villains. 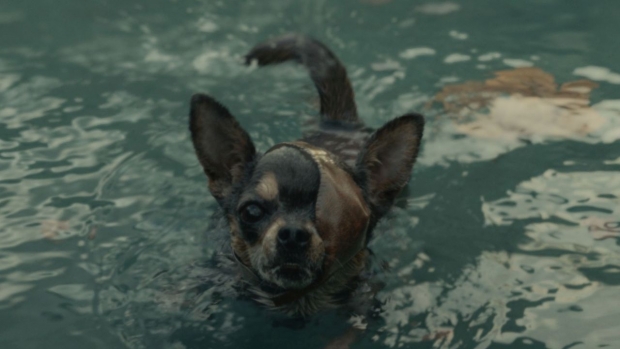 As much as Emma Stone’s fantastic performance has claimed the spotlight on Disney’s Cruella, the studio’s hit film that explores the iconic villainess’ origins, the numerous canine cast members are as equally compelling. VFX supervisor Max Wood, along with MPC Film, created CG versions of the Baroness’ (Emma Thompson) three Dalmatians, Buddy the Terrier as a puppy and adult, and the eye-patched Chihuahua known as Wink.  Also, among the film’s 1,800 visual effects shots - which include de-aging, beauty, and cleanup work by SSVFX - was the recreation of a punk-centric 1970s London, an oner that goes from the city street to the basement lavatory of the Liberty department store, a burning white cloak, and a Chrysalis-infested dress.

Dalmatians, if you don’t know, have a reputation for being divas. “The Dalmatians were particularly challenging because they did not like to behave,” notes Wood. “As much as possible, I tried to get the dogs in there even if the trainer walked them through on a leash so we could register how they looked in the lighting as well as their reflections on the floors. Over 50 percent of the dogs in the movie are CG, including Buddy and Wink.  Buddy took the longest to get right in the look development because of his fluffy and wiry Terrier hair.”

One fun moment is the pickpocket sequence aboard the double-decker bus. According to Wood, “The closeup of Wink picking up the wallet off the floor is practical, and when you go for the big wide of him walking across the bus, going down the steps, putting the wallet in the umbrella held by Horace, and jumping towards camera, that’s all CG.  We did several takes with the real Wink, but he never got the timing exactly right.” In another scene, Wink intentionally provokes, and is then pursued, by the Dalmatians. “The Dalmatians in the washtubs were meant to be live-action but didn’t look aggressive enough,” he continues. “We kept their bodies and replaced the heads. When they run out of the store into the back of the truck, we tried 10 takes with the three Dalmatians, and in the end picked the Dalmatian that was doing the best and had the other two and Wink as CG.  When Wink jumps through [to the cabin] he is real while the Dalmatian is CG. We had to cheat the motion blur for a couple of frames so you could read what was going on.” Six different plates were stitched together for the oner of the Liberty department store.  “That was the first day of shooting and everything took longer than expected, so we only had eight minutes to shoot the streets of London with the drone,” Wood explains. “We did two takes with the ARRI ALEXA LF because the extra resolution allowed us to choose afterwards whether to go portrait or landscape. A lot of the vehicles in the street are CG and over half of the pedestrians are CG. Going through the CG roof, we have a plate shot on the ARRI ALEXA 65 with the ground floor practical and everything up to the glass in CG.  We had to work out where the camera needed to be to match the motion if it was much higher, and then reproject all of that to some simple geometry down below to get the correct perspective change. As we get to the ground, we transition into a Steadicam shot with an ARRI ALEXA Mini.  We go through the people, open the door to another plate at a different location, go down the stairs and through another door to a plate of a different part of the same location. Parts of the corridor were reprojected so we could redo the camera move slightly to make sure that it all lined up with the speed and camera orientation. As for the end, they preferred Emma Stone on a different take than what they preferred for travelling through the building. We used a wipe of a guy walking through the camera, which wasn’t intended as such but happened when we stitched the two plates together.”

“At the actual location for the house of the Baroness, which is on the top of the cliff, only the ground floor was practical,” Wood reveals. “We replaced everything above the ground floor because our director Craig Gillespie preferred a different style of rooftop. We added an extra story to make the house seem grander, and when you see the front of the house, only the porch in the front is real because Craig wanted a symmetrical building.” Working from art department concept art, Wood has the rest of the house replaced in post. “The actual grounds had a perimeter wall around it, so we put bluescreens up and replaced below them to make it feel that it was going down into the cliff, when it was actually going into a deer park with deer running around while we’re shooting!” he adds. “The whole cliff face and sea were CG. We transition into CG as Estella/Cruella goes over the edge and as she is falling, the live-action element is mainly her face with a full CG costume.” While party-crashing a posh event held by the Baroness, Estella/Cruella dramatically sets her white cloak on fire to reveal a red dress underneath. “We ended up shooting both the red and white versions of Emma doing the same actions,” Wood says. “Emma walks in with the white cloak, but when she sets it on first and it goes up in flames, we used her in the red dress and the white cloak is fully CG. The trickiest part was getting the timing right because Craig wanted it to be a fast movement and to also tell the story that it is a burning edge and not a wipe. We used Houdini to drive the edge of the burning material and added the flames onto that edge. We had some light gags from DP Nicolas Karakatsanis which were difficult because some of the shots are quite wide.  We had to add some interactive lighting of the fire onto the pillars and people as well.  The biggest challenge is that her hair under the hood gets pressed down and once the flames go up, she has this hair that is bigger than the actual head.  If you watch carefully there are some meticulously placed flames and things to cover up the fact that we pop her hair out on a couple of frames.” The chrysalis dress was done entirely in CG. When Estella/Cruella is stitching the practical beads, she is actually working on only a small patch of cloth. “When we see the full dress, it’s CG,” Wood notes. “Because we cheated the lighting a lot on that dress to make the movement feel more magical than it really would be, Craig decided that we should just build it in CG. I was working with our costume designer Jenny Beavan and her team that put together the designs for how the beads would be laid out. We made some modifications to make it work for the shot. The CG dress was built with tens of thousands of little chrysalises. We had the costume department to sew us a patch which we would literally bend in front of a camera at different spots throughout the scene so we could see how the chrysalises reacted to the lighting.”

The moths emerging en masse from the dress provides a dramatic, and frantic, reveal. “The whole dress has collapsed, and little bits of cloth are flapping where moths have left it,” Wood describes. “Then we have the hero shot of the moths flying out of the chrysalises. One of the more challenging things of the movie was getting the scale of the moths correct.  We had to rewrite some of our motion blur techniques to make it work because it’s cheated a lot, especially when they come close to camera. In the end, we did keep their real size and have them close to camera. It was a cheat to make sure the moths didn’t cover the actors too much at certain points, but Craig wanted the chaos over the Baroness, so he didn’t mind them going over her face.  It was very art directed.”