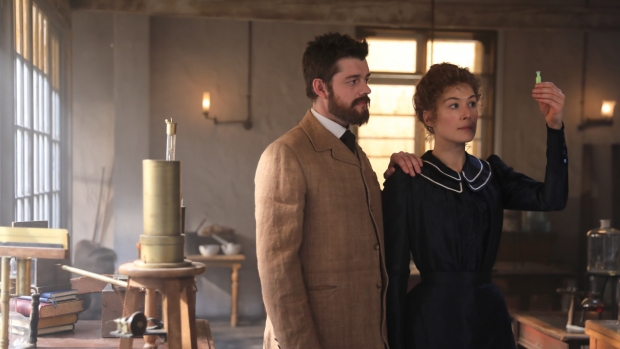 Under the direction of BAFTA and Academy Award nominee Marjane Satrapi, Radioactive celebrates the pioneering work of Marie Curie; the StudioCanal film is based on the graphic novel “Radioactive: Marie & Pierre Curie: A Tale of Love and Fallout” by Lauren Redniss.

Radioactive focuses on Marie, a fiercely passionate scientist working in the male-dominated society of late 19th century Paris, who struggles to progress her ground-breaking research, despite her obvious brilliance. After joining forces with fellow scientist and future husband, Pierre Curie, they take her exploration of radioactivity forward, discovering not one, but two new elements: radium and polonium. The genius of the Curies’ discoveries and the ensuing Nobel prize propels the devoted couple into the international limelight. After a tragic accident, Marie continues her work alone, resulting in revolutionary discoveries that have dramatic consequences for the modern world - both bad and good.

From the outset, a trusting collaboration between UK-based Union VFX’s visual effects supervisor Simon Hughes and Satrapi was critical in building a creative language that could be used throughout the film’s production. The director has a background in animation and is creatively experimental and brave; she had created extensive animatics and storyboards and provided lots of reference material, which helped guide Hughes to a common creative vision on the more conceptual design elements.

“This was a unique opportunity to collaborate with a very creative director with a strong vision,” Hughes noted. “Marjane gave us a lot of creative freedom to come up with a visual language based on science to help marry Marie’s story to the impact of her work. It provided the opportunity for us to drive the creative and style. It was great to get stuck into lots of scientific research and flex our design, CG and FX muscles to show what we’re capable of.”

Union’s work was often used to illustrate science to the audience either by way of explanation or in a more abstract sense, marrying Marie’s thoughts and dreams to her research.  The team conducted extensive research into fusion, cell structures, and how radium behaves in a cloud chamber to inspire creative interpretations based on reality.

For example, Union employed a photographic quality in how they showed the splitting of the atom to discover radium, to ensure it didn’t feel like an education video.

When Marie meets Pierre, bonding together in science and marriage, a beautiful visualisation shows the shadows of them making love ascend towards the night sky, which morphs into a fantastical idea of “creation” using a scientifically accurate vision of how atoms move around polonium.

Union took 3D scans of actors Rosamund Pike and Sam Riley wearing nude suits, standing entwined, creating assets that were placed in a replica 3D room; a cast light source generated the shadows which were then animated. The starry polonium sky was created in Houdini.

After her husband’s death, Marie’s dreams are influenced heavily by the impact of their work. She lies in bed surrounded by Radium.  We then find her at the center of a Radium dance that mimics scientific phenomena enveloping her somewhere between art and science.

The dance choreography was inspired by Loie Fuller, a pioneer of dance whose performances combined modern dance, costume and theatrical lighting techniques. She regularly performed at the Folies Bergère music hall in Paris and could well have been seen by Marie.

This complex sequence has many cuts (60 VFX shots in total) and the bluey green silk costume had LED strips sewn into it to light it up from within. As these factors would have made blue or greenscreen hard to handle, a grey background was chosen for the studio shoot in Budapest.

When retimed in Kronos, the in-costume light artefacts looked like electrical charges producing a kind of temporal effect, which was integrated into the overall treatment to create the ethereal effect. Marie and the dancers then had to be placed into a fully CG Samaritaine environment complete with cobblestone street in order to relight with FX to give it a three-dimensional feel.

In another scene, she sees her husband’s coffin with blood spilling out from the sides onto cobblestones.  This was achieved using fully CG blood combined with elements of dissipating fluid shot on a phantom at high frame rate.

The biggest environment challenge was creating a fully CG version of Paris in the snow, complete with La Samaritaine. There were no plates, but the team did have rooftop photography from a previous Union shoot and elements from a location shoot in Budapest to help. Reality was added through little touches such as matching the blown bulbs on the sign to the period, as well as adding a small animated cat on the roof.

Marie’s husband Pierre met with quite a dramatic end, being trampled by a horse-drawn carriage. Hughes’ team had to create a fully CG Rue du Pont Neuf bridge complete with cars and people on the street and replace the stunt actor using a mix of digital doubles and footage shot of Riley on the night. They also removed the support stunt people and added a painting-esque effect to provide the stylised look Marjane was after. The shoot took place at 3am in -10 degrees and was filmed at slow speed.

With each pass, Union logged the camera position, and got Riley to walk in at the end to film plates that could be used to replace the stuntman.  He was also lidar scanned in costume so he could be placed right in the heart of the fatal action using head replacement techniques and animated facial expressions based on the plates.

Towards the end of her life, Marie’s daughter persuades her to volunteer for the war effort taking her portable x-ray machines - petites Curies - into the field to help avoid unnecessary amputations.  More than a million French soldiers benefited from their presence.

Union’s World War I battlefield environment was based on a shoot in a cold, muddy field outside of Budapest. There wasn’t much dressed set, so they used Blackmagic to create a library of elements. There was also only one petit Curie requiring a CG version to allow the creation of a fleet heading into battle.

Transforming the snowy, foggy plate required a large matte painting and the addition of splashes as the wheels went through puddles, as well as smoke and fire.  A lot of the matte painting was done in comp - even on dense smoke shots where Marie’s hair was challenging.

Marie also sees a whole ward filled with her dead husband in one of her visions. To achieve this, Union used split screen techniques replacing extras (chosen with similar body shapes and beards) with multiple digital Sam Rileys built from a 3D scan of Riley aided by some good lighting reference.

One of the most devastating impacts of her scientific discoveries is the Chernobyl disaster. While nobody knows what it was really like, first-hand accounts describe a unique type of fire; Satrapi opted for a stylised, hyper-real, painterly aesthetic with an interesting colour palette for the shots inside and outside of the plant.

Union did an elements shoot where they filmed all sorts of gasses on fire at the top of a hill against the sky at different frame rates; these were mixed with a 2.5D DMP and some CG building structure and rubble components to create the stylised look visualised by Satrapi and cinematographer Anthony Dod Mantle.

Inside the central chamber, Hughes added a waterfall and steam coming off the ground using FX and elements that included pouring salt at slow frame rates. The whole room was engulfed in a kind of cloud of particles and strands, which was inspired research into radium’s behaviour in a cloud chamber. Union also found old photographic references from within other reactors and mimicked the distortions found on many of those.

Nuclear weapons are also a consequence of the Curie’s science, and the film shows bomb testing done in Doomtown, Nevada - a test site established in 1951.  Doomtown is a replica US suburban town complete with mannequins dressed by JC Penny. The film’s Doomtown was shot in Almeria, Spain; Union extended the set and added mountain ranges using a mix of CG and 2.5D DMPs.  When the shoot’s anticipated blue skies didn’t materialise, replaced instead by a huge dust storm complete with oppressive, orange skies, the decision was made to embrace these and replace earlier shots.

Union filmed the invited audience who watched the test explosions wearing only ski-goggles as protection in the Budapest studio and placed them into the Almeria environment. To show the impact on the mock town, Union built two identically proportioned rooms, one complete with mannequins and home furnishings and one painted black and empty. The inhabited room was rigged with wires and SFX did as much damage as they could.

In the black set, Union worked with the SFX team to match the camera angles and shoot more flammable elements before marrying it all together with the addition of a dust storm created in Houdini that blows through the window.

Union’s biggest challenge on this project was recreating the Hiroshima bomb drop. They built a fully CG Enola Gay bomber, which then drops it’s “Little Boy” payload.  The view of Hiroshima is based on drone footage of Thailand manipulated into a matte painted environment complete with Hiroshima’s geographically correct river network.  Hughes had to take the cameras higher than drone flying height but was able to tile it together.

The impact and ensuing mushroom cloud was Union’s biggest FX shot to date at the time.  Hughes did an element shoot of Dettol being piped through a hole in black card in two large fish tanks, which was filmed from two different camera positions at normal and high speed to provide some nice elements. However, the shot was largely FX driven.