For VFX supervisor Louis Morin, Tom Harper’s wild ride through the skies of 1862 London was a journey filled with live-action shoots, stunts, digital doubles and one super-cold sound stage. 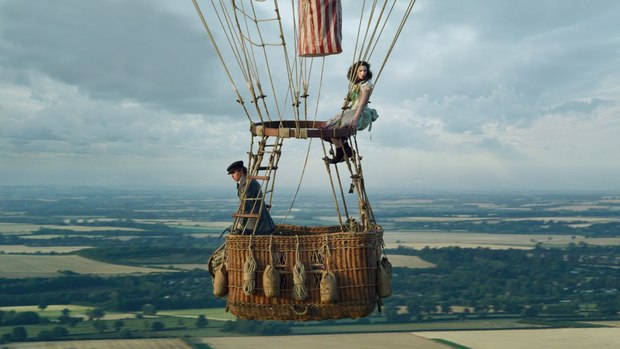 The Aeronauts, directed by Tom Harper (Wild Rose) and produced by Amazon Studios, is an aerial adventure that takes place in a gas balloon high in the skies over London Set in 1862, the film recounts the work of meteorologist James Glaisher (Eddie Redmayne) and aeronaut Amelia Wren (Felicity Jones) as they attempt to break the French record for altitude while gathering critical data for weather prediction. The Aeronauts required extensive digital augmentation to create the environments as well as digital doubles and other effects done for sequences where Redmayne and Jones couldn’t safely be filmed. Supervising the visual effects was Louis Morin, best known for his BAFTA Award-nominated contributions found in Arrival as well as his work on Sicario and Source Code.

“On every movie, you learn something, like new ways of doing things,” notes Morin. “The Aeronauts is a different beast, being a period movie that’s up and into the clouds. I didn’t have this kind of work in Arrival.  Some people thought that the opening sequence was in the clouds, but they were not real.”  The filmmakers made every effort to capture practical elements in-camera. “There are so many ways to attack a movie like this,” Morin continues. “We employed some cool methodology trying to pin down and shoot as much as possible live, knowing that a lot of it would end up in CG, like the environments.”  A tremendous amount of prep work went into planning every shot.  “In the fair scene, Felicity Jones was doing her own stunts and so was Eddie,” he says. “There’s a lot of physical stuff that was done up in the air on cranes, but that’s just the beginning of the movie. After that it’s all studio across the board until they crash land.” “Tom was really prepared, as he had made some before and after concepts, and storyboards, for every scene,” Morin reveals. “We also had The Third Floor involved early in the process doing everything that we felt was needed in previs. There was some nice previs work done for the storm sequence.”  All key people involved in the production met in London prior the movie heading into production. “They designed the top and vertical sections of the balloon,” Morin states, “There was a basket on a rig that turned around. We had many options for live parts so there was interaction; the balloon was art directed on set. Everything that came after for us needed to match that look.”

In the film, at one point during the journey, the balloon freezes. “The producers were adamant about creating this cold box with a cooling system, which we had onstage in the middle of September,” Morin recalls. “I was honest with them and said, ‘You can try all of that but at the end of the day it’s going to be all visual effects as far as the breath and cool effects of being up there in minus 20 degrees.’ During this sequence, Wren slides off the frozen balloon, becoming entangled with the roping and dangling rather precariously. “That was fairly easy because it was on rigs,” Morin states. “We had total control. Everything was bluescreen. The stunt scene was quite challenging when she is on top of the balloon and slides off. Felicity did it once, then we opted for a stunt approach. We had wide shots of a stunt double and close shots of Felicity. It’s one shot and after that, Felicity is a CG character with the camera spinning down as she’s falling off.”

Harper implemented rules regarding camera placement, movement and speed. “We could shoot as if we were in a helicopter or from the basket or as a skydiver,” Morin describes. “Tom wanted to restrain us to using ways of achieving shots that were physically possible.”  In one scene, the balloon has an unexpected encounter with a kaleidoscope of butterflies.  “We shot with a multi-camera system to create the environment,” Morin says. “It was like AR; we used an iPad on set.  However, I requested production to go back and shoot more. We went to South Africa and found a place that was basically a cloud factory. Every day, there was a formation of huge clouds. For the butterflies sequence, we shot 360 degrees across clouds and stitched those together. The guys on set wanted to use real butterflies and I told them that it wasn’t going to work. So, there are no live butterflies. They are entirely CG.” In another scene, Glaisher and Wren encounter a violent, life-threatening thunderstorm. “This was heavily storyboarded and had really nice previs,” Morin explains. “We had a fairly good sense of what we wanted. They went as far as shooting outside with the rain machines. Getting a clean plate with the rain isn’t healthy for actors. We just needed some interaction with them. The rest is a digital world.”

Digital doubles were created for the two leads. “There was some amazing stunt work done on this film,” the VFX supervisor continues. “I wouldn’t say that the digital doubles are heroes in this movie, though they were helpful on many occasions for wide shots.”

According to Morin, various plates were captured to recreate 1862 London. “I went to the top of the Thames River to shoot, knowing full well that besides the Thames River, everything was different, and we’d need a huge CG build. Framestore did a fantastic job.”

All told The Aeronauts had 668 visual effects shots that represented 80% of the film. “We had pressure because they wanted to have the film ready for the 2019 Telluride Film Festival,” Morin remarks. “The film was supposed to be a whole Framestore show, but Rodeo FX turned out to be available and I know everybody there. They jumped in too. The vendors are used to sharing assets, so collaboration was seamless. Nobody can see the difference between the balloons of Rodeo FX and Framestore.  We had one petabyte of material and the render times were incredible. Clouds are extremely complex to make look real with the raytracing and variations of shaders. We struggled a bit with that, trying to nail it down. I am quite happy with the end results. I could have spent another six months on that alone.” Rodeo FX also had a hand in the sequence where the balloon falls from the sky. “Rodeo FX had a cool workflow for the falling sequence when they’re about to crash,” Morin states. “That worked out well. It was the last quarter of post-production; we designed it as if we’re going through clouds like the Road Runner falling down from the top of a high cliff. The clouds are giving us the sensation of danger. The reality is less thrilling that what we did in the movie.”

“The biggest challenge for me was to have the audience see The Aeronauts and nobody says, ‘This looks like a bluescreen shot.  It doesn’t look real,’” Morin concludes.  “It’s not just one shot. The whole movie has to work. In creating full CG clouds, I didn’t expect nailing down something that was near photorealistic would be so complex.  I love the scene over London when they come out above the clouds. The top of the world is great because it gives us vertigo. It’s a journey. Hopefully, for people who get a chance to see The Aeronauts on the big screen, it will shine even more.”