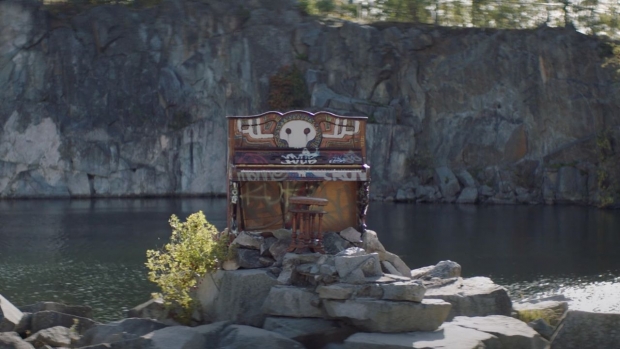 Last month’s release of the music video for Geronimo marks the directorial debut of retro-futuristic artist Simon Stålenhag. Stålenhag, of Tales from the Loop, Things from the Flood, and the Electric State fame, completed his ambitious foray into using visual effects for storytelling with the help of Jens "Duvchi" Duvsjö and Staffan Linder, VFX supervisor at Goodbye Kansas.

Penned by Duvsjö, the song’s conception was a fluid process. "I had this chord progression for the song in the back of my head for a number of years and I played it to Nadia Nair, and then all of a sudden she sang 'Sing Geronimo' and I think that was it,” says Duvsjö. From that eureka moment, Duvsjö and Nair got to work laying down the melody structure at first, which took shape in just a few hours. "That was kind of the case with songs like that - that are very intuitive,” he adds. “The whole song has this core, and it deviates and returns – staying connected to that core, so it was very easy to finish."

Once the songwriter discussed his work with Stålenhag, their collaboration fell into place as visual ideas were being shared. Stålenhag notes, "I don't even remember us ever saying the words music video. It was just very intuitive. As an illustrator and author, to talk about the ideas and visual themes of the music was nice because it was my first time doing this and it didn't put any pressure on me."

Thinking of the music video as a “visual extension” to the song made sense to Stålenhag, with brief sketches and illustrations forming the basis for the character and setting. "It was around this time,” Linder interjects, “as Stålenhag realized the storyboard and basics of the video, that Goodbye Kansas got involved. It was fairly early on." The Geronimo video focuses on an unusual looking robot in a big old coat slowly walking up to an abandoned red piano with a briefcase in hand. He sits down and opens his briefcase, picking up a set of musical notes, oddly shaped and almost out of this world. As he starts to play, the music travels down into the deep.

In translating Stålenhag's art to screen and humanizing Hector, the robotic main character, Linder explains, "That was a challenge with this character as the eyes were the only moving part except for his body. So, one of the key things I focused on was making those eyes really express something, so you transform human feelings into the motion of the lenses and so on."

Stålenhag, Duvsjö and Linder further discuss AWN the creative process between them, and how visual effects gave life back to long extinct sea creatures.

First, enjoy the “visual extension” to the song Geronimo:

AWN: Let's briefly talk about the animation, because obviously in the images you create, the characters feel very much alive and soulful, as does the character. Traditionally, the eyes are the window into the soul, so how as an animator did you approach their creation?

Staffan Linder: The eyes were one of the major challenges to the character as I wanted a technical solution so that it looked like a robot. So, we all agreed that he shouldn’t have any eyelids or anything like that; he should have lenses that went back and forth and irises that moved around the eye. We wanted the audience to feel like it was a complex technology so that he could express his feelings through the eyes.

Simon Stålenhag: I remember I had a drawing where I said, it should almost feel and look like wet eyes, but when you look closer, you see that it’s lenses, mechanics, and glass. Staffan said he had an idea, sent me a rough animation and it looked great.

The process was quite easy because it was the same thing with the underwater scenes. I only had those earlier animatics while we were shooting on location but Staffan and the team at Goodbye Kansas really made those camera movements make sense. It felt like Staffan really understood where this was going and understood the song.

AWN: In deciding if you would have an actor do the body movements of Hector, or CGI, or have Jens himself in costume, how did you approach the VFX of those elements?

SL: First it wasn’t totally clear that we were going to use Jens as the actor in the final edit or use an actor at all for that matter. We were discussing doing it fully computer generated and seeing where we ended up. We also talked about doing it totally practical with just replacing the eyes and we did a few turns of that. But we eventually concluded that we were going to do just the head and the hand replacement and that worked well, I think. And it meant we could use Jens himself as Hector.

AWN: Now let's talk about those prehistoric creatures in the quarry. I spotted a Dunkleosteus fish. What other fish were out there?

SL: With the quarry, we actually took a 3D scan of everything so we could use that for all the underwater shots and so on. And then of course we cheated with the underwater because it’s just one meter deep, but we wanted it to feel almost bottomless.

SS: I remember standing on the edge of that little quarry lake; it looks like it is very deep, but when we took the drone out and took those shots, it actually looked like it was one meter deep and really undramatic.

SL: So, we made it really deep. We also made those Devonian creatures coming up from the deep, which was a story point. Having the audience feel that they came from deep below was important.

SS: Staffan brought up a few other Devonian fish; I think we had a school of Ostracoderm fish, a Dunkleosteus fish and then the deeper you go, the more distant and prehistoric the creatures. I’m really happy with what the end result looked like.

Taking an Old-School VFX Approach in ‘All Quiet on the Western Front’
‘Natural Habitat Shorts’: Like ‘Ranger Rick,’ But for Adults
Framestore Sets Sail on ‘1899’ with New Virtual Production Tools
Animated Characters: The Art of Babbitt – Part 1
Bruce Smith and Ralph Farquhar Talk ‘The Proud Family: Louder and Prouder’ Season 2
VFX is the ‘Thing’ for Tom Turnbull on Tim Burton’s ‘Wednesday’
We Need to Chat
F is for Flake: The (Not So) Great Animation Robbery?
END_OF_DOCUMENT_TOKEN_TO_BE_REPLACED