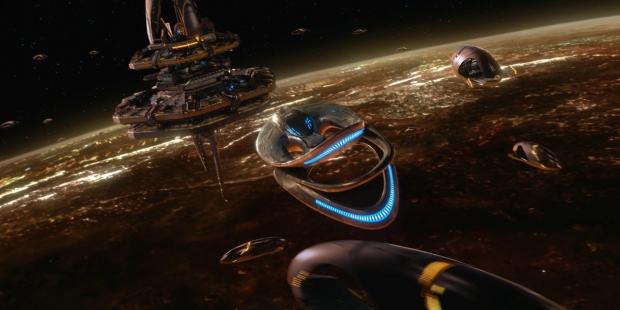 Providing his own unique comedic and dramatic twist on space exploration in the 25th century, Seth MacFarlane (The Family Guy) created - and stars as commander Ed Mercer of the Planetary Union ship, the USS Orville – in the sci-fi series, The Orville. Initially the cosmic adventures took place on Fox but the acquisition by Disney has Season 3 streaming on Hulu.  Taking part in interplanetary journey from the very beginning is VFX Producer Brooke Noska (Barry), at FuseFX for Season 1 before moving over to the production side for Seasons 2 and 3.

In the show, visual effects are a cornerstone of the storytelling. “We can’t just go to Southern California, call it Planet A and get away with it,” notes Noska.  “The Orville is unique in that you can tell so many stories within the series.  The number of visual effects is intense.  We are currently tracking for the season over 7,000 visual effects shots.  Last season we were just under 7,000 for 14 episodes that were 42 to 47 minutes network.  Now we’re 10 episodes that are mostly over an hour plus where we’re in space discovering all these different environments.”

Three years have been spent in post-production for Season 3.  “As soon as the [COVID-19 lockdown] hit on March 13th, we took materials and went home,” recalls Noska.  “Two weeks turned into two years.  The pandemic was a godsend because we were still in the moving and grooving of network television where we were block shooting and having the break allowed us to get post back on track.  The post team is onset making sure that the pieces are put in the right spot so we can do it afterwards as well trying to manage our vendors and internal team.  Episode 304 was a huge testament to having that COVID-19 break from production, allowing us to dive in and build [the planet of] Krill.”  Also beneficial was switching media platforms. “Shows never get finished on broadcast network. You have to hurry up, hit those dates, and its just out there in the world.  With streaming we were able to have a voice in the conversation.  We didn’t want to do the same thing somewhere new.  We wanted to do something new but the same!” For believability, worlds cannot look too alien.  “Southern California has a lot of different places that look unearthly, but we have to have an anchor point to bring it back to reality,” remarks Noska.  “A lot of our environments are encompassed on the stage built by the set department and art directors, so there are numerous concepts and conversations between visual effects, art department, directors, writers, and producers to make sure that we all believe this.  The same is with makeup effects and our new creatures.  You can’t have anything that looks too wild and crazy because it will take you out of the story.  Yaphit is a moving ball of goo but has a personality and is so silly and weird that you go, ‘This makes sense!’”

Central to the show is how it walks the thin line between homage and parody.  “We don’t want it to look exactly like the original Star Wars where you go, ‘This is a puppet.’  But we also don’t want it to look so CG that you don’t believe it.  A lot of coordination and collaboration takes place between the makeup effects department and us to create a hybrid of what is realistic because its basically there and what is a [digitally] added feature. Unk is a full suit guy, but we helped to articulate his mouth, hands, and feet movements because otherwise it looks like Barney walking around!”

Virtual production was not a viable option.  “I partnered with the USC team which was doing a pandemic project and what we found is you can’t just insert this technology to save a show that is already in progress,” notes Noska.  “You have to plan for it.  That was the awakening the television industry got. It was just like that everybody thought that visual effects were going save us from the pandemic.  There were so many silly reels that were going around the studio.  ‘If you put a green sock on this guy’s head then visual effects would put the face on there and you can have two people.’ I was like, ‘We can’t do that! We didn’t use virtual production because we had three stages of sets, a ship, a half set for engineering, space set for the different environments that swing in and out, and shuttle bay.  We had already built and established these sets.  We couldn’t use virtual production for this season because of going to so many different places.” The “New Horizons” subtitle for Season 3 has been fully embraced.  “We have built so many worlds that I’m honestly floored that we made it this far because you don’t see this many environments that are so intricately developed and detailed out for a TV series,” Noska shares.  “Different from previous seasons, we’re only on the ship for two episodes.  The Orville has taken leaps into creativity, imagination, and exploration that I haven’t seen in any sci-fi series before because we’re going everywhere!”  A hybrid approach was adopted for worldbuilding.  “In Episode 302 the art department took the lead on what they could build for the maze, and we helped to make it feel organic and going everywhere,” Noska reveals. “For Episode 303, we took the lead on the transitions between the different environments, like from the bridge to the desert because it was mostly digital.”

A playback unit is responsible for the UI that is displayed onset. “We would do a lot of onset composites to make sure that something worked because we only had an environment or stunt performer for one day,” Noska says. “Brandon Fayette [digital effects supervisor] designed an app that would put the ship in the camera to make sure that we weren’t cutting the top of it.  It was also a digital eyeline tool for where Yaphit would be.  We used a lot of homegrown technology that has been integrated into our process. A lot of it was old school techniques but we inserted a new shiny bit ever so often.”

Getting a major upgrade is the USS Orville, which was given 40,000 panel lines to make it look better.  “For the first season we had a physical ship and did motion capture but because we changed the design aesthetics of our ships so much this season, they became obsolete assets,” remarks Noska.  “This season we built all the hallways, rooms, and bridge. We put a lot of detail and heart and soul into the design so when watching the episode again viewers will see a detail that they didn’t notice before which makes it feel like a real-life place.” A science advisor was part of the production team. According to Noska, “There is quite a bit of scientific research that goes into things but obviously space battles no one knows, so it really is what looks cool and is going to get the fans excited about it?  The different terms like sunlight stars or what stars look like in the orbit of a planet or going at quantum we did do a lot of R&D so it would appear as what scientists have predicted it would look like.”

Zero-G is a nonfactor for the series.  “The closest thing was when we were underwater, so we were fortunate to shoot in an underwater tank because at the end of day, real is real,” Noska shares. “There were only a few shots where we had to go in and do character augmentation or full CG shots because the water tank can only take you so far and a person can only hold their breath for so long.  The previs team assisted in setting that up.  It helped to provide the assets to show what we’re thinking will work in the cut, our editor would assemble it, and we would show it to Seth.  That became our game plan.”

Logistics issues overshadowed everything, especially when trying to accomplish the major creative and storytelling ambitions with a remote workflow.  “When the pandemic hit, we had this massive show and all of these people are in separate places,” states Noska.  “How do we make that work?  It was a lot of leaning on IT and individuals playing the honor game.  It feels that we have figured out the logistics for this season successfully. We went from four visual effects vendors to 14 within the last eight months; that was another logistics puzzle piece the team handled with grace.”

Showcasing the planet of Krill is a series highlight. “They have been such the baddies for so long that revealing their world and culture is so exciting because everybody thought it was taboo,” Noska muses. “There is marketplace, and they have a ‘democracy’.  What does that look like?  It’s ancient Greece and Roman but is also a little American.  It's a melting pot of cultures that we can all relate to that.  No one knew what was underneath the Krill besides that they’re angry at us all the time.  I’m excited for people to see the Krill environment because it was such a collaboration.  We went off the Fox lot to a different stage and built Krill.  We go through the entire city!  It’s so great.”