In Part 2 of our interview with the Guy Williams and Mark Gee, the visual effects supervisors talk about their equally impressive non-avian creations for the critically acclaimed DCEU spinoff series now streaming on HBO Max. 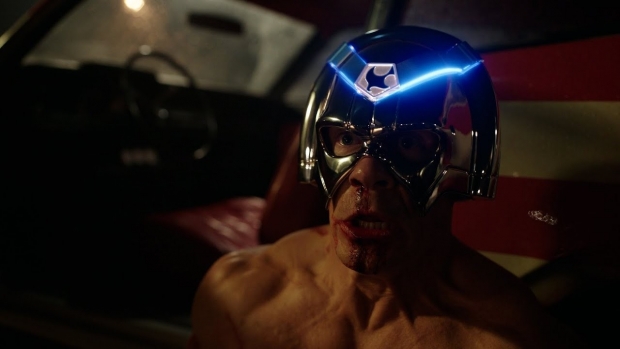 In Part 1 of our interview with Wētā FX visual effects supervisors Guy Williams and Mark Gee, A Raptor for All Seasons: The Creation of ‘Peacemaker’s Eagly, they talked the painstaking effort that went into creating the hero’s scene-stealing pet bald eagle, Eagly, on HBO Max’s action packed and rather ribald series, Peacemaker. Created by James Gunn, who wrote and directed The Suicide Squad, the show premiered on the streamer this past January 13, with a second season slated for release next year.

Yet, while the show’s redoubtable raptor clearly has pride of place in the Wētā FX team’s accomplishments in this new DC Extended Universe series, other elements that played a significant role in the narrative presented their own set of challenges, which often required ingenious solutions. For example:

AWN: In Episode 1, Peacemaker’s father Auggie Smith (Rob Patrick) first reveals the “quantum closet” – the endlessly extending area where he stores helmets and weapons. What concepts or designs did you start with and what, if any, direction were you given?

Mark Gee: Conceptually, they did shoot a set that encompassed Rob Patrick, and that was about it. It was a bit of a creative exercise. James [Gunn] gave us a briefing on what he wanted – it started off as an infinite closet, where you'd go off into infinite space. So we started by building this closet back, populating it with all the cabinets, and then having it fall off into darkness. But it just wasn't working. Then we tried putting in a drawer back there and all these lights, playing it more like a city. In the end, we ended up going with this white ceiling, which was actually one of the producer’s ideas. When he came up with it, we thought, "Oh, this is not going to work." But when we got in there, it actually worked. And it really complemented the lighting as well.

Guy Williams: We tried putting in star fields, putting in galaxies – we put in all these things to say, this is a magical space and you're sitting on a platform out in the middle of nowhere. We did all this artwork. And then the producer said, “What if we just put warehouse lights overhead?” And no one really thought it would work, but we did the artwork. And the second we saw it, we were just like, "Oh my God, it actually makes sense." Because it gave you vanishing lines in the stock. For all the shots where you're down inside the cabinets, you can actually understand that this thing is infinitely large, because instead of seeing the ceiling lights going for 10 panels and then stopping at a wall, you see them just recede to the point where you can't even delineate the individual panels anymore. In its own bizarre way, it was the perfect solution. AWN: And of course that's where Peacemaker gets his various helmets, which you also did. How well-defined were those before you started working on them?

GW: The helmets were modeled on set by the prop team. The attention to detail they put into them was amazing – each helmet looked the same, but different. They all looked like they belonged with Peacemaker’s outfit, even though each one was unique. The art department and the props department did an amazing job of fabricating them. We were just able to scan them and use them to build from. Also, James's scripts spelled out the function of every helmet in the series. The freedom that we had was in how we visualized the details – what lights came on, what the magical effects looked like.

One interesting story about the helmets – specifically the X-ray vision helmet – is we were trying to figure out the quickest and cheapest way to create the X-ray shots. Normally we'll shoot it in black and white, and just put a skeleton inside of it, but the only way to make it look really good is to use a lot of CG. So we were really dubious about the process. Then we happened to see a music video where they just chucked a couple of skeletons inside of imagery, and it looked really good. We finally figured out that they had shot it with thermal cameras.

In the show I shot before Suicide Squad, we had used a thermal camera for a few shots. It wasn’t the easiest thing, but with some good planning on the production side, you can pull it off. So they shot all the X-ray vision stuff with thermal cameras, and it just came out looking great. You just chuck a skeleton and some intestines and a brain and a beating heart in there, and you get a proper X-ray. It worked out really well.

AWN: Speaking of hearts, when you have a project like this that has so much blood and gore, how do you approach what to show? How do you know how graphic to make it or how cartoony to make it?

GW: It’s really easy to find images of dead people on the web – although I don’t suggest that anybody try. And there's a certain authenticity to death that is incredibly horrific and shocking, especially when it's a graphic death. When you're making a movie, as much as you're trying to be shocking and gory, you don't want people to feel so repulsed that they walk out. So when, say, you chop off somebody's leg, it comes off cleanly and there's a little bit of blood that spurts out – it's not as visceral as a real person's leg getting ripped off. When somebody's shot in the face, there's certain things that happen that you don't want to see. So when we get into that stuff, we want it to look real, but like a real practical effect, as opposed to a real person's death. AWN: I imagine this is another area where the collaboration with the director is pretty important, because it can be a fine line between what's visceral to the point of being uncomfortable, versus what’s enough to get the point across without being too much.

GW: It definitely is. When we worked with James on Suicide Squad, there was a very graphic death of a character. The first half of the death wound up being cut out of the movie because it was too graphic, and the feeling was that it had gone that little bit too far. It also wasn't necessary in order to show this bad guy getting his comeuppance in a brutal way. The second half was done in a less realistic way – it was more fantastical. So we took all what we learned on that film, and we applied it to Peacemaker. For example, when we did a senator who has his face shot off and, as he’s lying on the ground, a butterfly crawls out of the side of his brain, we didn't model the skull and put a brain inside of it and do proper simulation with skin and everything. So, while you're always looking for a way to add more buckets of blood, you don’t necessarily want to show every organ that belongs in that part of the body. AWN: Apart from Eagly, which you said was the biggest single challenge for you, were there other components that were especially demanding?

MG: The cat-cow came into its own at the end, and there were quite a few challenges there, due to the large scale and the complexity of the scenes.

GW: They were just digital challenges, but trying to make a 300-foot-long caterpillar that's being milked for its nectar not only seem real, but relatable, took some doing. There was a lot of back and forth, and a lot of plussing up, trying to get the reality into it.

And I'll just say – and I’ve said it a thousand times – window comps. They're the hardest thing in the world to do. Because you never shoot the plate right, so you're always trying to make the exposures look right. When you put a camera on a car and drive it through a neighborhood, it's hard to make that look the same as when you're doing it on a greenscreen. MG: Honestly, apart from the stress of Eagly at the beginning, once everything was working and everyone was happy, it was one of the funnest projects that I've worked on. Suicide Squad was great, but this was just another level. It was such a fun story, and John was great, and I just enjoyed bringing everything to life.

GW: It’s obvious that everyone had fun making the series, and that fun never died away. All the way through post-production, everybody just gave 100%. It made it a very enjoyable project to be on.