John Nolan, a trainee 22 years ago on ‘Walking with Dinosaurs,’ returns to the world of mechanical saurians to produce 48 creatures from 12 species, including a 22-foot-high Giganotosaurus with a head the size of a transit van, in Colin Trevorrow and Universal’s latest dino epic. 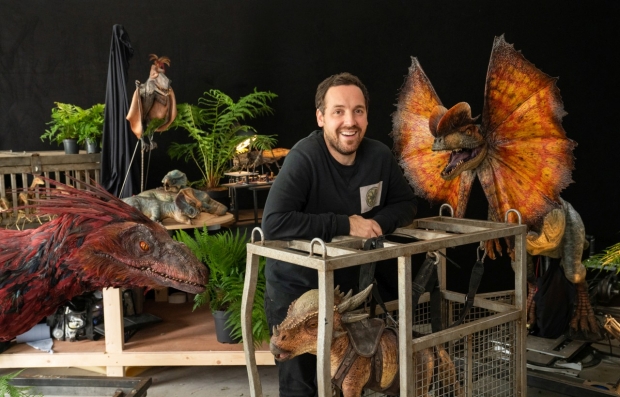 Starting out in the industry as an animatronic trainee, John Nolan worked on the television miniseries documentary Walking with Dinosaurs before eventually founding the John Nolan Studio, which produces animatronics and creature effects for films, TV, live performances and private commissions. Universal’s latest dino-adventure, Jurassic World Dominion, has reunited him with the prehistoric beasts after a 22-year absence, bringing his career full circle. “Very true – I guess it has!” he shares about his return to the world of the gigantic prehistoric creatures. “Walking with Dinosaurs was my first job out of university, with 40 creatures and Jez Harris, who is known for dinosaurs in our country. Other than an alternative for meat commercial with a T-Rex on a woman’s head, I haven’t done dinosaurs since!  Walking into Pinewood and having an interview with Colin Trevorrow, he shook my hand and asked, ‘Do you want to make dinosaurs?’  I said, ‘Yes.’ That was it.  I don’t know if I’ve ever been asked if I liked dinosaurs since I was five years old and was happy.  What a wonderful list of things to create in camera.”

The technology has radically changed when it comes to manufacturing animatronics.  “We had to make 12 copies in this film, so you design one and cut 12 out using CNC machines, water cut jets, and 3D printing,” Nolan explains. “It’s so good that technology is evolving this quickly, especially 3D printing and the quality of the software. What is so good about Jurassic World Dominion now compared to the original [Jurassic Park] film in 1993 is all our process, software, and the way we work, the editing overlaps with all of the different departments.  ILM uses ZBrush to sculpt their dinosaurs and we use the same program.  We also work with special effects and Paul Corbould and his team so we can share our files.  It allows us to become one department rather than three departments designing the same dinosaur but in completely different ways.”

Production designer Kevin Jenkins designed the dinosaurs, which were given to production VFX supervisor David Vickery and ILM, who made sure they were anatomically correct before handing them over to Nolan to produce the animatronic. Key to the tight team collaboration was making sure there was a seamless integration between the digital augmentation and practical effect. “What I love about this film is you can’t work out which dinosaurs are in camera and which ones are done with CG in post,” notes Nolan. “There are so many overlaps between the different disciplines.  The Giganotosaurus was a character that was completely CG but we knew that Colin wanted to achieve some of the close-ups with an animatronic head.  We decided to build the head, neck, and some of the spine, which allowed Colin and cinematographer John Schwartzman to shoot a lot of it in camera, not only the close-ups but some of the wide shots as well.  Visual effects would extend that and add the backend of the dinosaur with their animated version.  What allowed us to do that was the fact that our practical head and neck performed using the animation program that controlled our motors so ILM knew that the practical puppet was moving exactly in the same way as the animated version.  It was down to our puppeteers and the animators at ILM to having an understanding of how the dinosaur would move along with Colin and Steve Brusatte, the paleontologist.”

A huge animatronic was produced for the Giganotosaurus.  “We said that we needed six months but because of COVID-19, and it ended up being three months,” reveals Nolan.  “Visual effects, creature effects, and special effects pulled together and using the same files, made this crazy dinosaur that is 22 feet high, with a head the size of a transit van, a tongue the size of a surfboard, and eyes a record 12 inches wide. It was massive!”

Nolan took a scale version of model into the production meetings, performing with the small animatronic to everyone could understand how much movement could be achieved. “That animatronic was based on all of the pivot points that were in the visual effects model.  We gave that scaled model to Paul Corbould, who built a huge hydraulic control neck that could then take the weight of a two-ton head on the end. The skin on the animatronic is a ton itself.  10 centimeters thick.  We had silicone inside the mouth so it looked translucent and had water for salvia.  It was nerve-racking and a challenge but I’m happy that we got the opportunity to do it because much like 1993, when you see the T-Rex in the rain, now we get to see the Giga and it looked incredible onset.  It felt like a Jurassic movie.” Making an appearance is the juvenile Velociraptor called Beta. “Beta is a clone of Blue but smaller,” Nolan says.  “We would look at the way Blue moved as a visual effects character. Once we made the puppet there were weeks of working out with our puppeteering team on how Beta would move. I love Beta. What a lovely character.  The size of it and the amount we were able to achieve in camera.  The whole head was printed in 3D.  The eyes moved back into the sockets and blinked. It snarls.”

Nolan also had fun creating the Dilophosaurus. “It’s a fan favorite and we haven’t seen it as a character since the original film,” he notes. “It’s a hologram in the last film.  Colin wanted multiple Dilophosaurus for the scene and also to have it stalking around.  We didn’t see that character walking around in the original film. We ended up referencing some of the pictures that we found online. I did attempt to have someone wear it on a harness but it proved to be too heavy.  Although the technology has allowed us to create better and bigger dinosaurs, what we don’t want to do is stray too far from the character in the original film.  Colin did ask us to see if we could get it to walk and that’s something we did.”

48 dinosaurs from 12 species were created by Nolan over a period of 18 months.  “Working with someone like David Vickery and Colin Trevorrow, a lot of the films they grew-up on, including Jurassic Park, were heavily animatronic and practical films back in the day,” states Nolan.  “It’s obvious that they’re referencing those films and that’s why animatronics has had a bit of a resurgence because directors of our age are referencing things from the 1980s. What I love about David Vickery and ILM is that they’re not all about CG. If David, ILM, and Colin believe we can get it in camera then that’s the way we do it.  They can enhance it if needed or just leave the shots as they are.  There is a wonderful understanding between our departments.  It was more about integration of all the different ways of working.”