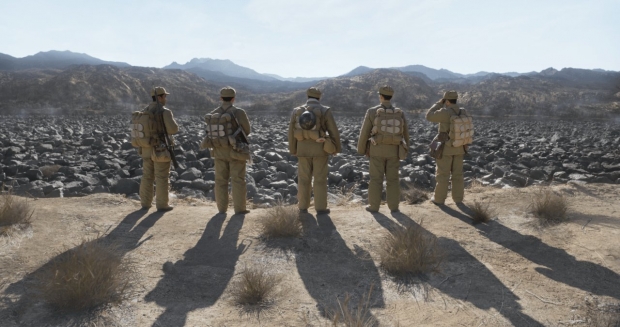 At a reported cost of $200 million, the Korean War drama, The Battle at Lake Changjin is the most expensive Chinese film ever made. With a worldwide cume of over $913 million, it has quickly become the second highest grossing film of 2021 and the highest grossing Chinese film in history. The story, commissioned by the Chinese Communist Party’s publicity department to celebrate the 100th Anniversary of the Chinese Communist Party, is a fictionalized telling of the bloody 1950 Battle of the Chosin Reservoir where Chinese soldiers caused American troops to retreat during the early stages of the war.

The massive undertaking had a trio directors - Chen Kaige, Tsui Hark and Dante Lam - with visual effects created by Scanline VFX, DNEG, Asymetric VFX and Terminal FX supervised by Dennis Yeung. “In this project, we created two movies [The Battle at Lake Changjin 2: Water Gate Bridge was released on Feb. 1, 2022] in 10 months, and the films also covered a large number of CG shot,” states Yeung.  “In addition to the huge workload, the shooting environment was also different from the previous project experience. Most of the shooting sites were in the suburbs, and we shot many night scenes. The difficult climate and high-intensity work made the number of our standby staff several times more. Moreover, our works reflect the history, so there were many details in the shooting scenes, such as the model of the car and the clothes of the soldiers, which should be strictly under the historical data, so our early shooting preparation also had a huge workload.”

The project required an extensive amount of previs and postvis. “Because of the limitation of time, we took the core CG teams to the location, including the Unreal Engine team, color grading, and so on, to cooperate with the directors to prepare for previs and postvis,” remarks Yeung.  “What’s more, we also developed a highspeed storage network with 10GB and 120TB cloud storage onset, hoping that the previs and postvis could be carried out at the same time, and it was also helpful for the directors to confirm the progress of daily work then share the results with all vendors.” Working alongside Yeung was Scanline VFX supervisor Adam Balentine. “Dante Lam had a clear vision for our sequences and provided Scanline with detailed previs,” he notes, “in addition to other visual reference for the overall look and feel.”  Like with so many productions, post-production was seriously impacted by the COVID-19 pandemic.  “Because of the coronavirus, our communication was more difficult because we couldn’t directly articulate our thoughts face-to-face because,” Balentine says, “Besides, the customs clearance time had increased by [so] many flights [getting] canceled; it was difficult and slow for us to transfer material, as time management became a big challenge.”

Balentine and his team used the Eyeline review system to help work remotely. According to the VFX supervisor, “We can conduct meetings virtually between any of our global facilities and it enabled us to continue creating top tier visual effects even during the pandemic.”

In addition to researching the history of the battle, Scanline compiled a library of visual reference material cataloging the environment in the area around Lake Changjin. “From the look of the mountains to the species of trees and other plants, we wanted to be as accurate as possible,” Balantine says. That accuracy aided the studio’s creation of 32 visual effects shots. “The biggest technical challenge of our work on the show was definitely the 4000 frame ‘oner’ shot of the soldiers being attacked while crossing the dry river bed,” Balentine shares. “It was challenging to figure out how to seamlessly stitch together 15 plates shot in a variety of methods from handheld cameras to drones, along with sections that were fully computer generated.  The shot turned out great, despite the technical difficulty and the tight schedule.”

Balentine notes that in order to make the oner more manageable it was broken into sub-shots “that could later be stitched together into the final shot. This method of working allowed multiple artists to work simultaneously and allowed us to complete the work much faster.” Producing the fully CG sections of the shot was especially difficult.  “Keeping a fluid seamless motion between the in camera plates was tricky to say the least,” Balentine explains. “Technically the shot was challenging from almost every way.  From tracking the handheld and drone plates to roto animation of the many characters and objects we needed in order to do the CG takeovers.”

Stitching of the riverbed shot was aided by previs provided by the production team. “Detailed tracking and roto animation of the set and characters enabled our layout artists to stitch the shots together in 3D space,” notes Balentine. “Without the intricate tracking data it would have been extremely difficult to do the final stitch.”  A vast riverbed set was created consisting of carefully placed rocks. “This set covered the area occupied by the actors.  Everything beyond the actors was created digitally.  The rocks, mountains, trees, and riverbank, we fully modeled and textured to give us the flexibility to move cameras around as needed and to not feel constrained to angles that would only work in two dimensions.  There was a lot of work put into the models and textures of the environment by both our environments team.  We also created many hero digital doubles, along with their weapons and other battle equipment.  These needed to be extremely detailed and photorealistic in order to work for our CG takeovers.” The aerial plane shots were conceived in layout and were based on reference provided by the production team.  “Based on these layouts we were then able to determine the scope of the 3D environment build we would need in order to make these shots look photoreal,” remarks Balentine.  “We also created two highly detailed Corsair planes, which were some of my favorite assets developed for the film.  They were truly impressive.”  Spectacular special effects explosions were captured in camera.  “We did end up augmenting these with some CG explosions created in Houdini,” Balentine says. “There was a lot of work put into making these feel as close as possible to the in camera explosions in terms of look and scale.”

Balentine is proud of the riverbed sequence, concluding, “I’m sure it will look great in theaters.  I did particularly like the way our Corsair shots turned out, but really the whole sequence turned out amazingly well and I’m very happy with our work.”

‘Natural Habitat Shorts’: Like ‘Ranger Rick,’ But for Adults
Framestore Sets Sail on ‘1899’ with New Virtual Production Tools
Animated Characters: The Art of Babbitt – Part 1
Bruce Smith and Ralph Farquhar Talk ‘The Proud Family: Louder and Prouder’ Season 2
VFX is the ‘Thing’ for Tom Turnbull on Tim Burton’s ‘Wednesday’
We Need to Chat
Choc Chip Animation Riffs on Pop Culture in ‘The Art of Murder’
F is for Flake: The (Not So) Great Animation Robbery?
END_OF_DOCUMENT_TOKEN_TO_BE_REPLACED