On the Road to the 93rd Oscars: The Visual Effects Nominees

‘Love and Monsters,’ ‘The Midnight Sky,’ ‘Mulan,’ ‘The One and Only Ivan,’ and ‘Tenet’ vie for this year’s Best Visual Effects Oscar. 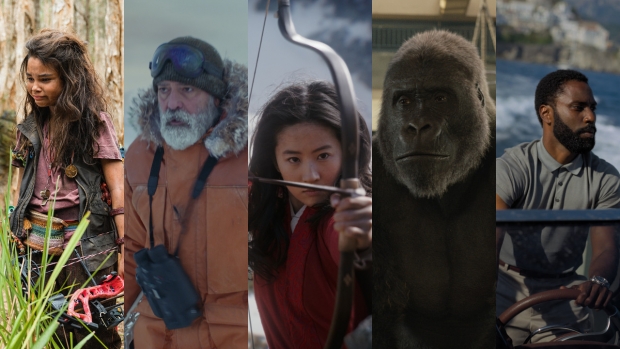 With cinemas shut down for the majority of 2020, the 93rd Academy Awards had to modify theatrical run qualification requirements to ensure a fair and comprehensive nomination field; taking firm advantage of the change, for example, Netflix has received 35 nominations, compared to 24 it received last year. But for the most part, this has been a tough year for VFX, with many tentpole films like Black Widow and Dune pushed far into 2021.

But we still saw great work, much of it produced during a relentless pandemic. This year’s nominees for Best Visual Effects reflect a set of diverse films that eventually found their way to audiences. In addition to The Midnight Sky’s run on Netflix, we had Mulan in theatres and Disney+; Tenet and Love and Monsters in theatres only; and The One and Only Ivan exclusively on Disney+. While Mulan, The Midnight Sky, and Tenet are not surprising nominations, The One and Only Ivan and Love and Monsters both got the upset nod over the likes of Greyhound and News of the World (which ironically both star Tom Hanks). You just never know what lies in the hearts and minds of Academy voters.

Christopher Nolan downplaying the visual effects in his movies could well hinder Tenet, though this was not the case for Inception and Interstellar.  If not Tenet, it may well be a battle between the futuristic apocalypse of The Midnight Sky and the epic historical saga of Mulan. Here is a look at feature film visual effects that range from invisible environmental work to a photoreal CG animal playing a film’s title character. Serving as the production visual effects supervisor was Matt Sloan, with Mr. X handling some 550 shots.   “We wanted the creatures to be at least semi-recognizable so there was a lot of research into bugs and general gross detail stuff like rare diseases, cancerous growths, and deformities,” Sloan shares.  “We even had a compilation video of dead bloated whales exploding under their own internal pressure!”  The most difficult creature to execute technically and creatively was the large centipede known as Siren.  “Getting her rigged with all the interlocking shell segments and dozens of segmented legs and getting her animated to the framing that we had was particularly challenging,” Sloan continues. “She bursts up out of the ground so there was a ton of complex dirt, leaves, and forest floor matter that needed to be added digitally for her interaction.  World building was an important part of the plan.  We had multiple matte painting shots showing the wider destroyed world, but there were a lot of more subtle effects in there as well such as dirtying down buildings and adding giant egg sacs.”

The biggest challenge was having most of the creatures being seen in broad daylight. “There's nowhere to hide in that situation,” Sloan reveals. “All the textures, and every bump and scar can be scrutinized. The attention to detail that went into every creature in the design and modelling/texturing phase was crazy!” Over 1,400 visual effects shots were produced by Framestore, ILM, One of Us, ILM, Instinctual VFX, and Nviz under the supervision of Matt Kasmir and Christopher Lawrence.  “I don’t know if it was a flippant comment from Chris, but in one of our early meetings with Framestore he said to me, ‘In a perfect world you would just shoot their heads and we’d animate everything digitally. At least we could own and control it,’” recalls Kasmir.  “That stuck in my head.  We discovered the Anyma system from StageCraft could take a performance the same way that you scan a digital double on ClearView.  Once we got our previs, we literally went through and tried to cull as many practical beats within shots as possible and commit to those being digital and hope that it worked.”

A dramatic death scene has blood floating in zero-gravity. “It had to be beautiful and not scary,” Kasmir added. “Even though one of our characters is dying, she is actually hypnotized by the beauty of her blood in zero-gravity around her.  Everyone stops for a beat. It’s very graceful.  George Clooney started to give each piece of blood names. We would physically direct pieces of blood. Blobby #1. Spider Blob. One became so popular to track, it was more fun than the cast!” Unlike the original Disney animated feature, there are no musical numbers in the live-action adaptation. But there are plenty of action sequences. Overseeing 2,043 visual effects shots was Sean Faden, who recruited Weta Digital, Sony Pictures Imageworks, Image Engine, and Framestore for the project.  “I was leery of visual effects,” admits filmmaker Niki Caro. “I’m an in cameral girl and the film was built more like Lawrence of Arabia than Marvel.  We were out in real landscapes and had real horses charging across real battlegrounds and real actors and stuntpeople. Sean Faden appreciated and embraced the need for visual effects to be subtle and integrated into the real world.”  Elements of fantasy do exist in this cinematic rendition.  “In having the Witch turning into the hawk, or into a murmuration, we tried to use more photographic means to transition things,” explains Faden.  “For the language of the Witch changing into different things, we either used shadows or the extreme mirage effects that we’ve got with this 2800mm lens.”

An avalanche brings a battle sequence to a dramatic conclusion.  “We had to design the avalanche so it would lose some of it’s deadliness before it got to the Chinese army that was running away from it,” Faden adds. “The solution was to create a big gulley at the base of the mountain so when the avalanche reaches the bottom, it shoots up and a lot of that energy is dissipated upward. But there is a flow of ice and debris that still has momentum, so it remains something you didn’t wanted to get caught up in.” He continues, “The biggest challenge on this was finding a tone with the visual effects that could support and not outshine the grand scope the photography but also expand it where necessary.” The One and Only Ivan

Photorealistic CG animals have become a staple of visual effects, with MPC a recognized leader. However, creating the film’s title character was far from routine.  “One of the trickiest things to figure out was the level of anthropomorphic identity we were we going to give these animals,” notes VFX Supervisor Nick Davis, who was responsible for 1,005 visual effects shots.  “It was easier with Ivan because his inherent nature is anthropomorphic. As humans, we can relate to him quite well because he has eyes in the same place that have a sclera.  The challenges of Bob and Snickers were much harder because dogs are something that we are used to looking at every day.  We put a lot of time, effort, and care into balancing a delicate tightrope between being photorealistic, anthropomorphic, and having character and personality while being extremely close to the animals.”

Half of the film’s screen time takes place in fully CG environments.  According to Davis, “For that part of the movie, we decided to have a virtual photography pipeline. To do that we had to exactly match the live-action sets in different lighting settings.”  Scenes were blocked out by doing black box rehearsals with puppets and performance artists.  “Once director Thea Sharrock was happy how the scene would playout, we would go to a motion-capture stage with a precisely marked out set and then capture Ivan’s performance.  The mocap performer would be acting to a soundtrack of the real voice artist and we had puppets for eyelines.  That was passed on to the MPC animators, who would animate the secondary characters.  We would build them up until we had 360 degrees master clips and clean-up Ivan’s motion-capture data.  The whole thing was rendered in the Unity game engine and taken onto the virtual stage where the director, DP, and camera operators were given virtual cranes, dollies, Steadicam, and focus pulls.  Scene by scene we reshot these virtual scenes.  All the coverage would go to the editor and he would edit together like a normal scene.” Practical effects take precedent for director Christopher Nolan, but there are still almost 300 visual effects shots produced by Andrew Jackson and DNEG to help sell the concept of time inversion as well as the epic scope of the storytelling.  “What I did early on was block out the car chase scene in Maya, like a bird eye’s view previs, of where all of the cars were, the timings, which cars were forward and backwards and where the people were,” recalls Jackson.  “It immediately became apparent that was an incredibly valuable process because you could scrub forward and backwards through the timeline from anyone’s point of view.”

There was a methodology to the principal photography. “What we would always do is pick the thing that is hardest to do backwards and perform that forward,” Jackson explains. “In that car chase scene, we had a backwards version of every car that could drive at a high speed in reverse. We were always looking for ways to film real events that have a little twist which makes them unusual or interesting.  We had this idea that there is a 70/30 percent pushback from the real world on the inverted thing.  If you look closely at some of the bullet hits there are little bits of debris falling up into the hole because it is still forming.”  A 10-story building explodes and implodes simultaneously.  “We built two large 1/3 scale 10 story buildings and filmed both being blown up from matching camera angles so we could reverse one of those and composite them together.  When shooting the end battle, we could not actually have a Chinook helicopter fly with a shipping container with people inside. So, we had a crane lower the containers for the last little bit and added full CG Chinooks above them for those shots.”