On the Road to the 90th Oscars: The VFX of ‘Kong: Skull Island’

VFXWorld takes a closer look at the Oscar-nominated effects that brought the biggest version of King Kong ever to the big screen. 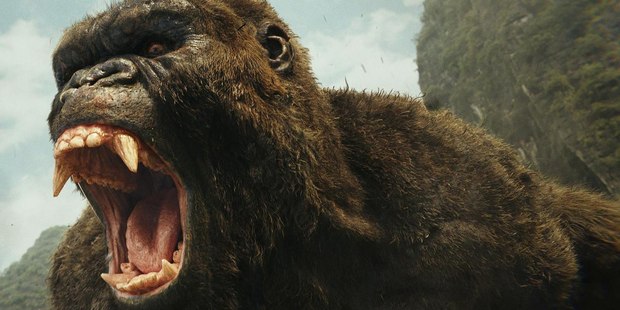 Rather than Kong running rampant and causing destruction in cities, the premise gets inverted as humans invade the titular beast’s homeland of Skull Island with the same disastrous results. The emphasis is on spectacle, delivering the biggest version of King Kong ever to the big screen, with homages to the 1933 monster classic as well as the Vietnam War-era Apocalypse Now.

VFX powerhouse Industrial Light & Magic led the way, producing 744 shots for Kong: Skull Island and subcontracted work to Hybride and Rodeo FX, while previs/postvis for the production was provided by The Third Floor. The entire effort was overseen by senior visual effects supervisor Stephen Rosenbaum and visual effects supervisor Jeff White, both of whom -- alongside ILM animation supervisor Scott Benza and special effects coordinator Mike Meinardus -- have been nominated for an Academy Award in this year’s VFX Oscar race.

Here’s a closer look at some of the biggest visual effects sequences created for the movie, including breakdowns from ILM and Rodeo FX, along with a slew of images and animated GIFs showcasing the craft and artistry behind each shot.

“For the Athena shot we used a basic Athena asset supplied by ILM and created set extensions for shots in and around the boat. We then added Huey Helicopters, a CG Boeing Chinook, Sikorsky Sea Stallion and CG crewmembers on deck. There was also was a real size model of the deck and a part of the bridge that had already been built on location.

“Our FX team created water environments and simulated the water interaction between the hull of the boat and the ocean. Houdini was particularly helpful to create the waves hitting the bow and was also used for the interactions on the sides, and behind the boat.

“To create the helicopters, we ingested ILM assets and placed them into our pipeline for the sequences that used the same models. Some of the final models were done at Hybride; we received basic geometry and our modeling team finalized the boat models (for both the Athena and the Wanderer). We looked up references of boats and boat wrecks to finalize the modeling of the vessel, including all the details we needed to make them look real.”

“The beached ship repurposed as an Iwi shrine to Kong, the SS Wanderer, is named after the boat that travels to Skull Island in the novelization of the original 1933 film. On set, the Iwi village was comprised of a few tents and native artifacts. Our job was to create CG tent models and extend the village in size. Using our in-house crowd system, we added villagers to populate the space.

“The village is surrounded by tall mountains, some of which needed to be added in CG to create the illusion that the village tucked in underneath. The Iwi village is also protected by a huge wall of logs that was entirely built in CG along with digital set extensions, CG villagers, clouds and smoke from the fires and the shipwrecked steamer, the Wanderer. We created set extensions for the village and inserted CG wall and Wanderer assets, and we also added CG vegetation around them to ensure the integrations would be seamless.”

“Early in production we received artwork depicting the Spore Mantis. As a first step, our modeling team set out to build a 3D version of the creature depicted in the artwork. We were lucky to have a lot of creative input on the creature. It was especially challenging to get the leg and body junction to look believable. After that, we’d send the rendered image to ILM so their concept artists could paint over it and ask for design tweaks. After a bit of back and forth between the ILM concept artists and our modeling team, we received creative approval for the model.

“Hybride artists added a head and legs to a body that had been rigged to stand up on set, and created an entirely CG creature for the shots where we see it moving away. Using proprietary software called Ecosystem, we covered the insect’s body with moss and vegetation. Since the creature had been lying in the forest for a long time, there were a lot of debris, dead leaves and moss on top of it, so we created a lot of dirt and moss effects rolling from its back and belly. We also had to have its feet interact with the dead leaves on the ground.”

“For the wall opening for the boat, we thought of a system using counterweights, with big boulders attached to vines being moved up and down to raise a series of logs from the water. A simple rig of the logs with a rotation offset enabled the animators to create a beautiful animation of the opening door. Pulled by the center, the logs were animated offset, creating a wave-like opening to let the visitors float trough the immense wall hanging over the water. We also produced water simulations for when the logs interact with the river from the plate.”

“During the prologue, we see a young Hank Marlow (Will Brittain) crashing into a beach after an implied dogfight between him and a Japanese Zero. For this scene, special effects rigged an explosion, blowing up a full-scale P-51 at a beach location in Australia. Our team stepped in to animate the crash landing, which included generating the sand blast from the crash and explosion and tapering off the smoke and fire elements from shot to shot.”

“Our environment artists used matte paintings to add karst islands to the plates of the beach for the South Pacific setting. In these specific images, we see the before and after as Marlow looks up into the sky to watch as the damaged enemy plane plummets to the ground. Everything about the crashing plane you see in this image was created digitally, from the CG plane to the debris and smoke simulations.”

“As the two young pilots carry on their battle they find themselves at the edge of a cliff in the dense jungle. Our work on these scenes was to make the shots look like they took place in the 1940s South Pacific. Part of the plates were shot on an onset cliff built in Australia and others were shot in studio. We brought these elements together and added the digital landscape, which was provided by ILM.”

“We took ILM’s CG background and rendered it as a flat 360-degree image that we could map on a sphere, and we then added foliage, haze and smoke and tied in the background elements with the foreground, which we had dressed with additional vegetation to create a dense jungle around the fighters. The look of these scenes is really going for a golden hour glow, with the sun setting and lots of flares, giving off a very warm mood.”

In order to highlight the time period, we were tasked with making the streets of Saigon look like the 1970’s. The plates for this scene were set-dressed and our team added the neon signs.

The filmmakers ended up reshooting some of the elements on green screen. Here we used existing backgrounds and plates from the film and changed the performance of the actor with the reshoot. This involves mostly compositing work and grading to make it look seamless.

“In the wreckage of the Wanderer, an Easter egg for hard-core fans, the Iwi native tribe arranged a labyrinth of pillars covered with hieroglyphics that depict the story of Kong. As the explorers go through the passage, the pillars line up to form images telling the story of Kong that only appear when the perspective aligns just right. The hieroglyphics artwork was provided by ILM and our team mapped it onto CG pillars. Our team created the CG pillars, laying them out, creating the parallax effect, and adding ILM’s artwork, with the liberty to play with it to make it all work.”

“We designed the pillars so that in most frames the artwork looks like generic language until the angle reveals the hidden story. For this, we had to create a forced-perspective parallax effect and play around with the camera position to change the view based on the angle. The precise alignment of pillars required for each shot meant that there was no standardized CG setup. Continuity took the backseat to favour the storytelling. We treated each shot as a hero shot where we fine-tuned the CG pillars modeling, layout, and lighting, as well as the artwork projected onto them to create the sequence and to allow it to visually tell Kong’s history with the Iwi natives.”

Filmmaker Jordan Vogt-Roberts had a clear picture of a new adversarial monster that he wanted to create called a Skull Crawler that has bird-like claws and large sections of translucent skin. It needed to be an iconic design simple in nature. Iguanas, crocodiles, alligators and the stop-motion animation character Jack Skellington influenced the look. Shoulder poses were exaggerated by ILM but dialed back if the abdominal structure was not being maintained properly underneath. Stripes were added later in the production to provide some level of camouflage.

Modifications had to be made to the 3D model once fur was added as it covered up the anatomy and altered all of the key action lines. Haircraft procedural system was utilized by ILM to specify the parameters for 50 different types of hair grown in different parts of the body and required two groomers to execute.

Rather than produce an oversized gorilla which ILM originally planned for the mandate was to create a bipedal 100-foot tall monster inspired by the 1933 movie which introduced him to the world. Creative license was taken with the movement of Kong while the camera placement was kept at a human level that allowed for beautiful backlighting and aided his presence in the film.

ILM was constantly posing the big Skull Crawler with Kong to ensure that the monster felt like a worthy adversary. A lot of time was spent trying to figure out weird but not awkward movements for the snake-like creature with arms. Some Judo-like throw moves for the Skull Crawler were incorporated as well as a tail that could be used for tactical advantage.

The squid fight was one of the most difficult sequences for ILM as tentacles and suckers moving over Kong’s hair had to be simulated together along with all of the water. It took several months to execute the close-up shot of Kong chewing on a few tentacles because of the amount of interplay involved.

Massive water buffalos, spiders and squids also live on Skull Island. ILM always tried to find some real-life reference so to give the audience a sense of familiarity which in turn makes the creatures more believable. That being said cinematic attributes were added such as enormous horns that would in reality would prevent the head of a water buffalo from swinging around.

Action and visual looks were visualized extensively for The Boneyard sequence, as The Third Floor worked with the film team to represent the atmosphere and environment and block story beats. Image © Warner Bros. and courtesy of The Third Floor, Inc. The Boneyard was stark and colorless, but still had to look brooding and dangerous. In postvis shots, artists at The Third Floor worked to depict that sense of mystery in creating temp comps. Image © Warner Bros. and courtesy of The Third Floor, Inc.

Mission Critical: ‘Lightyear’s Journey to Infinity and Beyond
Putting the Fun in Dysfunction: The Non-Humanistic Therapy of ‘HouseBroken’
‘The Freak Brothers’: This is Your Humor on Drugs
The Heroic Logistics of ‘Superman & Lois’ VFX
‘Eureka!’: An Inventive Imagination Runs Wild in a Prehistoric Paradise
Bill Fagerbakke Talks Nickelodeon’s ‘The Patrick Star Show’
Re-VIEW: ‘Love, Death + Robots’ – A Visceral Pleasure
END_OF_DOCUMENT_TOKEN_TO_BE_REPLACED