Q&A: Delving Into the VFX of Miguel Ortega and Tran Ma’s ‘The Ningyo’ 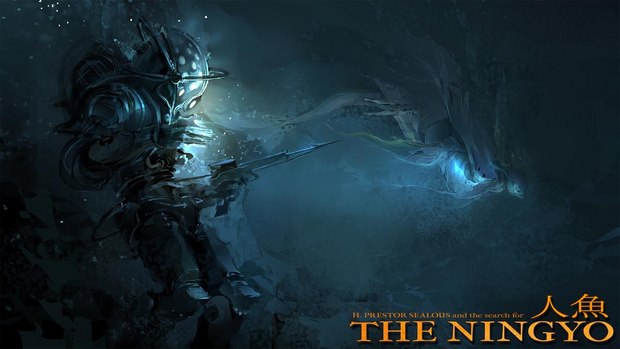 Directed by Ortega with production design by Ma, The Ningyo is a 1909 period film pilot about “cryptozoology,” or the search for mythological or unproven creatures. A Faustian tale about losing oneself in the process of achieving one’s goals, the short film was funded by a successful Kickstarter campaign that raised $81,791 from 1,025 backers.

The photoreal short film employing spectacular visual effects is the follow-up to the duo’s more stylized 2012 project, The Green Ruby Pumpkin. Derived from an old Japanese folk tale about a mermaid-like creature that will bring immortality to whoever consumes its flesh, The Ningyo was shot at Ortega and Ma's home, using physical sets built in their living room that were later augmented with CG set extensions. Ortega and Ma crafted all of the CG elements themselves using Autodesk Maya and Mudbox, with rendering completed using Chaos Group’s V-Ray.

Professor Marlowe finds a piece of a map pointing to the place where the Ningyo, a mythical Japanese creature, could be found. The legend claims whomever consumes its flesh will attain remarkable longevity. He presents the project to his peers, who mock and dismiss him as a fraud. He decides to risk everything and go after the Ningyo on his own in hopes to bring to light what could be one of the greatest contributions to science. What he could not anticipate is that, in his search, he is confronted with a choice that puts the very foundations of his morality to the test.

Check out the concept art and read AWN’s Q&A with Ortega about creating the film below:

AWN: The Ningyo appears to be a very different film than your previous collaboration with Tran Ma, The Green Ruby Pumpkin. What was the inspiration for this new story?

Miguel Ortega: The primary inspiration stems from the story of Faust. It is the “deal with the devil” myth re-imagined, centering around Professor Marlowe, an ex-hunter obsessed with finding the cryptid known as the Ningyo.

Marlowe is a composite character of Grover Krantz and Carl Akeley. Krantz was an anthropology professor at Washington State University and one of the first modern scholars to delve into the world of cryptozoology. Carl Akeley was an influential taxidermist and hunter that made notable contributions to the Field Museum of Natural History and the American Museum of Natural History. Men like Carl Akeley became conservationists and went on to start the early National Parks to protect the very animals they once hunted.

AWN: The film was originally slated for delivery in December 2013; what happened along the way to change that date and how were those things overcome? (And when will it really be ready for release?)

MO: The film is 30 minutes long with an insane number of visual effects. Technically speaking it's on a higher level than our previous film. There are more creatures and sets, and the aesthetic is photoreal as opposed to The Green Ruby Pumpkin, which was more stylized. We overestimated the amount of help we would get from others. Although we have a great crew of collaborators who jump in an out of the project, the majority of the weight is carried by Tran and myself.

AWN: How did you create the world of The Ningyo?

MO: We started with a very simple premise and it grew exponentially.

AWN: How were the creatures and “steampunk” elements designed?

MO: We didn't aim to make anything steampunk, everything is based on factual or plausible technology. We really wanted this to feel like an alternate reality as opposed to a steampunk film.

MO: The suit, for example, is based off the atmospheric suit built by the Carmagnolle brothers in 1882. The suit was revised to have more functional hands and feet by Tran Ma. The creatures were designed to look scientifically plausible. Along with Tran and I, we had an amazing team of artists such as Bryan Wynia who is a cryptozoology nut like us, Soheil Danesh who is one of our dear friends, and Yuo Tengara working on the designs.

AWN: How was the underwater sequence achieved?

MO: We used a combination of World Machine as well as Autodesk Memento to capture 3D scans of physical rock formations. I have found that doing 3D rocks is much more difficult than it appears to be. It's very easy to make crappy rocks but very hard to make them look great, and when you do make them great no one cares. Memento allowed us to use photogrammetry to capture rocks at places like Vasquez rocks and then retopologize them in [Autodesk] Maya and bring them into [Autodesk] Mudbox to finalize them. The underwater sequence also has fish, sharks, and a whale. All of these were treated as hero characters.

AWN: What did you capture live-action footage with?

MO: Our cinematographer and myself both own RED Epics. It was shot at 5K and scaled down to HD. RED is a fantastic camera and allowed us to film shots in a cavern with only a match. It was easy to key and relatively small.

AWN: How much of the trailer is live-action, and how much is CG?

MO: Most of the sets are physically built in my living room with CG extensions added after. Our only physical sets were the car scenes which were filmed in the desert and parts of the cavern shots were filmed in a real cave. Although half of those are in my living room as well with 3D scans of the small rocks we found on the side of a railroad track. They were scanned and duplicated to look like the same cave we had shot in before.

AWN: The film is insanely detailed. Please talk about the rendering, and how that was achieved.

MO: We built everything. So if you see a floor made of wood planks, they are each modeled in 3D. We believe if you build it in 3D, it will look better and light more realistically. We have 13 machines all rendering on [Chaos Group’s] V-Ray. Our house in the summer is like walking into a sauna aboard the top of an aircraft carrier. It’s hot, loud and miserable.

AWN: How did your choice of rendering technology affect the development process?

MO: Tran and I are really not technical people. We chose V-Ray as our tool years ago because we don't care how it's done or what's happening under the hood. We just want to have pretty images the most painless way possible. V-Ray is intuitive and robust. We use whatever gives us the shot in the fastest and easiest way. V-Ray gives us that power.

AWN: Aside from V-Ray for rendering, which other 3D animation tools are in use?

MO: Maya is our base package. All the models are done in Mudbox, all animation is brought into Chronosculpt to shot model and fix any deformations (it’s really an under-appreciated gem). V-Ray for rendering and Nuke for compositing. Editing is done in Premiere.

AWN: Your crowdfunding goals appear to have been exceeded, which must be gratifying. What will you and Tran Ma do with the additional funding?

MO: $80,000 for a 30-minute period film is insanity. Period film means EVERYTHING is a prop and an antique. shoes, papers, pens, newspapers. Everything is expensive since it has to look authentic. After Kickstarter fees and reward fees, it's a much smaller figure. We have been self-financing a portion of it and handling a huge majority of VFX ourselves. Like I said earlier, we really underestimated what we were setting ourselves up to do. Had we known what awaited us we most likely would never have done it. But I'm glad we did and I'm glad were almost done. Best way to do thing is to jump in the fire and figure it out.