Piecing Together the Puzzle: Bringing ‘Black Panther’ to the Screen 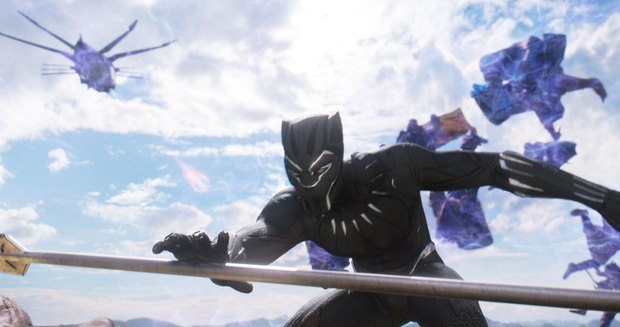 Black Panther, the most-recent smash-hit superhero success in the Marvel Cinematic Universe, was different right from the start.

“There was an understanding that this movie could be different in ways that the other MCU films have not been, just with regards to it being timely and also having the ability to touch upon real-world issues, and yet at the same time remaining a comic book film,” says Geoff Baumann, overall VFX supervisor on the movie.

Created by Jack Kirby and Stan Lee of Marvel Comics and first published in the pages of Fantastic Four #52 in 1966, Black Panther was the first black superhero in American comics, and his creators imbued him with a dignity and purpose that has made him a fan-favorite for more than 50 years.

“It’s a best-guess type of scenario, where you’re trying to predict the number of shots that may end up in a certain sequence to give you that rough number. We would put all of the sequences into groupings up on a whiteboard and then move around Post-it notes with different vendors to see how we could put the puzzle together.”
— Black Panther VFX supervisor Geoff Baumann

Bringing the character to the Marvel Cinematic Universe in a way that would satisfy fans’ expectations required Baumann and his VFX team to touch every shot in the movie -- a tally that tops out around 2,450, with 2,000 or so requiring more than just simple clean-up.

The sheer quantity of VFX shots meant managing the work well was essential to staying on schedule, on budget and maintaining a high level of quality. Baumann says VFX producer Lisa Beroud was essential to helping break down the script and match up the available studios’ capacity to deliver on quality and quantity of shots.

Early attempts to figure out how many and what kind of shots are needed were necessarily rough, Baumann says. “It’s a best-guess type of scenario, where you’re trying to predict the number of shots that may end up in a certain sequence to give you that rough number,” he observes. “We would put all of the sequences into groupings up on a whiteboard and then move around Post-it notes with different vendors to see how we could put the puzzle together.”

It also was essential to establish a good working relationship with Coogler, who had not previously directed a VFX movie on the scale of Black Panther.

“It’s the first time he’s done something of this scale with regards to visual effects, and I didn’t want that to become a burden on him and take away from the other aspects of the storytelling,” Baumann says. “The approach we took was to go through the last three or four Marvel movies and go through a bunch of how-to’s.… We’d sit there and show him before and afters, and what we shot and what we replaced, the things that worked, the methodologies that were sound and the methodologies that didn’t work.”

Breaking down the work on the film, Baumann says Industrial Light & Magic was tasked primarily with creating the landscapes of Wakanda, including the high-tech Golden City, as well as the border regions, the Hall of Kings and the dog fight for a total of just more than 400 shots.

The Golden City required a lot of buildings with detail levels varying depending on the distance to the camera. ILM approached the task with a kind of building-block mentality that allowed buildings to easily shift and move to deliver the compositions that Coogler wanted, and then to light and render it. “It’s similar to if you were in an overly complicated video game in the sense of your level of detail was dependent on your field of view and distance from a certain object,” says Baumann.

Method Studios also did about 400 shots for the film, focusing on the outdoor battle in the third act and the interiors of Shuri’s lab.

While Wakanda is a fictional country, both studios based the environments of Wakanda on real places in Africa. “We did a bunch of plate photography, stills, and motion picture and photogrammetry, and LIDAR-ing of environments to act as a base for all of the environments both ILM and Method built,” Baumann recounts. Scanline completed about 400 shots, including the Warrior Falls sequences, the heist at the British Museum and the sequences at the abandoned airfield. With Warrior Falls, the simulations got complex because the water was falling 100 meters or so before impact, meaning the time the water had to move away from a neat stream was significant.

“It was a complex set-up that required Scanline to really put some thought into the build of the environment early on,” he recalls. “I think that was a testament to optimization and in figuring out how to push through the large amount of work.”

Luma Pictures handled the casino fight and the car chase in Busan, Korea, for about 230 shots, while Double Negative came on late and did just under 80 shots for the Vibranium mine battle.

And then there were smaller vendors. Trixter did the Nigeria sequence at the start of the movie, at least in part because the studio had worked on the Black Panther character and suit in Captain America: Civil War. “They had the suits so it seemed to make sense to give Trixter that part of the film,” Baumann says.

Rise did environment work, including the Jabbari section of Wakanda and M’Baku’s throne room. Again, the environment was based on a real location, in this case the Rwenzori mountains in Uganda. Rise also worked on Shuri’s car hologram and the craft flown at the end of the film by Freeman’s character Ross, some of the work for which was completed by Ghost. And then there were a number of small studios that came up to do split comps and clean-up work, Baumann says, including capital T, Exceptional Minds and Oslo-based Storm Studios. Bringing in small vendors at the end to handle a handful of shots gives Baumann flexibility on deadline without needing to add to the workloads carried by the larger shops.

“You know to make sure that you don’t overload ILM too much, because you know you’re going to need them at the end as well,” he says. “It’s a balancing act and it continues all the way through pretty much into delivery.”

Additionally, Black Panther is one of multiple Marvel films in production at any given time, coming out just three months after Thor: Ragnarok and three months ahead of Avengers: Infinity War.

“I really have to attribute the fact that there is continuity and consistency between them all to Kevin (Feige), Lou (Esposito) and Victoria (Alonso),” says Baumann. “They do keep us all kind of in line and I think it’s one of the reasons that the franchises and the films have been successful, because there is a common thread that we feel throughout each of them.”