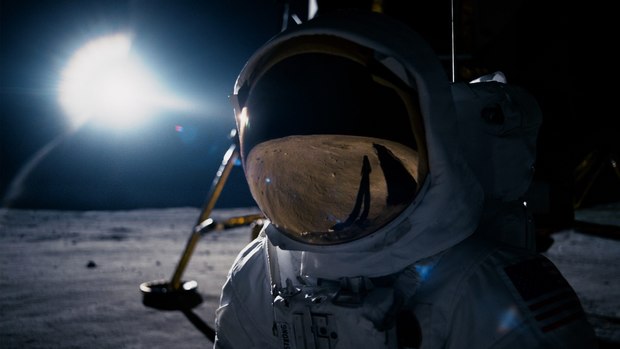 When conducting research for the cinematic adaptation of “First Man: The Life of Neil A. Armstrong” by James R. Hansen, filmmaker Damien Chazelle (Whiplash) and screenwriter Josh Singer (Spotlight) were astounded by the fragile and primitive industrial construction of the Apollo 11 capsule that historically delivered American astronauts Neil Armstrong, Buzz Aldrin and Michael Collins to the Moon. It became imperative for Chazelle that viewers become embedded as if another crew member so to emphasize the perilousness of the mission. To achieve an immersive experience, a Cinéma vérité documentary style as well as a hybrid of practical and digital techniques were utilized for the space travel and Moon landing sequences.

Production designer Nathan Crowley is no stranger when it comes to constructing life-size props and miniatures for outer space scenes, having previously received an Oscar nomination for Interstellar. Along with reading various manuals and documentation, Crowley travelled to the Kennedy Space Center in Florida to examine the Lunar Lander and Gemini capsule, and then to Houston for the Lunar Landing Training Vehicle. “It’s old-school filmmaking where you use a full-size cockpit for the foreground, miniatures for midground and CG for background,” states Crowley, whose mantra is “new technology, old techniques.” “You always start and end with something built in reality,” he notes. “In-between you use all of the different methodologies to build an immersive experience.”

In order to do the final finishes and shoot the miniatures that were initially designed in Foundry’s Modo as 3D models, Crowley hired Ian Hunter, formerly of New Deal Studios, to be part of the art department. “I was a modelmaker so am used to doing kitbashing,” says Crowley. “What’s great now with the new slicing software is you can take a big scale model, chop it up and print it overnight on 18 3D printers. We literally ran those printers 24 hours a day for six months so we would burn them out. A German company called BigRep has developed a metre-by-metre print bed so they lent us two of their machines so we could print an Apollo 11 capsule in one go.”

A steaming coal plant served as the site for the gantry and White Room in order to get the right atmosphere and horizon line for the capsule. “We had to connect those all with real locations that would immerse the audience in the event,” Crowley recounts. “This was a raw time when these people were in extreme danger and risking their lives to try to do this unknown thing. We needed to capture that.”

Six hundred and fifteen VFX shots were created for First Man, which was recently shortlisted as one of 10 films vying for a nomination in this year’s Oscar race, with DNEG serving as the main vendor. “Each sequence had different issues,” asserts Academy Award-winning VFX supervisor Paul Lambert (Blade Runner 2049), who oversaw the visual effects created for the project. “When we had interior shots of the X-15 or Gemini and Apollo capsules or Lunar Module we used an LED screen which was 35-foot tall and 60 foot across. In the X-15 we even got reflections in the eyes of Ryan Gosling which are tricky to do if that had been shot greenscreen.”

Ninety minutes of content needed to be produced for the LED screen. “Using the storyboards, we started off rendering front and side views, but what became quickly apparent was by rendering a full spherical image it would allow us to do interactive moves on the day. We would meet two hours before the setup of the shoot with Damien and everybody involved, and play through and work out exactly the cue points. Damien would then sit with the actors using that as the basis. It was run like a play.”

Archival NASA launch footage of Apollo 14 was digitally enhanced with smoke plumes on either side and cinematically reframed for when Saturn V rocket lifts off with the Apollo 11 crew. “Every Apollo launch had various engineering cameras which would be either looking at the thruster or a certain clamp,” Lambert explains. “The footage was only processed if there’s an accident or an explosion or something goes wrong. But a lot of it was on 70mm NASA film stock, which was no longer made. We spent months trying to find a way to have this material scanned or telecine. No one had the machines that could read it because the footage had different sprockets.” Fortunately, FilmLight in London had manufactured a scanner that did not use sprockets. “We sent the footage to them, they did various tests to try to get all of the colour back in the frame and what came back was fantastic.”

A sound stage and greenscreen was not a practical option for the historical Moon landing. “It’s the usual thing for me on a film where I need a quarry and giant industrial site,” Crowley remarks. “However, shooting in Atlanta, everywhere you look there are trees and hills. I asked the locations manager what I thought was a dumb question, ‘Do you have giant great quarry in Georgia?’ He said, ‘Yeah. We do.’ The quarry owners were excited and wanted to help. They sculpted five acres for us with their big machines. Tranquility Base was 500-foot by 500-foot with a full-size Lunar Module. The acreage behind that had slowly rising embankments to hide all of the trees so we could get from grey to night sky black. Paul Lambert then took those berms and put the distant stuff of the moon in.”

Two custom-made 200K SunSun lights were constructed for cinematographer Linus Sandgren (American Hustle) to produce harsh and crisp shadows on the Moon surface. “Unfortunately, one exploded after about an hour into shooting, and a few hours later the other one exploded,” reveals Lambert. “What ended up happening was we had these shots with these amazing shadows that you’ve never seen before. Afterwards we switched to the two 100K stacked together which gave us a different shadow. What we did in post was sharpen up the shadows so there wasn’t a discontinuity between the two setups.”

Complicating matters was the decision to shoot the Moon landing in IMAX. “In post we cleaned a billion footsteps because with an IMAX camera you get to see absolutely everything,” Lambert continues. “We tried our best on the day to clean-up the set and sweep different areas. There was also extension to the horizon. Also, in nearly every shot the astronauts have the sun visors on which are essentially like having a chrome ball onset. You see always see the IMAX camera and the crew. A lot of the work went into creating a digital version of the Moon to remove the IMAX camera. We did a good job of trying to keep as much of what we shot in the plate.”

Software and workflow did not need major modifications to handle the required workload. “It was more about trying to come up with the most efficient way to produce this massive amount of content,” Lambert notes. “We relied heavily on Terragen for our environments. For the full CG flying through the clouds in the X-15, Terragen worked wonders. It was all about techniques and methods to be able to produce the content in time. We had to come up with a way to replicate the content on the screen to add extensions or change things; that did take awhile to work out along with a methodology which allowed us to update backgrounds.”

Crowley had a different challenge. “I spent a lot of time trying to figure out how the LLTV worked. Then we had the Multi Axis Trainer (MAT) which is a square inside a triangle. How does that math work? Then of course I needed to know what every single button and gauge does and how everything works in order to be able to fly a Gemini, Apollo, and X-15. It was mind-boggling.” Designing the Colorful and Wacky Worlds of ‘Archibald’s Next Big Thing’
Surreal and Psychedelic: The Foo Fighters ‘Chasing Birds’ Music Video
FuseFX Goes Otherworldly on NBC’s ‘Debris’
The Sharp, Edgy Designs of ‘Kipo and the Age of Wonderbeasts’
Crafty Apes is ‘My-T-Sharp’ in ‘Coming 2 America’
Behind the Music and Animation of ‘Doug Unplugs’
Mike Rianda Talks ‘The Mitchells vs. The Machines’
Scanline VFX Tackles the Cosmic Rewind in ‘Zack Snyder’s Justice League’
END_OF_DOCUMENT_TOKEN_TO_BE_REPLACED