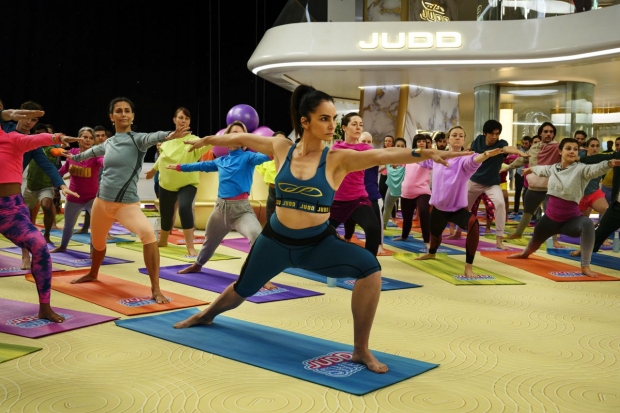 VFX studio Nviz has shared with AWN a detailed dive into their previs, VFX, postvis, and graphics work on Avenue 5, HBO’s space tourism comedy from Armando Iannucci (The Thick of It and Veep).  Set 40 years in the future, the series takes place aboard a fictional Judd Galaxy space cruise, where wealthy passengers enjoy all the luxuries, and banalities, space travel can offer.  The show features a stellar cast led by Hugh Laurie (House, Veep) and Rebecca Front (The Thick of It, Psychobitches), though it is fair to say their journey is not all plain sailing! Plus, Josh Gad steals all his scenes as Herman Judd, the amoral, indecently insufferable billionaire owner of the luxury ship. And then there’s that fateful yoga session…

The show's overall VFX supervisor, Simon Frame, previously worked with Nviz on sequences from the first season of Britannia, for which he received a BAFTA nomination. On Avenue 5, the Nviz team was led internally by VFX supervisor James Fleming and CG supervisor Sam Churchill, while the graphics were supervised by creative director Chris Lunney.

All told, Nviz delivered over 500 shots, of which 456 were used, produced over the course of 18 months. The bulk of the work was visual effects: creating the environments inside and outside the spaceship, starfield replacements, and the gravity flip sequence in Episode 1, a pivotal event in the story arc.

However, Nviz’s work on Avenue 5 began by creating previs for the gravity flip sequence, used not only to inform the director of the final look, but to aid in the live-action shoot planning. Previs was required to cover the three areas affected by the gravity shift: the atrium, which is the main area in the ship, the toy room, and the spa.

The previs was unusual in that the team used crowd simulation for the many human characters in the various areas. Previs artist Eduardo Schmidek worked in Maya, using Miarmy for the crowds, generating several iterations to find the right balance between accuracy in the gravity shift dynamics and the comedic timing.  Once the general timing was established, the team was then able to work in specific touches on hero shots. Much of the action in the show takes place in the Atrium; building this to show the scale and size of the ship was a huge challenge from a CG point of view.  On set, the production had built the ground and first floor. The Nviz team then came in to augment the environment up six stories high in CG.  The final effect is a beautiful, glistening, white towering interior.  Each story was then dressed by 2D with crowd patches and 3D digi-doubles to complete the illusion of a bustling interior metropolis. The interior was also supplemented with Judd Galaxy branding signs and logos.

The Judd Galaxy spaceship is graced with enormous viewing windows and the 2D team was also tasked with starfield replacement and window reflections for all of these.  The action on set had been shot against blackscreen and bluescreen.  “The black screens gave the advantage of allowing for more non-VFX live-action shots and saved on despill work,” Fleming said.  In addition to starfields, the view was occasionally augmented with a glimpse of Saturn (referencing NASA footage), CG meteors or a floating 3D astronaut.

The gravity flip is a major hero sequence that provides the basis for many series plotlines, as the passengers and crew suddenly realize they are stranded in space. A major engineering fault suddenly causes gravity loss, sending the ship lurching in space from side to side.  The timing adds to the comedy, as it takes place during a huge, record breaking yoga session on the ship’s atrium. The gravity flip sequence involved huge shots that integrated hundreds of elements.   The work was a combination of a heavy 2D approach using elements that had been shot on set by Frame, including stunt performers being pulled from side to side; this was augmented with a barrage of CG elements, including digi-doubles, yoga balls, yoga mats, massage stones, toys, cutlery, and even a flying piano.  “We supplemented the scene with as much CG as we could get away with, the brief was to try to fully sell the sense of chaos and destruction,” Churchill explained.  Added Fleming, “Every live-action person in that scene had to be rotoscoped, cut out and put carefully into every frame, then digi-doubles inserted for the action the stunt doubles couldn’t achieve. It was quite an undertaking.”

In addition to the wide hero and establishing shots, the sequence also cut in closer, including some comedy shots where piles of brightly dressed yoga enthusiasts are squashed up against the spaceship windows. CG props were added to most (if not all) of these shots to emphasize the gravity direction. Food, yoga balls and mats were added to transform relatively static shots into far more dynamic ones and again drill home the gravity shift and the resulting chaos.

While the chaos is unfolding on the Atrium, the sequence cuts to the control room, where second engineer, Billie (Lenora Chrichlow), is trying to find and fix the problem. In these shots the audience is given another opportunity to appreciate the scale of the spaceship and its surroundings.  The live-action control room was essentially shot on set as a box, with the interior visible through the large window.  The Nviz team augmented this plate to build in the huge exterior of the ship around it, including animation and rendering of a CG spacesuit that the captain was using. Working on Avenue 5 was never anything other than interesting, presenting the team with the kind of work they don’t usually see.  One sequence involves an “asteroid belt” of excrement that has accidentally been ejected and gradually surrounds the ship.  The Nviz team was given the original element that they then used to create up to 50 shots, with the elements comped over multiple layers and angles, gradually increasing along with the developing storyline.

Later in the series, mayhem ensues after the passengers discover that the crew are actors and jump to the conclusion that they are not actually in space at all, but in a reality TV show. Determined to prove this they attempt to leave via the Airlock to disastrous results.  Nviz was required to create the effect of the unfortunate passengers being instantly frozen once the airlock is breached.  Multiple witness cameras were rigged, and the actors “froze” into their final positions on set.  Fleming was present on set to oversee the process and this reference was then passed to a photogrammetry team, who scanned the performers.  The Nviz team had to decide whether to scan the performers in their final position on set or in a T-pose that they would try to rig into position afterwards.  Scanning the correct pose was always going to be the way to achieve the highest quality scan; however, there would only be one chance to scan and if the poses were even a fraction out, they could create additional problems. The team opted for the latter, and thanks to careful planning, all the poses were captured accurately. The process then was to add the scan into the plate and match as closely as possible to the live-action performers.  The differences in lighting, the balancing of textures and a handful of scan issues were dealt with before the team were able to begin to add the frost effect.

As usual, comedy touches were added, such as a frozen eye-popping effect and shattering hands.  Said Churchill, “The airlock sequence was such a fun sequence, with so much going on.  The second I heard about it, I wanted it!”  The fun didn’t stop there as the unfortunate frozen passengers float out into space and end up hitting the windscreen of a spaceship from Mission Control, like bugs on a highway. In addition to all the action taking place in space, Nviz also created the earth establisher shots for Judd Galaxy Mission Control.  The basis for these shots were filmed at the famous McLaren head office.  The team then got busy painting out the McLaren cars from the plate and augmenting the office with Judd branding signs, CG rocket ships and towers.

Another major part of the project was the on-board graphics seen across the ship. In all, Nviz worked on 400 graphics shots, with 144 different setups.  Lunney’s team both developed on-set designs for post-production and then worked closely with the project’s production designer, Simon Bowles, to create new designs.  The graphics ranged from the many advertisements and welcome screens around the ship, heads up displays for the bridge and spacesuits, to tablets, phones and engine room and communication screens on board ship and earth.

The initial plan for graphics was mainly to create humorous visuals for the many welcome and advertising screens populating Avenue 5 that are overwhelming the captive audience with incessant advertisements for Judd products. These were to be interspersed with cuts to the ship’s Head of Communications, Matt Spencer ad-libbing to camera, to elaborate story points with subject-related advertisements. However, as the editorial process progressed, the graphics began to evolve to subliminally further tell or reinforce story points, while also adding an extra layer of humor supporting or contradicting the storyline the characters were presenting.  Nviz found themselves taking quite an active part in this process, and while the gags were carefully briefed at the start of the process, eventually, the Nviz team was contributing their own ideas, many of which made it into the show. A final notable sequence takes place as Avenue 5 drifts through space and the crew decide to create a flight simulation tool for Captain Clark to learn how to dock the massive ship, as the controls can only be activated by his hands.  The simulation sequences were created through a combined effort from Nviz’s 3D and graphics departments.  The design, which was briefed to look like an early noughties computer game, was created to seem incredibly complicated, with Clark’s first attempt resulting in 2,000 virtual casualties!  The team built the entire simulator, including the space dock, Avenue 5, and a fleet of shuttles, much of which then had to be destroyed for the various simulations.  The animation build and dynamics simulation were generated in Maya and then baked out and brought into Unreal Engine.

Working on the Avenue 5 series was a huge rollercoaster for the Nviz team, who created some of the most hilarious effects the crew has ever produced.

Taking an Old-School VFX Approach in ‘All Quiet on the Western Front’
‘Natural Habitat Shorts’: Like ‘Ranger Rick,’ But for Adults
Framestore Sets Sail on ‘1899’ with New Virtual Production Tools
Animated Characters: The Art of Babbitt – Part 1
Bruce Smith and Ralph Farquhar Talk ‘The Proud Family: Louder and Prouder’ Season 2
VFX is the ‘Thing’ for Tom Turnbull on Tim Burton’s ‘Wednesday’
We Need to Chat
F is for Flake: The (Not So) Great Animation Robbery?
END_OF_DOCUMENT_TOKEN_TO_BE_REPLACED