Led by VFX supervisor Luke DiTomasso, the studio delivers over 200 shots for director Mike Cahill’s sci-fi thriller about two overlapping worlds, one real, one not, one ugly, one beautiful, and the conspiracy to keep people from finding out the truth. 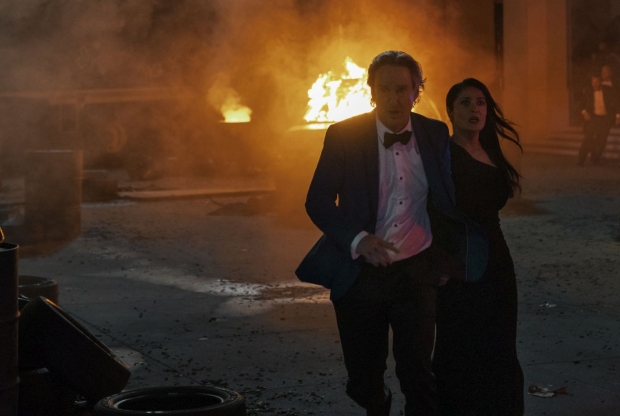 In Prime Video’s sci-fi thriller, Bliss, Greg, a recently divorced man whose life is falling apart, meets the enchanting Isabel, a woman who lives on the streets and is convinced that the polluted, broken world around them is not real. She believes they are living in an ugly, harsh world simulation inside of the beautiful, peaceful “real" world of bliss.  Doubtful at first, Greg eventually discovers there may be some truth to Isabel’s wild conspiracy theory. Written and directed by Mike Cahill, the film stars Salma Hayek as Isabel and Owen Wilson as Greg.

Molecule VFX, led by Luke DiTomasso, worked closely with Cahill to create the film’s two realities. The studio, based in New York and Los Angeles, has been providing VFX services for both film and episodic, from pre-production through post, since 2005. On Bliss, they delivered more than 200 VFX shots, many involving intricate visual effects elements, such as creating holographic people, smashing vans, and blending two opposite realities together.

In planning the work, the Molecule team of 36 artists relied upon references from VFX supervisor Michael Glen, especially where there was a real-world example to emulate. “We looked at lots of images of brains, especially suspended in liquid, for the brain box supercomputer,” DiTomasso says. “Other effects, like the telepresence, required more exploration. It was supposed to look interesting to us, but an everyday mundane tool in their society, like smart phones are to us.”

“When Cahill described that the entities should feel like something taking up physical space, we recognized the need to avoid the typical look of a hologram broadcast, like Princess Leia,” he continues. “Instead, the holograms would take on prismatic light bending properties. This would also mean that the ghosts would take on the lighting as well as the shadows of the world around them.”

DiTomasso arrived at a look that was not entirely additive, where the holograms would emit chromatic aberrations and distortions of their own, like looking at refractions inside a jewel. “Achieving this look required many hours of rooting of the target person to be ‘ghosted,’ then painting the background and sometimes people behind them,” he explains. “We made extensive usage of Mocha tracking and sometimes Camera Tracking in Nuke and Syntheyes for all the painted clean plates to be accurately occupying the space behind the ghosts.” The Van crushing sequence proved the most technically challenging. “There were lots of moving parts and hand-offs within the CG department,” DiTomasso notes. “Renders were a bit of a bear, so revisions were not super quick. But ultimately, we knew what we were going for, so it was basically a straight line to get there, albeit slow and tricky.”

“Creatively, World Blending was the most challenging, because we needed to create the look, which evolved over time,” he adds. “The approach was based on it being an invasion of reality. It started with the ghost effect and then transitioning into solid objects. As our two heroes run through chaos, the objects and people now becoming ‘real’ would pose a danger of colliding into them. In order to get the timing right, we tested out variations of speed and cadence for the objects appearing; we arrived at the concept of making it look like he was running through a membrane from his world into this world. Due to the many moving parts, including 50 grouped objects animated at various speeds, they all required precise timing and painted clean plates for all. This was by far the most complex scene to work on, but it was a lot of fun.”

The project’s most innovative new technology involved enabling DiTommaso’s team to work remotely over a secure platform. “We had already been investigating and testing various remote workflows in an attempt to find a secure solution we could extend to artists who weren’t readily available to join us in house,” the VFX supervisor describes. “Once we realized this would be a necessity for everyone in the company, we accelerated our plans. In the weeks before the lockdown, we had increasingly larger groups of artists work from home to gradually stress-test the system. We looked through a few companies offering full remote working suites via Teradici PCoIP setups and ultimately decided to configure our own images and administer them to our users ourselves. This route gives us the most flexibility and allows us to accurately and effectively mirror our required security standards.”

The team uses Teradici to give artists access to dedicated, powerful, and secure CoreWave machines to access and work with files on Molecule servers. According to DiTomasso, they have this setup in place for Nuke, Maya, Houdini, Mocha, Syntheyes, Krita, Resolve, Mari, and Substance Painter. “We spin up the CW instances in the morning and then down again after the workday is over,” he says. “It allows us to scale as necessary and limits the amount of technical troubleshooting and support we might have to do otherwise. We have our own internal workflow tools built into the workflow just as we did when artists were at our office. It’s been relatively seamless.”

Reflecting on the project, DiTomasso shares that overall, the review sessions with the director were the most satisfying part of the work. “Mike was so specific about what he wanted, and at the same time empowered us to present him with good ideas,” he concludes. “When we nailed a shot or a sequence, he was so enthusiastic and grateful that he would shower the team with praise and gratitude. It is rare for us to have such an intimate relationship with a director who valued our work so overtly. We all felt really comfortable and accomplished working for him.”