VFX supervisor Nico Del Giudice walks through the studio’s background replacements and greening, as well as surgical gore replacement work, on the Peacock crime drama, based on the podcast of the same name, inspired by the true story of Dr. Christopher Duntsch and his reign of deadly surgical malpractice. 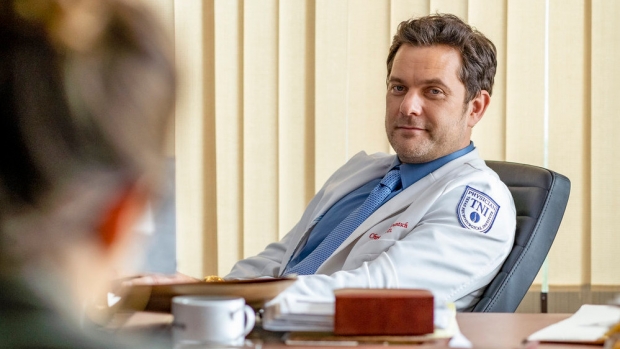 Molecule VFX has shared with AWN some of their VFX work on the Peacock crime drama mini-series, Dr. Death. Based on the podcast of the same name, Dr. Death is inspired by the true story of Dr. Christopher Duntsch (Joshua Jackson), a rising star in the Dallas medical community whose flourishing neurosurgery practice began to crater as patients who entered his operating room for complex but routine spinal surgeries left either permanently maimed or dead. Two fellow physicians, neurosurgeon Robert Henderson (Alec Baldwin) and vascular surgeon Randall Kirby (Christian Slater), as well as Dallas prosecutor Michelle Shughart (AnnaSophia Robb), were instrumental in bringing Duntsch to justice.

VFX Supervisor Nico Del Giudice and his team worked closely with the show’s production crew to ensure the visual effects blended seamlessly and invisibly with the live-action. Del Giudice’s role on the series was to assist the creative vision of showrunner Patrick Macmanus through VFX without distracting attention from the story. “I originally met Patrick on Happy, a show that really emphasized noticing the VFX throughout the many fantasy sequences and CG characters,” he says. “After Happy finished, I heard that Patrick was writing Dr. Death, a series based on true events and the reality of Christopher Duntsch. It was exciting to hear that Dr. Death would be fundamentally based on realism. I was very fortunate to start with the show in pre-production just before the pandemic and have followed the journey through to completion in post. Molecule VFX worked on many location enhancement scenes due to the confines of the seasons we shot through, as well as prosthetic cleanups and blood enhancement.”

To recreate the gore and emphasize the horror of surgeries and other aspects of the show, Molecule was tasked with producing visual effects in a manner that showed audiences the menacing threat posed by Dr. Duntsch, aka Dr. Death. The main gore-related work came in Episode 103 with the character of Elaine Johnson. According to Del Giudice, “There’s a scene where Dr. Kirby is explaining to a bedridden Elaine what happened to her during her horribly failed surgery with Christopher Duntsch. There was a gory prosthetic on her neck that needed a fair amount of enhancement for it to be convincing. Our compositing team, led by Robert Cribbett, enhanced the lacerations and gore around the wound to help sell the gruesomely failed surgery.”

“The majority of our work was a large amount of set extensions and greening that needed to be done due to the time of year we shot around the pandemic,” he adds. “A key sequence was when production shot the Texas Neurosurgical Institute location in desertous New Mexico but needed it to look like green Texas in July.”

Numerous shots needed full background replacement, with CG greening and matte paintings. Due to the scope of the area the team needed to cover, using a full greenscreen setup would have limited production time on the day, so roto was used instead.

“Creatively, we needed to turn a desolate amount of land into an endless Dallas suburban sprawl,” Del Giudice explains. “One challenge was ensuring that we used the same CG setup for continuity purposes, as this work was to be spread throughout multiple episodes. The turnaround for this work was extremely fast as well, with some shots needed within a couple weeks, so we had to limit the amount of building from scratch.”

The work involved a massive amount of CG, led by CG Supervisor CJ Chun, with procedural or repeatable assets and techniques. An early bird’s-eye view draw-up plotted out the directions and placement for each matte painting card as well as a spatial reference for where the CG shrubs and trees were to be placed.

A base CG layout was then set up for grass, shrubs, and trees. Cameras were placed within the same master layout, and then shots were tweaked on an individual basis toward the final. “On the compositing side, we had to ensure that we were using the same color grading process on all CG between many compositors,” Del Giudice notes. “It’s a challenge coordinating a massive team of artists to achieve the same look and quality and we couldn’t have done it without the help of VFX producer Michael Fernandes.”

For Molecule, the most challenging aspect of the project was producing a considerable volume of work in a relatively short timeframe. “We delivered eight episodes between April and June,” Del Giudice reveals. “When working on a passion project, you become so focused on making the best-looking product possible and it comes down to time and resources. In preparation, Molecule really focused on our cloud services, remote workstations, and renderfarms to efficiently blast through 4k renders and take many CG shots to completion.”

For Del Giudice, the project was particularly rewarding because it allowed Molecule to work with Macmanus again on “deeply written content” based on true events and reality. “It’s a great challenge working on VFX that helps tell the story without distracting from it,” he shares. “If the audience can watch the many set extensions and greening scenes without ever noticing we worked on them, then I think that would be a successful feat.”