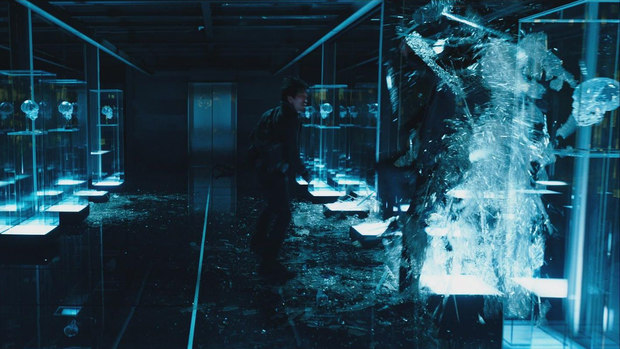 There’s truly nothing like the sound of breaking glass. Or being on the wrong end of a sleek, expertly wielded Samurai sword. Or shooting motorcycle-riding assassins from atop a galloping horse. And with Keanu Reeves once again careening from one thrashing to the next in Lionsgate’s non-stop, action-packed, neo-noir thriller, John Wick: Chapter 3 – Parabellum, you’ll get your joyous fill of all three… and then some!

Over a six-month period, Method Studios, teaming up again with director Chad Stahelski, took on around 400 primarily invisible VFX shots; their crew of 140 artists was led by VFX supervisor Glenn Melenhorst, who worked closely with production VFX supervisor Rob Nederhorst on a host of complex action sequences that unfold at breakneck speed.

“This film carries the distinct John Wick look throughout most action scenes in how the muzzle flashes, blood spatter, bullet holes, clothing squibs and such are stylized, and we drew from that established visual language for our work,” Melenhorst explains. “Having previously established Chad’s aesthetic for those elements, we were able to focus our attention on tackling challenges inherent to working with a complex environment made largely out of glass. We had a lot of fun on this project and loved collaborating with Rob.”

To keep the visuals authentic and grounded, a small amount of practical glass was used on set when safe, including a sequence in which Wick faces down would-be assassins in a corporate high rise. Augmenting plate footage shot on location, Method digitally inserted an extended New York skyline, which is composited into many layers of practical reflections; removed crew reflections; and added digital doubles to blend shots or for more dangerous maneuvers. The team also completed a considerable amount of shattering CG glass, which was fundamental to the glass office block sequence and also key to achieving Wick’s intimate knife fight in a narrow hallway lined with weapons cases.

“For safety reasons, the cabinet glass and knife throwing scene were done in CG, though production wanted to maintain a high level of tension. Choreographing the knife-throwing sequence was surprisingly involved and required a lot of planning; we had to figure out where the knife would land and also determine which panes of glass to break and how,” Melenhorst reveals.

Method also helped create a fully CG New York alley, and the urban chase sequence, during which Wick races down a traffic-lined bridge on horseback while being pursued by a gang of sword-wielding motorcyclists. While Melenhorst and his Method team are known for awarding-winning CG horse work, their efforts for this sequence focused on removing safety rigging and protective barriers used to film a practical horse as well as adding CG motorbikes and riders, and CG vehicles.

The biggest challenge, according to Melenhorst, was "creating the shot in which John Wick tumbles down the alleyway toward the end of the movie. The alley was full CG with everything built from scratch; only the stunt double was practical, and even then, we took him over as a digital double in some parts of the shot.”

John Wick Chapter 3 – Parabellum is available now on 4K, Blu-ray, DVD and Digital. You can find more information at https://www.johnwick.movie/.

Click here to see Method's complete 50-image before / after VFX image gallery (a few more examples below) on VFXWorld!

How Animation Connects ‘Luck’s Voice Actors to Family
How ‘Luck’ Applies a ‘Less is More’ Approach to Comedy
Z is for Zagreb: The Animafest Zagreb Exhbition 1972-2022
Dude! - ‘Rise of the Teenage Mutant Ninja Turtles: The Movie’ Arrives
‘Super Giant Robot Brothers’: A Milestone in Virtual Animation Production
‘Luck’ Aims to Bring Hope to Kids In and Out of Foster Care
Pre, Tech, and Post: The Many ‘Vizings’ of ‘Chip ‘n Dale: Rescue Rangers’
END_OF_DOCUMENT_TOKEN_TO_BE_REPLACED