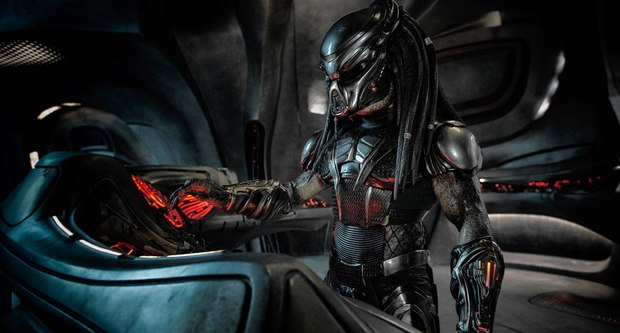 Atomic Fiction, known as Method Studios since being acquired this past July, dug back into cinematic history to help guide their artists’ design work on director Shane Black’s sci-fi action adventure, The Predator.

Working from provided concept art, Method artists designed, modeled and animated the film’s two main alien aircraft: the Arc ship cargo vessel and the Pursuit ship, built for speed and agility. The ships’ movements were grounded in physics, with creative variations to support the director’s vision. Design elements from the original feature also informed The Predator holograms and UIs. Artists began with a point cloud aesthetic, then pulled in significant text, fonts and features from the 1987 film, creating militaristic yet ergonomic designs that would appear too complex for human understanding.

While the Predator character was shot practically, its superhuman and invisible-camouflaging abilities were achieved digitally. Method artists augmented the Predator performance, inserting a digital double as needed for complex movements that required keyframe animation. VFX supervisor Ruslan Borysov led the project for Method, along with creative director and Atomic Fiction co-founder Ryan Tudhope.

“There was much discussion about how to convey the Predator’s invisibility and how visible he should be at certain moments,” Borysov explained. “After extensive creative research and collaboration, we came up with a sleek design that was dependent on his velocity; he becomes more visible the faster he accelerates, then is invisible when still. The look of the Predator’s invisibility is iconic, so we aimed to add contemporary features but maintain the refraction of the original.”

The Pursuit ship’s force field effect echoes the Predator’s look of invisibility, which Method developed after comprehensive design R&D. Using a hexagonal pattern as the base, artists then applied precise shading patterned on the look of bismuth crystals. The concept artist team worked closely with FX and lighting leads to fine tune the look. According to Borysov, “The crystals served as one of our main references in designing the force field effect. The sharp lines help indicate advanced technology but at the same time the substance is still organic with imperfections and rich iridescent refraction.”

To help streamline the creation of the Arc ship’s crash landing, the team first animated the ship’s movement across the full sequence, rather than following a traditional shot-by-shot approach. Establishing this motion baseline gave artists helpful reference for maintaining a consistent animation trajectory. Method also built an expansive 50 square-kilometer full CG environment populated with rivers, mountains and forests to provide the filmmakers with extensive creative freedom to set and change camera movement, location and framing. While most of the shots were all CG, artists were careful to match plates where practical photography was provided.

Employing randomized and procedural tactics, artists populated the sequence with photoreal foliage and developed a pipeline for those assets to interact with the ship as it plowed into the ground, seamlessly blending with in-camera footage.

“Ultimately, VFX is a storytelling tool and our aim for The Predator was to make the practical and rendered environments and elements match perfectly so that viewers are immersed in the story, regardless of how the action escalates,” Borysov noted. “We have a lot of Predator fans on our team so working on this project was quite special and great fun.”

Choc Chip Animation Riffs on Pop Culture in ‘The Art of Murder’
F is for Flake: The (Not So) Great Animation Robbery?
Re-VIEW: ‘Avatar: The Way of Water’ – A Miraculous Vision
‘Kung Fu Panda: The Dragon Knight’ Celebrates a Special Lunar New Year
END_OF_DOCUMENT_TOKEN_TO_BE_REPLACED