Merman is in the Details: Mr. X Dives into ‘The Shape of Water’ 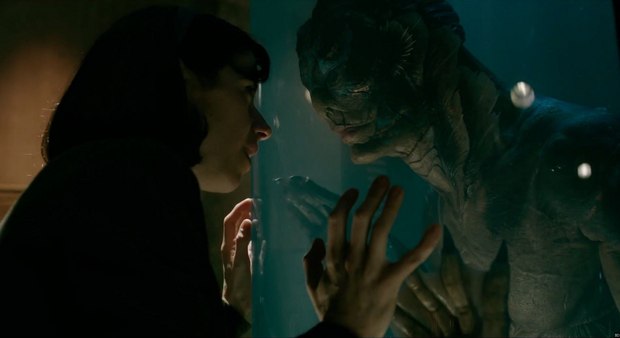 ‘The Shape of Water’ © 2017. All images courtesy of Fox Searchlight.

Other films have toyed with the idea of a romance between a human and an alien/fantasy creature, but none have explored that concept as deeply as director Guillermo del Toro in his latest film, The Shape of Water.

Written by del Toro and Vanessa Taylor, the film is delightfully difficult to categorize. The website Rotten Tomatoes, which shows an aggregated approval rating of 96% from film critics, calls it a drama, science fiction and fantasy, and romance. It stars Sally Hawkin as a mute janitor who cleans a research facility. Doug Jones plays the role of a merman called the “Asset,” a mute humanoid amphibian taken from the Amazon (where he had been worshiped as a god) and transported to the research lab. There, nefarious scientists want to take him apart to examine him.

The Shape of Water received a Golden Lion and three other awards at the Venice Film Festival during its premiere in late August, and picked up another five wins and 32 award nominations as it moved toward a limited release in the United States in December. We will likely see it listed in several Oscar races.

LA Times film critic Kenneth Turen waxes lyrical about the film calling it “Magical, thrilling, and romantic to the core, a sensual and fantastical fairy tale with moral overtones, it’s a film that plays by all the rules and none of them, going its own way with fierce abandon. More than that, Shape of Water is both grounded in the fertile soil of genre filmmaking and elevated to unexpected heights by the transcendent imagination of director and co-writer Guillermo del Toro.”

Helping del Toro realize his vision were 150 visual effects artists at Mr. X in Toronto supervised by Dennis Berardi. They helped create an idealized version of Baltimore during the cold war of 1960. And, most importantly, helped make a fantasy creature believable.

“We were working with Guillermo on Crimson Peak, when he sent me the script,” Bernardi says. “I was totally blown away. We had a leading man who is amphibian and had to act with a range of emotions including tenderness, love, anger, fear. I thought, ‘How would we do this?’ The character was Doug Jones in a suit. But what that doesn’t convey is that anytime you see him in a suit he has been augmented with a digital face based on Jones’ face. And basically anytime he’s under water, he’s digital.” But You Have Me

Work on the film began in late March, 2016 with filming taking place in Hamilton, Ontario (near Toronto) from August 15 to November 6 that year. Forty weeks of postproduction followed. All told, Mr. X artists crafted approximately 600 shots for The Shape of Water. They also worked with del Toro early in the project on design and previsualization for some key sequences, and with preparation for the shoot.

“It was probably the best ongoing collaboration I’ve had with a director,” Berardi says. “I had enough creative input and enough structure from Guillermo that I felt like he set us up to succeed. He said, ‘You might not have a big budget, but you have me. Just call, text, and I’ll be right over.’”

“The energy he brought to the project was infectious,” Berardi adds. “And it rippled all the way through -- to the look-dev artists, the TDs, the animators, the compositors. He was an ideal person to work for. He’d give us a detailed brief and then let us get on with it. And he gave us time. If we needed input, he’d be here within a day, pop in, come up, and have a look whether it was a desk-side review or a more formal daily screening.”

Artists at Legacy designed Jones’ amphibian suit with some involvement from Mr. X artists who would enhance facial expressions seen through Jones’ rubber mask and perform the character when under water.

“We kept all the performance we could with Doug,” Berardi says. “But he had about an inch of rubber on his face, so the micro-expressions didn’t come through. We would do these eye blinks and expressive gestures through the brow area. And in some scenes, we replaced the whole face and did full digital close-ups of the Asset acting that we’re very proud of. We took over when there was something impossible for Doug to do.”

Blink of an Eye

del Toro devised the term micro-expressions to describe the subtle movements on a face -- the eye blinks and brow raises, a little curl of the mouth, a nose wrinkle, forehead lines that imply emotions. To add those expressions to Jones’s masked performance, the Mr. X crew did facial capture sessions of the unmasked Jones on set in a tent off to the side using the studio’s 60-camera rig.

They also scanned him wearing the full suit and mask. As a result, they could map the expressions from Jones’s bare face onto the digital Asset’s face.

“We would match-move Doug’s head with our digital Asset over his face,” Barardi says. “Then we’d add a nictitating membrane that wiped his eye. A blink here and there. Maybe something with the nose. And so forth. Every shot had an inventory ‘to-do’ list that Guillermo drove. It offered clarity, but also gave us room to be creative.”

del Toro’s attention to detail in postproduction extended all the way to the animation controls and the casting of animators.

“He wanted to approve our facial animation rig to be sure the controls would give him enough range of motion,” Berardi says.

The crew would first show del Toro facial captures of Jones taken when he wasn’t wearing the mask so he could see Jones’s natural range of emotion -- happy, sad, fearful, tender, and so forth.

“Then, we showed him how we could map those expressions onto the full digital Asset,” Berardi says. “He made notes like, “I need the brows higher, eyes dilated.’ He would refer to the controllers the animators were using -- he spoke our language. And, he got to know our animators, as well. So, he helped with internal casting -- which animators to do which shots. Some did faces. Some did full bodies. I had never had a director with that level of input before. I welcomed it.”

Augmenting the mask with micro-expressions wasn’t enough in some scenes and for those, the team replaced the Asset’s entire head. This became necessary for a torture scene during which Jones’s pain and anguish did not come through the mask. And in another scene requiring a digital head, we see the Asset in incompatible water struggling to breathe. Every Breath He Takes

“Guillermo did ask Doug jokingly if he could try and get water coming through his neck,” Berardi says, “but we knew we’d need to replace him, which we did sparingly. We had a digital head for the entire scene because we have to see him breathing and sucking water through his gills again and again as he gets better. It was one of the hardest scenes for us in the movie. The water simulation -- getting the digital water into his gills -- was very challenging. But, I think that’s why the work is getting attention. We went for absolute suspension of disbelief.”

In one sequence that has the Asset upright in a capsule, the visual effects crew did old school dry for wet to make it look as if Jones was in water. But when he’s inside the capsule and first rolled into the lab, the water sloshing around and the Asset are digital. Similarly, in other scenes with the Asset in water, both are digital.

“Anytime we have a digital version of the Asset in digital water, the scenes represent our hardest work,” Berardi says. “We have a creature interacting with the water and the surface sloshing around. It’s complex and the turnaround time is slow. And we have a director who loves to choreograph the action of everything including simulations.”

For simulations, Mr. X used Houdini, and rendered the shots with Mantra, both from Side Effects Software, and both augmented with the studio’s custom tools. The crew would first get del Toro’s approval on the Asset’s performance. Then, they’d run the fluid simulation and the digital water would interact in physically accurate ways with the Asset’s movement. Then, del Toro would view the shots. “We were in a loop of iterations with Guillermo,” Berardi says. “If he changed the performance of the creature, as he rightfully could and should do, it would put us back to first principles on the fluid simulation again. We had a few long weeks working seven days a week with 15,000 cores rendering and processors in the clouds as well. We could hardly render fast enough. Hours and hours per frame. We barely made it for the Venice Film Festival -- we finished just hours before Guillermo got on the plane. But, I’m glad in the end we chose to render everything full resolution -- no proxies, no up-resing.”

To create the Asset’s performance, animators referenced Olympic swimmers and aquatic animals such as seals, otters, and dolphins to give the Asset a strong, graceful movement.

“We always needed to walk Guillermo through the process we were using in terms of the reference,” Berardi says. “We couldn’t show him preliminary animation without showing him the reference. He’s ask, ‘What’s your inspiration?”

For one scene, del Toro choreographed the movement of the Asset to be in sync with the currents of the water and the sound track. Sally Hawkin’s character is in the water for this scene, as well.

“We filmed a stunt double on wires and replaced her face with Sally’s,” Berardi says. “When she’s in the water, her hair is also all digital. So, we had the Asset’s full body animation, the water, her hair simulation, and all that needed to be in sync with the cadence and tempo of the sound track.”

Throughout the film, in addition to facial expressions and body movements, the Asset expresses emotion through bioluminescence. For this, the visual effects artists match-moved the digital version of the Asset over the footage of Doug Jones in the suit and then compositors layered in a shimmery effect and completed the animation in the Foundry’s Nuke.

“We created the effect in Houdini, referencing real creatures like cuttlefish and octopi,” Berardi says. “It’s a lighting effect, but we drove the performance procedurally through Houdini. Guillermo was careful about the speed of flickering and shimmering.” A Work of Art

The result is a magical, romantic fantasy. One that, it’s easy to believe, only Guillermo del Toro could have imagined and created.

“We were dealing with a real artist,” Berardi adds. “A lot of times we’re more of a paint by number team. By the time a project gets to us, we’re really matching stuff that’s already been fully worked out. But, this is a guy who does the final paint touches on a creature’s makeup himself on set. Who, if we needed a blood splatter on the floor, would get liquid and splat it out. We’d be in dailies and he’d pull out his marker and draw what he was thinking. Then he’d rip out the page and give it to us, and it was a work of art.”

“Guillermo told me from the beginning that this was a passion project,” Berardi says. “He crafted every scene, every shot. Even a wire removal. He looked at everything. It was inspiring to me as an artist.”

An Interview with Priit Pärn
‘Baymax!’ Provides an Rx for Humor and Compassion
How Digital Domain Brought Photoreal Characters to Life in ‘The Quarry’
SCAD GamingFest: Building Shared Story Experiences with Diverse Character Design
Mission Critical: ‘Lightyear’s Journey to Infinity and Beyond
Putting the Fun in Dysfunction: The Non-Humanistic Therapy of ‘HouseBroken’
‘The Freak Brothers’: This is Your Humor on Drugs
END_OF_DOCUMENT_TOKEN_TO_BE_REPLACED