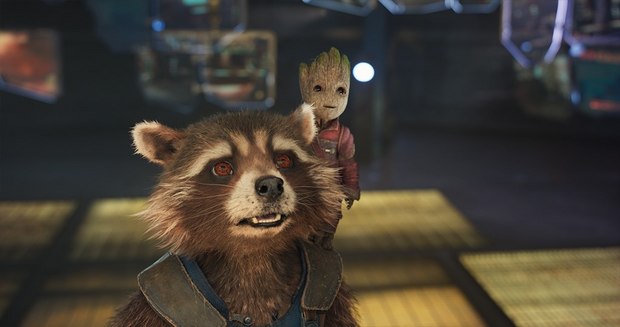 At the Turin, Italy-based 2017 VIEW Conference, AWN had a chance to sit down with Christopher Townsend, overall visual effects supervisor for Guardians of the Galaxy Vol. 2, where he spoke about the myriad challenges in creating the project’s numerous characters, environments and animation, doing so across many effects vendors, all while remaining endemic to the recently established Marvel Studios aesthetic. James Gunn’s sequel to his wildly popular first Guardians of the Galaxy film, Vol. 2 featured a host of both new and familiar characters in otherworldly realms. Working with Gunn on the sequel, Townsend noted his typical approach when beginning any visual effects project. “I’ve got to get inside the director’s head, and I’ve got to figure out what it is that the director wants,” he notes. “My job is to try and get that on the screen, and I work very closely with all other departments: with the production designer, with the DP, with the set designers, with costume, with hair, with makeup.”

With his attention focused solely on visual elements, often created from scratch, Townsend said that on Guardians Vol. 2, his fourth Marvel Studios film, he aimed to institute a visual benchmark to which the entire production adhered. “My job is to make sure that everything looks right, everything is consistent, everything is of the same standard,” he relates, noting that the amount of effects vendors on the film was fewer than usual. “On this film, we worked with...eight main vendors throughout the world. There were still 2,301 visual effects shots in the film; my job is to make sure that all those companies are working at a particular level, and giving us back what we need, and ultimately making sure that we satisfy the director’s vision.”

Given that, per the screenplay, very little of Guardians Vol. 2’s plot occurs on Earth, during pre-production Townsend questioned how and where critical character and setting elements would be shot during principal photography. “I think, environmentally, we realized from the outset that it was going to be a huge challenge,” he says. “We were going to be relying on visual effects to come up with ways to portray these worlds. It was the challenge of what you build and how much of it do you build, and, ‘How far do you extend?’”

Another pre-production challenge beset Townsend that likely confronts all filmmakers who undertake sequels. “We’re based on characters that we’ve already established in the first film,” Townsend explains, chiefly Rocket and Groot -- this time, presented as Baby Groot. “How do you make things better? Trying to figure out how you up the game and make something look more real -- and where do you take things?” In point, Townsend noted how Framestore redesigned the character of Rocket from the ground up for Vol. 2, and four separate companies animated him: Framestore, Weta, Trixter, and Method. “The challenge was to create a singular performance amongst the four vendors with about 100 different animators, and keep it consistent,” Townsend says. “We shared whatever we could and constantly compared shots to maintain just one Rocket. Splitting character work is really very challenging because obviously everyone has to try and maintain the same look.”

In bringing Rocket to life, Townsend and his four effects studios had additional obstacles in creating one streamlined performance for the character. “Bradley Cooper was the voice,” Townsend says, but he noted other contributors. “Sean Gunn, who is James Gunn’s brother, would play Rocket on set -- he would crouch down and [do] the performance, and then James Gunn himself has specifics about how he wants the character to act. So you effectively had the intent of three humans that give you that single performance. Then you spread that over four companies.”

Gunn was instrumental in determining Rocket’s final performance. “James knew and understood these characters incredibly well, and as a consequence, he was able to give direction which was very specific from an animation and from a performance point of view,” Townsend says. “He treated these characters like they were real actors, and if he felt that somebody was coming out of character, then he would say, ‘It’s not necessarily bad animation; it’s just, that isn’t how Rocket would act, or that’s not how Baby Groot would react to that moment.’ Then, it was a matter of how to communicate that to the individual visual effects companies.”

For Townsend, one special aspect to working on this project was its inclusion in the overall Marvel Studios slate of films. “What Marvel does is to create films which work within a whole, what’s called the Marvel Cinematic Universe, but also stand on their own,” Townsend describes. “And I think that shows in the filmmakers that they choose -- every director brings something very, very different to the table. You should be able to watch a Guardians of the Galaxy Volume 2, and have never seen any other Marvel movie, and enjoy it. Kevin Feige particularly, but also Lou D’Esposito and Victoria Alonso, who are creatively in charge of the franchises, are overseeing everything. They’re looking down at the films and saying, ‘Okay, this has to go here, and this moves here.’ There is a certain control that is happening, so that they all fit within the world. But there is a huge amount of freedom that’s given…from a production design, from a set design, from a visual effects point-of-view.” After conferring with Marvel, in envisioning Vol. 2, Townsend utilized The Third Floor to do the film’s previsualization. “It was by far the biggest previs challenge that I’ve worked with,” he said. “Previs is used by Marvel, generally, in the way that they work: to define story points and beats, not only to figure out where the camera will go, but also the edit and the pacing. [Marvel is] obviously a film studio, but they’re almost like a mini visual effects company.”

During previsualization, Townsend determined how much in terms of sets, props, and character elements needed to be realized on set and photographed during principal photography. “How much of it do you have to actually physically create in order to pull that off?” he wondered during this vital stage of Vol. 2’s process, noting that the key production team would also designate certain shots to be fully computer-generated. “What would help the actors, or what will help from a lighting perspective, or from a directing point of view? And how much of it can we maintain and can we retain in the shot in the end? We use [previz] as a storytelling tool, but we’re also using as an analysis tool, so that each department knows how much to create.”

After four months of shooting in Atlanta, Georgia through post-production, and weaving his way through the various stages of completion of the more than 2,000 shots in Vol. 2 at eight different effects companies, Townsend professed that he derived most satisfaction in being totally immersed in every screen element that finds its way into the final product. “I get to touch almost everything in some form visually,” he says, “whether it’s cleaning up a wig line, or creating an entire world, or creating a CG character, or finessing a bit of makeup; we do the full gamut. I think that the fun of my job, the creative part, is every single aspect of the whole; it’s not one individual thing. It’s the problem-solving on a day-to-day basis, and the range and the variety of things -- every day was a surprise. My brain is constantly being stretched from one thing to another; you can never settle. It seems like magic to me every day.” From his Los Angeles base, Scott Essman has been writing about motion-picture craftsmanship since 1996.