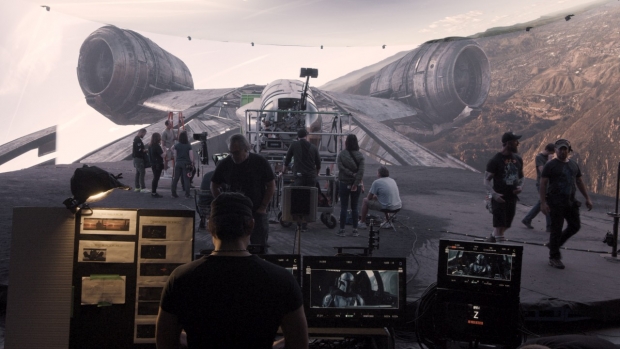 Lights, camera…magic! After 47 years, the story of how a group of home movie makers and small gig workers created the most spectacular, groundbreaking cinematic visual effects ever seen is now being shared with the world.

Lucasfilm’s special visual effects, animation and virtual production division, Industrial Light & Magic (ILM), is known for their award-winning work on blockbuster franchises like Star Wars and Jurassic Park. But while their work is well known, the misfit geniuses behind the galactic explosions and dinosaur mayhem are not easily recognized, and Academy Award-nominated filmmaker Lawrence Kasdan has seen to it that ILM’s legendary story is shared with the world in a new, six-part documentary series, Light & Magic, now airing on Disney+.

“I've been around visual effects for so long, and have never really understood it,” says Kasdan. “The way I understand things is always through the people who do it. And so, I think that's what it was. I had seen so many miraculous things created by these people. But I really didn't know what the process was, what the collaboration was like, what the feeling was in the room. That's what I was after.”

Janet Lewin, senior vice president and general manager of ILM, adds, “Even for someone like me, who's been at the company for 28 years, it's still just so inspiring to hear and see the impact that the geniuses at our company have had on the film industry, and those creative partnerships that we continue to have today. I think we're all really honored to be celebrated in this way. It's an amazing experience.” The documentary series takes an in-depth, behind-the-curtain look at the work that inspired some of the most legendary filmmakers in Hollywood history, and follows the stories of these VFX and animation enthusiasts, how they fell in love with the craft, some of their earliest personal films, and how a gang of outsiders came together as a family not only to bring George Lucas’ vision to life, but also to lay the foundation for one of the most successful visual effects and animation production companies in history.

“It’s really nice to have a record of our friendship out there and it's really great to have something to show my kids and grandkids,” says Phil Tippett, director, visual effects supervisor, and founder of Tippett Studio, who was one of the original dozen asked to join Lucas when he started ILM to bring Star Wars to fruition. “When we were working on these things, I was leaving at eight o'clock in the morning, and many times wouldn’t come home until ten or eleven o'clock at night. And so, the kids wouldn't know anything about what we were doing. I mean, they knew the movies that we were working on, but they didn't know precisely what we did. Now that they do, they’re kind of amazed.”

But when Tippett, and a handful of other visual effects fans like Dennis Muren, were originally called up from LA by Lucas, they had no idea that Star Wars would even be possible to create, let alone a success. Muren and Tippett had previously known each other from working at Cascade Pictures in Los Angeles, which specialized in commercials for companies like Campbell and Green Giant. So, Tippett and Muren thought they were simply jumping at the chance to do feature films, not necessarily make history. “We told our friends and family that we’d only be gone for two years, but that we’d be back,” remembers Muren, now senior visual effects supervisor and creative director at ILM. “We had no idea that films were going to go in this direction. But people started enjoying this stuff because the stories were different and there's an energy to all the effects that we do that are not as lyrical and slow as in a lot of films. And here we are. We’re still here.”

Tippett adds, “We never thought it would happen. George hired us with the caveat of, ‘If this doesn't make any money, it's game over.’ At least from my perspective, we were such huge admirers of George Lucas and we got to make the leap from commercials to a big feature. We just figured, ‘We'll probably go back to doing commercials again.’ There was no reason to believe it was going to last and become the business that it did. We were at the prow of the ship and really breaking a lot of new ground over and over again, never thinking about the wake. Who cared about that?”

And as impressive as their portfolio of work has become – from Back to the Future and Pirates of the Caribbean to Free Guy, Loki, and The Batman – the real source of ILM’s success has been the relentless passion of the people who work there, which is the real focus of Kasdan’s documentary. Kasdan discovered that, for many, it was simply in the name: Industrial Light & Magic.

“Like me, many thought it was the best name for a company they’d ever heard,” he explains. “It was so romantic and so mysterious. And these people, whether they were in Hong Kong or England or wherever they came from, they were caught, just like me, with ‘What's that? That sounds like my dream come true.’”

Kasdan continues, “One of the unique things about ILM is it has been a very welcoming, generous place for 40 years. Not every company you can say that about. But there are a lot of benevolent feelings from the top, beginning with George. George was a tough boss on A New Hope, but he knew the kind of people he wanted there. And they stuck.” And roughly two decades after ILM’s birth, Lewin became one of those people.

“I'm not an anomaly of someone who's really spent my whole life at the company,” says Lewin. “In fact, just last week, we honored 56 people who have been at the company for 20 and 30 years. We create this culture of collaboration and community and a love of the art of visual storytelling. And I think that people who get inspired by that, stay. We were fortunate to be at this intersection of creativity, production, and innovation. And that's rare.”

Lewin is hoping that Kasdan’s series shines a light on the company that’s become home to her and many other creatives, as well as instills a desire in viewers to get into the industry, and to come work for ILM.

“We’re growing still, and we're looking for talent everywhere,” she says. “We have the full suite of creative talent within our company, including people who still do physical miniatures, we have an incredible art department, and then we also have individuals winning scientific and technical achievement awards. So, we kind of run the gamut of all sorts of different techniques for filmmaking. And that's, I think, what makes it interesting every single day. You pour your life into a job like visual effects, but it's extremely rewarding.”

Kasdan adds, “I loved having directors say to me, ‘I didn't know what I wanted when I went to ILM, but they helped me find it.’ I'm a fan of human behavior. I'm a fan of how people work together. I find that story very moving. And then, if those people are able to create something that we've never seen before, that's just gravy.”