For the VFX supervisor and Alpha Studios founder, the need to ‘be so good they can’t ignore you’ has fueled her drive to succeed as a woman, Chinese immigrant, and wheelchair user, and advocate for others in an industry short on representation of those with visible, or non-visible, disabilities. 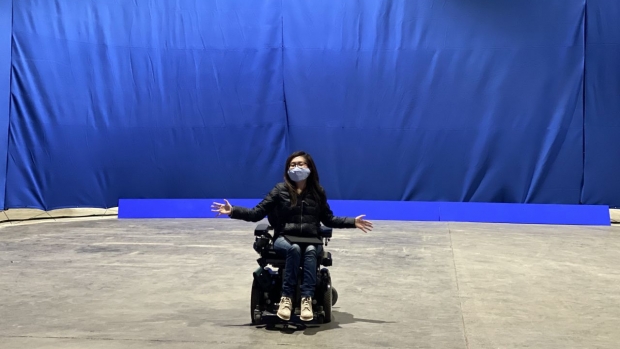 While attending the University of Southern California, Kaitlyn Yang received a piece of advice that has stuck with her throughout her 12+ year visual effects career.

“One of my professors told me, ‘Be so good that they can’t ignore you,’” remembers Yang. “When I was first getting into this business, I was worried about rolling into a conference room and not getting the job because I was in a wheelchair. But now I tell people, ‘I may not be able to run a mile in five minutes, but if you’re looking for VFX perfection, I can do that.’

Yang’s visual effects credits in film and television range broadly, from the bloody and gory The Walking Dead, to animated comedies like Robot Chicken and heartfelt features like The Odd Life of Timothy Green. Yang has also served as visual effects supervisor on shows like Modern Family, The Good Doctor, Grey’s Anatomy and, most recently, The Shrink Next Door, which debuted in November and is currently airing new episodes on Apple TV+. The visual effects artist is also the founder of Alpha Studios - one of the first woman-owned visual effects company in the U.S. - and has certainly become a film industry force that cannot, and will not, be ignored. Though she calls her acceptance letter to USC her “golden ticket” into the business, Yang also credits the realization of her dreams to her parents, who fought from the beginning to give her the same chances as anyone else to reach her goals.

“I was born in China and my family, and I immigrated here mainly because of the way the government is run over there,” Yang explains. “If you have a visible physical disability in China, you're not really part of society. You can't attend school or do any of that. Fortunately, I was born to very determined parents, and they wanted me to get a shot at life like anyone else. I'm in debt to them.”

After moving to the U.S. at age nine, Yang says she “caught the visual effects bug early on,” learning much of her English through watching movies rather than memorizing flashcards.

“My parents got me my own Blockbuster card and I was able to get a movie a day,” Yang recalls. “And I just remember, back in those days, in like 1997, Star Wars was just flying off the shelves at Blockbuster. And I was like, ‘What is this? Why is it so popular?’ When I watched The Phantom Menace, I was like, ‘This is so cool.’ And I think it was the combination of watching these movies, watching ‘The Making Of’ portions and then going to the library to do my own deep dive and look up how the movies were made that really shaped my childhood and my interest in visual effects.”

She adds, “When I got to high school, and working to get into the film business became more of a reality, a lot of people were like, ‘Hey, do you have a backup plan?’ Because it's really hard to get in there.’ And I was like, ‘I'm already taking on the world as a wheelchair user. Bring it.’”

Though initially fearful of the rejection she might face as not only a wheelchair user, but also a woman and minority, Yang says she quickly discovered that her disability actually provided the opportunity for improving production efficiency.

“A lot of golden nuggets of wisdom can be found when you work with people who are different from you, whether it's someone of a different race, gender or physical ability,” says Yang. “One of the things that I quickly learned on set of one of my projects was that I needed direct access to one of the particular stages and, instead of going the long way around every time to get on and off the stage, the construction crew made me a few ramps. And in the course of our filming, we were able to shave off about an hour of our day with set up and take down because all the departments with carts were also now able to roll up and down the stage more easily. It seems like a no-brainer, to add ramps to shave off time for everyone. But I don’t think that would have been put into play if I hadn’t needed it for my wheelchair.”

Yang has also found that her unique life experiences – not just wheelchair focused – also contributed to her ability to create great work on The Shrink Next Door, a series based on a true story from the 1980s about a middle-aged man named Marty (Will Ferrell) who seeks guidance from a therapist named Dr. Ike (Paul Rudd) after Marty loses his parents. Ike does help Marty turn his life around, but then begins to take over Marty’s life and boundaries are crossed. The story covers Marty and Ike’s journey together over 30 years.

“A few years ago, I started dedicating a lot of my own time to personal growth, and starting therapy myself after my grandpa passed away,” says Yang. “I was having panic attacks in the car and knew I needed more tools to help me regulate through those emotions. I learned a lot about past traumas and wounds and how they manifest in your own life. So, when I was approached to work on this project, I thought this was a very niche slice of life that we hadn’t seen before. It shows both sides of the coin when it comes to therapy and being very vulnerable to a stranger.” Produced in collaboration with production designer John Paino and cinematographer Michelle Lawler, Yang’s work on the series has consisted of everything from removing reflections from the large 80s eyeglasses of the show’s characters and augmenting the richness and agedness of wall graffiti, to creating the authentic feel of 80s New York as it grew and changed over three decades… all while filming in modern day Los Angeles.

“I'm a big fan of the 80s glasses,” says Yang. “In my opinion, with glasses, the bigger the better. But it’s a bit challenging for visual effects because those big glasses capture the reflection of everything around you. So, we had to work on carefully taking out those reflections so we could really look into the eyes of these characters and see what they’re thinking and feeling” She continues, “And there was a ton of work that went into making this seamless VFX and really trying to portray specific neighborhoods in New York and capture their essences. It's a period piece, so a lot of it is set extensions and making the world look and feel tied into the story and time period.”

Yang and the team also did extensive research into neighborhoods, buildings, even trees and foliage planted in certain areas over that time. While some foliage is meant to fade into the background, it’s Yang’s job to make sure something as seemingly minor as a tree stands out in exceptional ways when it’s tied into the more intimate parts of the story.

“There is a cherry tree in the show that is very dear to our main character, that’s been passed down through his family and ties together everyone who has lived in that house,” says Yang. “But the tree on set wasn’t as grandiose as what the symbolic tree needed to be. So, we went in and augmented this particular tree with the seasons. We were pulling out all the tools in our back pockets to reach our design goals for each frame, doing these strategic hand-offs with what we researched, then taking an idea and running with it.” And while Yang says that building this repertoire of knowledge is “one of the gifts of VFX that just keeps on giving,” it was the opportunity to “mimic life” that really drew her to the project. And it’s a message that ties into her advocacy for diversity and inclusivity in Hollywood, as those with disabilities who work in the industry are often vulnerable, seeking help from strangers without the security of a safe space, like a therapist's office.

“With a period piece like this that’s also a slice of life, you, as a visual effects artist, are not just mimicking light and shadows, you’re mimicking a real emotion, a vibe, if you will, and our own life experiences play directly into that creativity and artistry,” says Yang. “And I think it’s important that the people behind the screens, not just those we are filming, should also mimic the world that we live in.”

The name ‘1IN4” represents the CDC statistic that one in four adults in America identify as having a disability, whether it's visible or non-visible. “But we rarely see any of that represented, nor do we offer safe spaces to talk about it,” says Yang. “And because there hasn't been this safe space, this largely contributes to me being one-in-one on all the sets I've ever been on. And I think it does something to your psyche when you don't see yourself represented anywhere. Which is why we're really honing in on getting more people with disabilities hired. But I think it's up to all of us, allies included, to help make that change”

Let's talk disability and employment. #NDEAM is the perfect time to highlight the importance of equal opportunities in the workplace for people with disabilities and push back against ableist questions at work! We love @kaitlynyang's perspective as a disabled business owner. pic.twitter.com/9mxw0voMHw

And the step toward change could be as small as building a ramp for someone in a wheelchair.

“I don't think me asking for a ramp is anything special,” says Yang. “I mean, we blew up the Death Star. We can definitely make a ramp. It’s just about reframing that mindset.”

She continues, “I tell people, ‘Imagine I have a director’s chair on four wheels.’ It’s an accessory that helps me do my job. I’d love for us to get to the point where we're looking at something like a wheelchair the same as how we look at glasses. With the right tools, I can do VFX and VFX supervising as well as anyone else.”