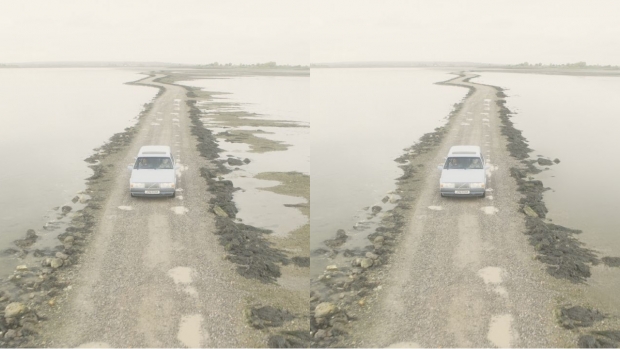 Sky / HBO’s psychological thriller, The Third Day, is a visceral, six-part drama set on the mysterious British island, Osea, a captivating and distortive world where all is not as it seems.

The first three episodes, “Summer,” written by Dennis Kelly and directed by Marc Munden, see Sam (Jude Law), drawn to a mysterious island off the British coast. Isolated from the mainland, Sam is unable to leave the idyllic and dangerously enchanting world he has discovered.

“Winter,” the last three episodes, written by Kit de Waal, Dean O’Loughlin, and Dennis Kelly, see Helen (Naomie Harris) as a headstrong outsider who finds herself inextricably drawn to the island in her pursuit to seek answers.

With over two decades of experience, VFX supervisor Ivor Middleton led the visual effects on the project, working closely with both directors, creatively developing ideas throughout. As The Third Day is very much a dramatic piece, the VFX were often invisible, but integral to the story.

According to Middleton, “In a distortive world, we had to create photoreal effects that in reality, were impossible; they had to look subtle to fit in with the tone and look of the series.  Many of the shots were quite complex and, in tying in with the symbolism and mythology of the narrative, had to be created to appear at exactly the right moment to enhance and intensify the dangerously enchanting world. Pulling this off was essential to the viewers understanding.  The VFX had to be subtle and not overpower.” One of the fascinating things about the show is that it’s set on Osea island, in the Blackwater Estuary, which is a real island with a causeway only open twice a day. Middleton noted that a good part of the show was shot there, which presented considerable logistical problems for the production. “We were cut off by the tide just as the protagonists are in the script,” he shared.

Each vendor handled a broad range of shot types, including environmental work, sky replacements, and changing coastlines. The island had to look more remote than it actually is; VFX was used to modify horizons and shorelines. For the Causeway itself, the filming window was narrow because of the ever-changing tides, so a great deal of work went into matching water levels and getting them to look right for the narrative.

The causeway plays a key role in the story; the aerial shots were stylized, apart from the elements of Sam in the car, and were created entirely in CG. These shots show how the serpentine, umbilical-like slither of land connected to the mainland is the only path on or off the island. There was a considerable amount of creature and animation work on shots with thousands of crabs, crickets, a plate of meat that comes alive, and other digital elements. “One of the things that was interesting about the animation was that it all tied in with the mythology of the narrative in some way,” Middleton said. “There are quite a few shots of crickets, which are a recurring motif throughout the ‘Summer’ series, and also appear as various props and artwork we see as well.”

“Summer” concludes with one of the biggest shots undertaken, where a swarm of locusts rise above the island.

One of the show’s biggest challenges, and one of its most creative, was the acid sequence that spanned episodes 2 and 3. “IMG handled quite a few shots in this sequence, the meat coming alive in the ritual room, and the stone sweating at the chapel. We also picked up and finished quite a few shots which other vendors had started but were unable to finish due to the COVID-19 crisis,” Middleton explained.

The sequence also involved people sitting around a fire wearing strange masks, he added, noting “the intention here was to make it ambiguous as to whether the people were wearing masks or not; they looked like faces, but with something very odd about them.”  One of his favorite shots was the moment that Sam is led away by Mrs. Martin and seemingly floats up above the street. “Again, this was a shared shot that we completed,” Middleton added. “While the shot was filmed in camera, we added people from an element shoot floating up in the sky, defying gravity, and dancing on the roof of the Seabird Hotel.  At the cast and crew screening some mentioned that they didn't remember shooting people on wires that night- so I guess we got that comp right!” Munden didn’t want to be too prescriptive with the VFX. “He was looking for all involved to bring their creativity to the sequence,” Middleton said, “as it was a collaborative process of concepting and developing ideas throughout.”

Commenting on Middleton’s role on the production, the show’s overall producer, Adrian Sturges, said, “Ivor and IMG took on a large number of shots for the show, some of which ended up needing a very inventive and creative approach. I was impressed by his team's dedication to getting the results the directors were looking for. The Third Day is a really ambitious project that was looking to break new ground - in VFX as well as in every other department - and Ivor had a really important role to play in realizing that ambition."

Middleton joined the project during the prep stage, supervising the shoot that took place mainly on Osea, but also on a set interior of the Oyster Pub at 3 Mills Studios in London.  When the final shots were delivered 14 months later in August 2020, the world was a very different place; the majority of post-production took place during the height of lockdown. Explaining how the production dealt with the pandemic, Delicata said, “From a technical perspective, we had to switch to remote working with all our vendors overnight. But it was surprisingly smooth.  We used a combination of Zoom and Google Meet for daily communication and Evercast and Clearview for client review and shot approval.  For a company like IMG, this was perfect, as they bring together experienced artists who mostly work remotely anyway so they had everything in place when the entire production and vendors had to switch to remote working.”

“We definitely missed the face to face client sessions and being able to view the dailies in a screening room,” Middleton concluded, “but everyone was able to adapt to the new working practice that’s now in place for whatever the future holds for us all.”

The Third Day is available to watch on Sky and Now TV in the UK and HBO and HBO Max in the US.