The VFX supervisor on Barry Jenkins and Prime Video’s period drama, about a young woman’s desperate bid for freedom in the antebellum South, shares how she helped plan and deliver over 1,000 visual effects shots, ranging from 18 minutes of a town on fire to an actual full underground railroad hub. 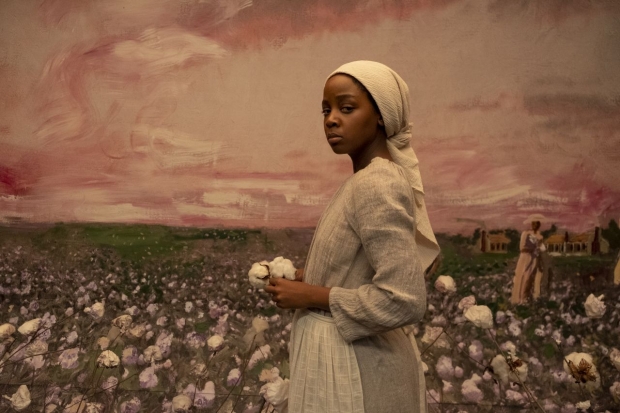 Now streaming on Prime Video, Academy Award winner Barry Jenkins’ The Underground Railroad, based on the Pulitzer Prize-winning novel by Colson Whitehead, chronicles Cora Randall’s (Thuso Mbedu) desperate bid for freedom in the antebellum South. After escaping a Georgia plantation for the rumored Underground Railroad, Cora discovers an actual railroad full of engineers, conductors, and a secret network of tracks and tunnels beneath the Southern soil. As she makes her way to freedom, Cora is pursued by Ridgeway (Joel Edgerton), a bounty hunter fixated on bringing her back to the plantation from which she escaped, especially since her mother Mabel is the only one he has never caught.

As the series’ VFX supervisor, Dottie Starling, whose credits include Oscar winners 12 Years a Slave and Selma, as well as Killing Them Softly and Netflix’s Ozark, work began with project prep in April 2019, finishing when the production wrapped in March 2021. “We had a 113-day shoot, with a few breaks in-between,” she says. “There were over 1,000 VFX shots, which include all of our clean-up work as well. There was a lot of work done to make locations look period accurate, cleaning up portraiture shots, cheat where there would and wouldn’t be electricity for the locations… There are a lot of shots you wouldn’t know are VFX.”

Key visual effects for the series included production of an entire underground train system. According to Starling, “We did tunnel extensions and all the steam for those trains coming in. We created the whole Chicago Train Hub environment.”

“We also did the whole town that burns down in the ‘Grace’ episode and the whole Valentine Farm shootout - almost every shot was a VFX shot in those two episodes,” she adds. “We also did the ghost tunnel sequence which opens up the show’s first episode. Finally, we did a lot of the scenes that showed the brutality that took place during this time in American history, such as the burning, whipping, and scarring, which are things Barry and I had long conversations about in terms of how we’d treat them.” For the Train Hub, production relied on a partial practical set using the Savannah Train Museum; trains the characters walked close to were shot at the museum. “The wall behind Cora was filled in with VFX and Cora’s POV shot of Caesar had a full CG build,” Starling explains. “We created all the architecture around the two standing in the center circle, which was actually there. Using very little greenscreen or bluescreen, we tried to move them around as best we could based on the limitations of our shooting schedule on the day. We had one day to shoot that whole night interior where she meets Caesar, and we were pushing it until the sun was coming up. But the nice thing was that the VFX subtly fit in. The whole point was to believe that the Train Hub really existed.”

“Barry told this great story to the actors and extras at the start of the day, that when he was young, he really believed there were trains underground when he first heard about the Underground Railroad,” she continues. “But that night, he was actually getting to make trains underground. There’s actually a big Train Hub. And he goes ‘We built it, we did it ourselves.’”

In discussing the Train Hub with ILM, who produced the visual effects, Starling recalled, “I talked to ILM, who did the Train Hub, and said, ‘It has to fit in and be believable… feel like you’re really there and it could really exist, to the point that someone watching might say, ‘Wait, did I miss this in history? Were there really trains underground?’’ The thing is, the way it was written, is that Cora was never really there. It’s all imagined in her head. ILM did a great job on all that work. I had them lay it out, we picked five shots with our production designer, Mark Friedberg, and had ILM lay in simple architecture on five frames and get a buy-off on that approach. Once we had that, we started taking it into moving shots and filling in the in-between pieces. Mark set the look and ILM matched it.” 18 minutes of town burning sequences were featured in one of the show’s last locked episodes. “It was a lot of work and probably one of the most expensive episodes we did,” Starling reveals. “The way we approached it was that this woman had thrown a lantern, setting fire to the house that Cora and Grace were staying in. The fire had to spread evenly, so we set the pace of how it burned, what burned, and how it jumped. The whole episode was shot without bluescreens or greenscreens, so I talked to ILM about how to set the best approach for the work.”

Starling took a frame from each shot and had ILM lay out how the fire would move and jump, where the smoke would be, how dense it would be, and spatially how far it would come into the center of the town. “Setting those lessened the workload: less rotoscoping, fewer 3D CG trees to make, things like that,” she says. “They were also able to use elements from on-set practical effects. Once they laid out their progression, we showed it to Barry and his editors, who came back with notes. For the drone shot, we started laying it out back in May 2020. We ended up having to create full CG trees and smoke, clean up all our equipment around the location, and create ash… I hate to say it’s pretty, but it is a really pretty shot.”

With the director treating the series as a 10-hour film, rather than set of episodes, there was never a locked cut. This meant the VFX team had to agree on timing and progression of the sequences showing flames and smoke in pre-production. “You don’t want to turn over a really huge shot and it gets cut,” Starling admits. “We had a discussion with Barry and his editors about needing a guarantee that a shot would be in the cut if we started working on it. That’s why we started working on the opening in Tennessee first, because we knew that was always going to be there. I knew which exact take it was going to be the day we shot it. We always knew the drone shot in ‘Grace’ would be in there. We knew Big Anthony wouldn’t go away, so I picked a beginning and end shot of his scene.”

“Barry was going to cut the way he was going to cut,” she continues. “That’s just the way he does things, and I wouldn’t want him to change that. From a VFX standpoint, especially in episodic, you’re used to ‘cut, director’s cut, studio cut, locked cut,’ and then you know where to go. This wasn’t going to be that way. We had a few conversations that really helped the approach I set up with vendors. They would talk about how much it would cost to do the work, but we also talked about how many weeks they would need to do a temp, then a semi-temp, then a final 4K delivery, and they could staff based on that, which helped a lot.”

Looking back on the project, Starling shares how much she enjoyed working with Working with Jenkins, Friedberg, and cinematographer James Laxton. “Mark and I did Selma before, and I love working with great DPs and directors,” she concludes. “That’s definitely one of the things I enjoyed most. And of course, Plan B, because they do incredible projects and they’re the type of projects I like focusing on.”