How Digital Domain Brought Photoreal Characters to Life in ‘The Quarry’ 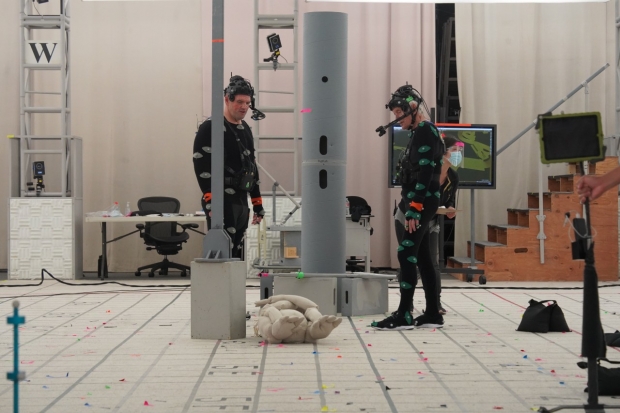 When making its ensemble-driven slasher game, The Quarry, video game developer Supermassive Games set out to raise the bar for immersive, photorealistic visuals. This lofty goal demanded that the company expand its tool kit, and to that end, Supermassive enlisted the help of Oscar-winning VFX studio Digital Domain -- leading to the invention of new live-action facial animation technology.

“Right from the start, we were blown away by Supermassive Games’ ambition, and we knew our experience with feature films put us in a unique position to help,” says Aruna Inversin, creative director and visual effects supervisor for Digital Domain. “We started with the same tools we use to create movies and episodics, then adapted them for game development. Basically, we came up with a new, faster way to animate photorealistic digital characters.”

The interactive, survival-horror gameplay of The Quarry is anchored by the performances of its cast, as well as Supermassive’s photorealistic digital depictions of that cast.

“It was important for us to make every movement and reaction as realistic as possible, to create an immersive experience where players truly feel the weight of their decisions and connect to the characters,” says Will Byles, game director for The Quarry. “We wanted to get as close to the likeness of the actors as possible, both in terms of the super high detail scans and the subtleties and nuances of their performances. With its history of award-winning VFX and pioneering digital human work, Digital Domain was the best choice for this.”

The Quarry’s cinematic dimensions also come in the form of its "Movie Mode” -- a feature that enables players to customize the personality traits and actions of each character, and watch the story unfold accordingly. Other visual settings evoke filmmaking aesthetics, such as an 8mm-style “Indie Horror” film grain, a VHS-inspired “80s Horror” look, and a black-and-white "Classic Horror” filter. Digital Domain began its work on the game’s photorealistic facial animation by conducting a series of facial scans of every cast member. The company used these scans as templates and reference points to create distinct facial shapes and expressions that would bring the cast’s performances to life. The team then sent their collected data to the artists at Supermassive, who were tasked with creating looks for the in-game characters.

For performance capture, the cast of The Quarry reported to Digital Domain’s stage in L.A., where they acted out their roles in full mocap suits and a facial capture rig. Each character was performed individually or in small groups, acting out multiple iterations of the game’s story to give the game a variety of disparate narratives. (These many scenarios included an array of unique death scenes for each character.)

All told, the cast of The Quarry underwent 42 days of motion capture to produce 32 hours of captured footage. Once the digital characters and live-action performances were completed, their combined data was fed through Digital Domain’s Masquerade facial capture system.

First developed to create Thanos in Avengers: Infinity War, Masquerade 2.0 has evolved from its initial usage on feature films to help craft facial shapes for productions across mediums. The tool analyzes live-action footage and combines it with the individual and unique library of performers' facial shapes, then blends them together with a CG character. By way of machine learning, it creates a photorealistic, CG version of a performance and fully animates it. In the case of The Quarry, Masquerade 2.0 enabled each performance featured in the game to be enhanced with every facial movement, emotive reaction, and other nuances that were captured through the work of the ensemble cast.

“Masquerade is an incredibly powerful system, but ultimately it’s the performances that really make The Quarry stand out,” says Digital Domain senior producer Paul Pianezza. “We wanted to ensure that our tools amplified what the cast brought, so each performance down to the subtlest movement is as true to the live-action performance as possible.”

“But for a game like The Quarry that is built around interactivity, simply having film-quality digital characters wasn’t enough,” Pianezza continues. “It needed to be able to edit those digital characters in real-time, and have those edited results be instantly ready to go without the need for additional touch-ups from artists. The only problem was that the tools Digital Domain needed didn’t exist… yet.”

Digital Domain opted for an open-source eye-tracking solution called “Gaze ML,” which it modified over a three-year period. The team used machine learning to identify the distinct properties of cast members’ eyes. From there, Gaze ML allowed for improved accuracy in tracking, as well as enhancement of the look of digital eyes -- particularly when paired with a high frame rate, head-mounted camera.

Pivoting to the stabilization problem, Digital Domain devised a brand-new approach to stabilizing data from the headcam. The team developed a technique that allowed them to analyze their capture footage and compensate for any shaking, blurring, or jostling typically encountered when wearing facial tracking equipment. The result: Cast members were free to perform their roles with unrestricted movement - including running and jumping - while wearing their required head rigs. Moving further into the process, the Digital Domain team created what would become the crowning achievement of its work on The Quarry: a new technology, Chatterbox. Powered by machine learning algorithms, Chatterbox analyzes performers’ unique live-action facial expressions, while preserving the lifelike qualities of their movements. The technology streamlines data to hone in on the best facial options available, and allows digital characters to be uploaded and edited directly in a game engine.

When paired together, Masquerade 2.0 and Chatterbox enabled the Supermassive team to access the entire library of facial expressions from every cast member of The Quarry. With the data running in Unreal Engine, the game’s developers could see its characters in detailed digital environments, allowing them to make necessary adjustments to the performances that would remain true to each actor’s facial tics and mannerisms. (This approach also removed any potential need for expensive reshoots from the equation.)

Ultimately, over 250 million frames of The Quarry were rendered by Digital Domain, and only 27 of 4,500 shots deemed “game-quality” required alterations from artists during post-production.

“Creating high-quality, photorealistic visual effects used to be unique to feature films, but the technology has evolved, and given our decades of history and ongoing success, we are in a unique position to bring professional-quality VFX to any screen,” says Digital Domain global president John Fragomeni. “We have some of the best artists in the world, so there’s really no limit to where and how we employ our tools.”

The Quarry is now available in both physical and digital formats for PlayStation 4, PlayStation 5, Xbox One, and Xbox Series X|S, and digitally on Windows PC via Steam.