How Advances in VFX Transform the Potential for Storytelling

Ever seen a “ghoulie” killed by a chainsaw through the chest? If you’ve seen the Netflix series ‘Daybreak’ you have, and I thank you for watching. 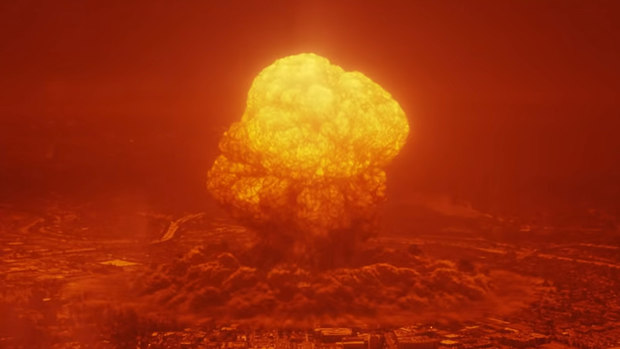 An adaptation of my graphic novel of the same name, Daybreak takes place in a post-apocalyptic world where groups of high school students navigate the terrors of teenage tribalism – and worse.

Originally, I wrote Daybreak as an “unfilmable” graphic novel – I distinctly designed it so that the greater details are omitted. It was designed this way to allow for the audience to “fill in the gaps” of the story, and feel like they were a part of the action. I wanted them to be able to use their imagination to draw conclusions, solve problems, and ultimately help the main character solve his way out of a problem.  In the graphic novel, I purposely don't show the monsters. They are alluded to, always lurking in the corner of the frames, but the focus is on the character’s journey. When I began talking with executive producer Brad Peyton, however, he presented solutions for creating the ghoulies and expanding the overall “grossness” of the story using visual effects. Brad and his team exceeded all of my expectations. Without giving anything away, Brad took a key element of my graphic novel – the fact that the main character was missing a limb – and with his VFX team brought it to life in a believable way.

It wasn’t until recently that visual effects accurately translated the over-the-top nature of comics while simultaneously keeping viewers engaged. It used to be that the viewer was always outside the story – not fooled by dubious fake blood or cheesy simulated flight – but now VFX transports viewers to a world they don’t have to leave until the story has been resolved. Today, visual effects can transport the viewer into a whole new world – an alternative reality that draws parallels to their current life and gives them the tools to navigate the unexpected. Visual effects take the every-day and turn it into something extraordinary. While these details didn’t necessarily drive the storyline, they created elements that deepen the world, reminding viewers that everything is not as it seems and to stay vigilant.  The way that visual effects were used to create and sustain the post-apocalyptic world was a driving force, in my opinion, that helped to create a smooth transition for Daybreak from a graphic novel to a TV show. So, about that chainsaw through the ghoulie’s chest: The VFX team worked their magic in post-production to make it look real. They put marks on the front and the back of the actor and the prop had to be at just the right angle. The goal of visual effects is to ensure seamless transitions, and by working in tandem with the cinematography, propel the audience deeper into the story.

Visual effects change dramatic potential and storytelling capabilities. While pretty much anything can be drawn, there are limits to what can be done with human actors. This is something that I tell my sequential art students at the Savannah College of Art and Design (SCAD). I teach the fundamentals of cartoons and drawing at SCAD, where I remind students that there isn’t a need to limit their creativity.

As a graphic novelist or comic book artist, working on adapting a graphic novel or comic for film or TV offers the opportunity to embrace the collaborative nature between the artist and the VFX team. This collaboration is of the utmost importance, something I work to instill in my students. My students prepare to become leaders in the sequential arts through a foundation in fine arts courses and an emphasis on collaboration. They are learning the art of telling stories sequentially, and learning how to sketch visual narratives that plot adventure, tell meaningful stories, and enrapture audiences. These students then have the opportunity to partner with the award-winning visual effects students – collaborations and edits that mimic the real world. Those students, the ones training to be VFX magic makers, learn how to draw and design in the classical tradition and then integrate those creative skills using digital tools, computer programming, and technical prowess. In some sense, that embrace of technology builds a bridge between the worlds of pen-and-paper and VFX.

Visual effects take the unfilmable and make it filmable. For Daybreak, VFX also created the unfilmable, presenting elements that hadn’t existed in the original novel. An example is the creation of CG animals like the notorious giant mutant pug, as well as birds and squirrels. I didn’t have these critters in the original story – the graphic novel is fairly minimalistic. However, these larger than life creatures worked in tandem with the characters and the scenery to help bring the world of Daybreak to life, creating visual accents to the characters and stories. Brian Ralph is the creator of Daybreak and a professor of sequential arts at the Savannah College of Art and Design.