Bill Desowitz sits down with the pioneering Ray Harryhausen to discuss the continuing influence of his special effects animation on todays creature features. 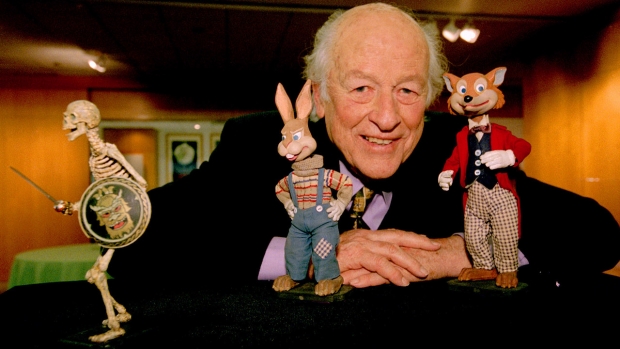 Legendary special effects animator Ray Harryhausen was in Los Angeles in April to promote his telling new book, Ray Harryhausen: An Animated Life (with Tony Dalton from Billboard Books), which chronicles the making of his famous films, including Mighty Joe Young, The Beast From 20,000 Fathoms, 20 Million Miles to Earth, The 7th Voyage of Sinbad, Jason and the Argonauts, The Golden Voyage of Sinbad and Clash of the Titans. Why divulge the secrets now to the spectacular skeleton battle in Jason, the development of Medusa in Titans and all the rest? Because the wizard is tired of seeing other people explain his work. VFXWorld editor Bill Desowitz caught up with the gentlemanly Harryhausen (who turns 84 in June and wouldnt mind opening a real Sushi restaurant in his honor) right before he presented the newly restored Mother Goose Stories and four other seminal fairy tales at the Academy of Motion Picture Arts and Sciences.

Bill Desowitz: Has it surprised you that youve inspired so many filmmakers over the years?

Ray Harryhausen: It certainly does. Im amazed and, frankly, because we set out just to make pictures of entertainment quality. And Im so grateful that DVD and laser disc brought these films out from, shall we say, extinction [through Warner Home Video, Columbia TriStar Home Ent. and Fox Home Ent.]. They seldom show them in the cinemas anymore. So its wonderful that these people have been encouraged to go on other things. I was inspired by [King Kong creator] Willis OBrien and the snowball rolls on. People are inspired by me, and I guess the computer generation will inspire other people. BD: They lose that larger-than-life fantasy element at home.

RH: It is fantasy. King Kong, if you see that on a little screen for the first time, its just another picture an ordinary picture. But to see it on the screen the way I did in 1933 on a 30-foot high screen [at Graumans Chinese Theatre] is a startling experience; it was a beautifully constructed screenplay. Thats what I found so intriguing.

BD: Are you intrigued by what Peter Jackson may be able to do with it?

RH: Oh, yes! If anybodys going to make it good Therell always only be one Kong original. But hell make the best, shall we say, interpretation. The one in the 70s was certainly uninspiring, because they lost all contact with what the picture is all about. It was a fantasy film and Peter Jackson has a love of the old Kong, so Im sure hell do a very good job. It may be different. It must be, I suppose. It was made in the Depression days and films were a rarity. Today youre inundated with entertainment so its a different world, so its hard to say how its going to be received. Lord of the Rings has been received so well; Im sure that his Kong will be equally successful. Harryhausen and Leonard Maltin talk during the George Pal Lecture on Fantasy in Film last month at the Academy of Motion Picture Arts and Sciences. © A.M.P.A.S.

BD: Does it gratify you to see your stamp everywhere on Lord of the Rings?

BD: Because you look at those creatures and it just takes you back, not to mention the presence of Randy Cook, one of the supervisors and a protégé of yours.

RH: Yes, he was an unusual fan who finally got into the profession. I get a lot of fan mail from young people and they say where can I get this done, where can I get that done? You have to learn to do it yourself. I had to because there were no books on the subject. Very little information. So I worked alone because it requires enormous concentration and I prefer to work alone. And Clash of the Titans is the only picture Ive ever had help in the animation.

BD: How many people did you have working?

BD: So its probably incomprehensible to you when you think of the thousands of people that work on these big effects pictures.

RH: I know. The screen credits are almost as long as the film.

BD: Another one thats going to be remade is The War of the Worlds by Steven Spielberg. That one must leave a bitter taste, judging from your account in the book about your meeting with George Pal.

RH: I wanted to make it long before Pal made it. I made drawings and did a test of it, but nobody was interested.

BD: And you wanted to make it in period, which apparently theyre not going to do this time either.

RH: Yes, I wanted to keep it in the turn of the century because it had an innocence, and now you have to have the atomic bomb to get rid of it or you have to do something of that nature. Harryhausen regarded his work on The 7th Voyage of Sinbad as an experiment. © Animation Art Gallery London.

BD: Speaking of Spielberg, its interesting how you noted in the book that while you appreciate the CGI dinosaurs in Jurassic Park the photorealism bothers you.

RH: It gets to the point when it becomes too real that you lose the fantasy element. Thats always what I strived for.

BD: I imagine it must have been an extra technical burden working in color eventually.

RH: It was. The 7th Voyage of Sinbad was an experiment. Id worked in color before and I worked on my own characters, but projecting color with what was a rear projector was a different matter, and at that time there was only one stop and the contrast would build up enormously so that when you inter cut the special effects with the live action there was quite a strong contrast of difference and color values.

BD: So tell me about taking on greater technical feats with Dynamation.

RH: Yes, well, Ive used it all through every film that Ive worked on. Its basically photograph and re-photograph with rear projected image on a miniature scale. And then coding an animated model. Thats the basic principle and through mapping processes and various other [methods] they get on the screen things that are quite amazing or used to be amazing. BD: No, no, theyre still amazing. I still marvel at the skeleton fight in Jason. To me, thats probably the most amazing thing in the movie.

RH: Well, nothing like it had been done and the Academy completely ignored it.

BD: What would you say were some of your favorite moments?

RH: Well, I think Mighty Joe Young pushing over the lion cage was one of my favorites. I think that worked out the way I wanted it to. You always have to compromise because of weather, because of many things. The skeleton sequence came out the way Id hoped, and the Hydra and the Medusa sequences in Clash of the Titans.

BD: I laughed when I read a remark in your book about the lighting of Medusa being modeled after Mildred Pierce.

RH: Yes (laughs), well, Joan Crawford stepped in and out of the light just across her face, and I thought it would be just great for Medusa.

BD: And lighting was always an important component.

RH: Oh, yes, I do my own lighting on the miniature sets yes.

BD: You sometimes take it for granted.

RH: Yes, youre supposed to. Thats part of the story. People do too much analyzing! Youre just supposed to sit there and enjoy it.

BD: Except for the filmmakers who have to sit and figure out.

RH: I know. I get letters from fans who said we ran it frame-by-frame on the DVD, and I found a pair of pliers on the left hand corner jiggling rafters, which you would never see normally because youre involved in the film. But people start looking for scenes today.

BD: Its hard to get that innocence back.

RH: It is very much. Because were over inundated with entertainment. In the bar, in the home, in the pub, everywhere you see entertainment. We used to wait on Saturday nights to see the next great feature like Dracula, Frankenstein, She or Pompeii. And it was a big event to go to the cinema. But people get bored today and they have to have an explosion every five minutes or it doesnt hold their attention, it seems. I think theyve got that from television.

BD: There is one encouraging thing Im seeing in the visual effects industry: theyre looking to integrate the effects more into the story again.

RH: Well, we did that. I mean, we used to be called special effects films, but we never looked upon our pictures as special effects pictures. I wear many different hats when Im involved in a film. Im not just handed a script and say put this in the screen. I work with the writer very carefully.

BD: Was going into space for First Men in the Moon a particular challenge as well at that time?

RH: Well, it was a challenge mainly because of the wider screen. They used Panavision on that and my rear projection technique that I used in all the other things had a lot to be desired because to project the oblong picture it fluttered in the middle. But you could overcome that, I suppose, if you spent millions of dollars making experiments. But we didnt have the time or the money. So I had to change the whole design.

BD: Were you satisfied with the results?