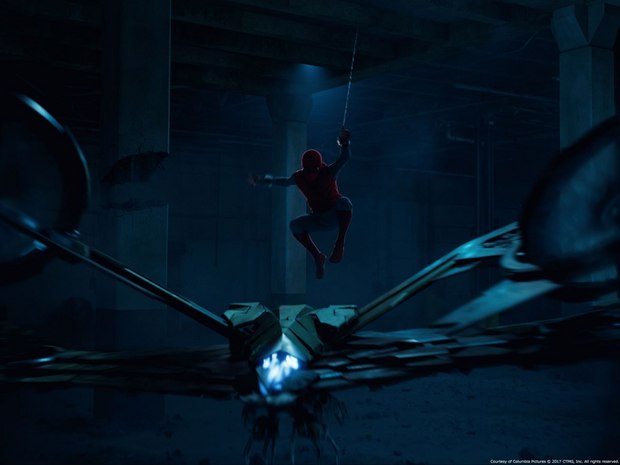 Dealing with the famous Wall Crawler from New York City is nothing new for Theo Bialek, who served as CG supervisor for Sony Pictures Imageworks on the two Amazing Spider-Man films. When the franchise swung into the Marvel Cinematic Universe, Bialek was provided with the opportunity to be a visual effects supervisor on Spider-Man: Homecoming.

“Our work focused on the third act, from the Vulture warehouse on to the end,” Bialek recounts. “We were the primary facility doing work on Spider-Man’s homemade suit. It’s essentially glorified sweatpants with his web shooters and visors, which are more mechanical. The Plane Heist and Beach Battle were other sequences that we worked on. We also did the work on the Vulture’s second suit [which gets damaged]. The bomber jacket, cargo pants and helmet stay the same but the wings differ as he upgrades to bigger system in order to do the plane heist.” The Vulture warehouse was primarily plate photography with shots of the ceiling collapsing being CG. Outside was mainly drone footage combined with CG shots of Spider-Man making his way to the billboard. “We did a lot of plate extension inside the warehouse because they did do practical explosions on some of the cement columns that get hit by the wings,” says Bialek. “The cement columns were only go so high, so we would do extension on those all the way to the ceiling. Anytime Vulture does a stunt, the wings, Spider-Man dodging, jumping, or flipping; that’s all CG. We stayed true to what they originally designed.”

Explosions were augmented along with extra debris and sparks. “We used Houdini to do a lot of our simulations,” Bialek reports. “Sometimes we’ll use Maya for rigid body sims, but generally, in this case, we’re doing destruction inside Houdini.”

Motion capture of Tom Holland as Spider-Man was a great resource. “We would look to a lot of references where we found stuff online where people would jump over a speeding car,” he continues. “It was definitely viable reference in seeing how someone’s body reacts as they’re anticipating a dangerous object moving toward them. Combining that with the motion capture that we had and practical reference of things it was useful in creating a genuine performance that we’re going for.”

A couple of aerial plates of Coney Island were shot for the Plane Battle Sequence when Spider-Man attempts to thwart Vulture stealing alien weaponry from cargo aircraft belonging to Stark Industries. “If Vulture were to extend his wing up into the air while latched onto the plane, the drag would just rip him off,” Bialek remarks. “We were always trying to keep the characters low and aerodynamic. Vulture attacks by falling towards Spider-Man and trying to knock him off.”

The environment and plane were challenging to render as well as having to fly through volumetric clouds and needing to create a cloaking device based on current technology. “We referenced a tank that uses camera rigs and tiles which rapidly heat and cool,” says Bialek. “The tank can mimic the heat signature of any other vehicle or the objects behind it.”

Ads and tests from Lexus and Mercedes were helpful as cameras projected a 360-degree image around a moving car covered with LED panels. “We took that idea and mapped an electronic billboard on the entire surface of the plane. It’s this low-tech cloaking device that would be effective from a distance, which is what you would need.” In-house motion capture was conducted using a modified Kinect system from Xbox. “An animator can go into a room, act out a bunch of different performances, record it in real-time, and create a 3D model that can be loaded into Maya and used as reference. We used that quite a bit on the plane. With all of the wind blowing around and the fact that Spider-Man had to hold on or shoot a web, the nuances of Tom performance were somewhat lost.”

The Beach Battle was a hybrid of plate photography and CG shots. “They created this huge sandbox with flame bars on a soundstage in Atlanta,” Bialek relates. “Encircled in green screen were a 747 engine and landing gear that they painted up and strew about. We created a 3D world based on the tiles that was shot on the beach at Coney Island. A fair number of shots needed to be all CG just because they came in late so we didn’t have a plate ready for them.”

FARO scanners allowed for 3D representation of geometry and HDRI captures were taken to document the different lights. “We went on location to Coney Island, and scanned the majority of the area that our plane flies over so that we could recreate the city digitally if required. At the end of the day, the area that we needed to build shrunk, but it was good to have all that reference, to be there, and to get a sense of it.” Producing a baggy rather than skin tight suit was a new addition to the Spider-Man franchise. “It has drawstrings that need to bounce around, a floppy hood, and a lot of folds and fabric that we didn’t necessarily need to contend with on previous films,” Bialek notes.

“You could set up the automatic simulations to run on this, but you’re always going to get the hood flopping around in his face, and you can try to pin in it back like they did onset sometimes. However, we needed a more reliable and controllable setup for that cloth,” he continues. “The solution came in the form of Marvelous Designer, which creates clothes and fabrics in 3D. The advantage of us using it to build our outfit is that you can construct the geometry exactly the way real clothing is made, so the seamlines and the size of the fabric is all physically accurate to what’s out there.”

In the past, the creation of digital effects was much more of a linear process but nowadays the requirement is to be flexible at any stage of the production, Bialek observes. “Marvel’s team is so focused on the movie and story that they don’t want to lock themselves in the corner,” he says. “If something isn’t working, they’re going to change it, and we need to be ready to be able to accommodate that. We designed this cloud system. It need to be efficient to render, easy to work with, and we repositioned clouds. Systems were implemented in a way that we could just re-run them if we needed to without having to be too panicked.”

In the end it’s all about keeping the attention of the audience. “You’re hoping that you’re serving the story, and that what you’re creating doesn’t pull them out of it.”