Halon Turns Around Rapid Previs Sequence for ‘The Great Wall’ 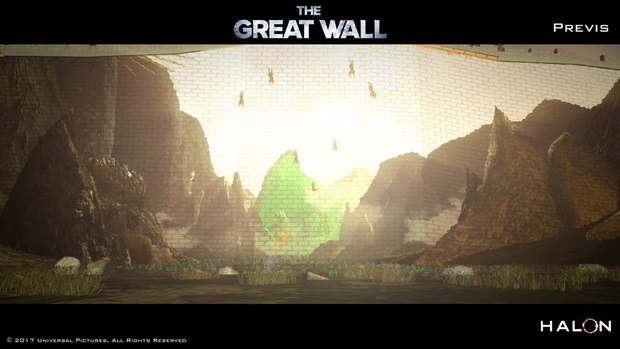 The film, which premiered in December in China followed by wide release in the U.S. on February 17, tells the story of European mercenaries searching for black powder who become embroiled in the defence of the Great Wall of China against a horde of monstrous creatures.

Halon previs supervisor Clint Reagan explained that he had worked with producer Bennett Walsh several times before. “Bennett called us up as he was starting to get involved with this project. He was trying to talk them into using previs, something that Zhang had never encountered before,” says Reagan. “He told us that we’ve got to impress him. ‘We really want them to use previs and we need to show him what it can do for him.’”

But here’s the catch: After an initial meeting with Yimou with producer and Legendary East CEO Peter Loehr serving as translator, Reagan and his team of five artists at Halon had just two weeks to complete a three minute animated segment that would be good enough to impress the director.

“There were no boards and at that point there was only a handful of concept art that had been done under Zhang’s direction,” says Reagan. “So we were just going off of those concept images. With that, I had two weeks to turn around something that would convince him and suggest to him that he would benefit from using previs. No pressure at all.” Reagan explained that he had just one day to get himself organized before assembling his team. “I didn’t want to just do a shot or two. I really wanted to tell him that this is a story telling and visual tool,” says Reagan. “With two weeks that’s quite challenging, that’s usually how much time we give ourselves to build assets for projects, much less get an actual story told in any way that feels impressive or interesting.”

Reagan explained that he started by building an edit just with text cards in Adobe Premiere, “So that I would never be at a loss for what’s asked for, because there was no board and they have nothing to go on except for what I pulled from the meeting verbally.”

Meeting the deadline required the team to work simultaneously, with each artist focused on his or her own area. “I had to manage them and make sure each was progressing in their sphere even though typically they would be waiting for assets,” explains Reagan. “I had to have them animating on an asset that was not done. So in many cases I had some of my animators animating just skeletons because we were still trying to get geometry that would represent the creatures, or the warriors, or whatever it is we were working with. That was quite a challenge but it was fun. I like those kind of challenges.”

“Each artist was working on a very specific area,” Reagan continues. “One was doing the wall, I was doing the rigging for the creatures... I had other artists just working on creature cycles and others working on the jumping sky warriors.”

Reagan explained that the company’s sequence built up to a climax where the Great Wall transforms into a gold plated mirror that reflects the rising sun into the creatures eyes, blinding them so that the attacking warriors have an advantage. “That was kind of the pinnacle of the scene where the creatures were marching out of the hills,” says Reagan. “Another artist was working on the flow of creatures across the plane. They got to the wall just as the wall turned to gold and the morning sun reflected and all the warriors used the backs of their shields to reflect sunlight into their eyes and draw them in and then blast them.”

Reagan explained that the team relied on Autodesk’s Maya for the animation with an in-house rigging system that enabled them to tap into their library of characters from previous films, including some library quadruped monsters. “So we pulled those assets and repurposed them to our new rigging tool and got them going fairly quickly,” says Reagan.

According to Reagan, at the end of the first we week they actually had a rough sequence that they were able to show to Yimou to get feedback. “We got feedback and refocused in an area that he was liking more and we continued the next week and turned in a product that I was really happy with. It ended up looking great at the end of two weeks.”

“Sometimes things come together and sometimes they don’t,” he said. “This one really just flowed and worked really well despite how little we had to start with.”