The Grotesque Beauty of ‘Guillermo del Toro’s Cabinet of Curiosities’

VFX Supervisor Dennis Berardi dishes on the show’s signature production of ghouls, critters, an octopus, a blob monster, a six-foot long queen rat, and a lady made out of beauty lotion – 2,000 visual effects shots all totaled - in the horror anthology series now streaming on Netflix. 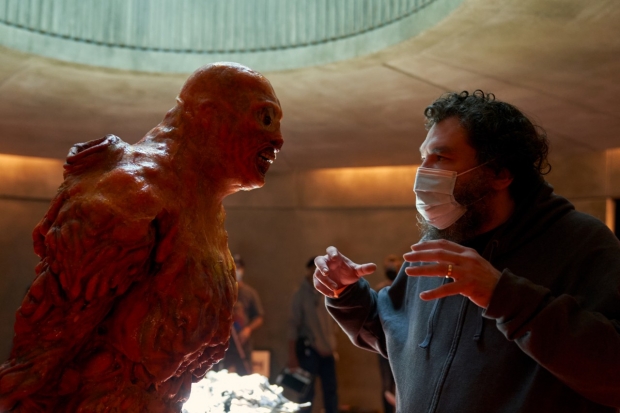 Following in the footsteps of Alfred Hitchcock, Guillermo del Toro hosts and curates the Netflix horror anthology series, Guillermo del Toro’s Cabinet of Curiosities, a creepy, sometimes grotesque, and always interestingly designed mixture of his original ideas and short stories from H.P. Lovecraft, Michael Shea, Henry Kuttner, as well as a webcomic by Emily Carroll. To produce the anthology, del Toro partnered with co-showrunner J. Miles Dale along with an eclectic group of directors that includes Guillermo Navarro, Vincenzo Natali, and Catherine Hardwicke.

The project marks the debut of Herne Hill Media, founded by Dennis Berardi, a frequent del Toro collaborator who has served as the visual effects supervisor on Crimson Peak, The Shape of Water, The Strain, and Nightmare Alley. “The key to something like this was to embrace the fun of it.” Berardi says. “Eight different directors, an anthology curated by Guillermo, and released as a leadup to Halloween.  We’re doing creatures and telling fairly heightened genre level stories including Lovecraftian type stuff.  You have to let it wash over you, do some great animation takes, present ideas, adjust, keep doing it and understand that it’s a marathon, not a sprint.” “I set Herne Hill up primarily to do Cabinet of Curiosities,” Berardi continues. “Now it’s taking on its own life and we’re over 100 artists. We have a few projects on the go [such as Desert Warrior and In the Lost Lands].  But it was nice because I developed a bespoke team just for Cabinet of Curiosities.”

As one would guess, creatures are a staple of del Toro’s storytelling. According to Berardi, “We knew from the start that we were going to do a lot of creatures and developed a creature-centric pipeline. We wanted to employ Unreal Engine for certain elements, to be in Maya for character animation, to be in Nuke for compositing, Houdini for some effects, and we had a fair number of matte paintings.  There was a groom component to some of these creatures. After I had visibility on all of the scripts, I went through my process of determining the key assets and started building a team that would check the boxes accordingly.” Each of the eight episodes were treated as a mini-movie with ‘Pickman’s Model’ running 70 minutes.  “These weren’t typical episodes where you could design something once and use it 10 times,’ notes Berardi.  “Everything had to be done as if it was an original film from start to finish.”  2,000 visual effects shots were created with Herne Hill Media being responsible for half of them; Mark Hammond served as internal supervisor.

Herne Hill designed the key tentpole shots and workflow for every episode. “We were onset for the whole time and then the vendors came in and worked for us,” say Berardi. “We had some great firepower and partners with Folks VFX, Mr. X/MPC, MARZ and WeFX.  All of the companies that we employed were Toronto based. We did have Hotspring help us with some compositing work, roto prep and match moving.”

Diversity was not an issue with the creatures.  “We had ghouls, critters, an octopus, a blob monster, a queen rat that is six feet long and 300 pounds, and a lady made out of beauty lotion,” recalls Berardi.  “It was the reason I was attracted to Cabinet of Curiosities in the first place and thought it would be a great inaugural project for Herne Hill because we’re trying to set ourselves up as a digital art department creature shop first and visual effects company second.  The creatures were the highlight. My favourites are probably the ones that we developed for ‘The Viewing,’ which is the blob monster, Keziah Mason, the witch in ‘Dreams in the Witch House,’ and the ghoul in ‘Pickman’s Model.’ Regarding del Toro’s collaboration with creature concept designer Guy Davis, Berardi explains, “Once we had Guy’s creature sketches, we took them into 3D, brought them to life and showed animation tests. Once you put something in 3D and start moving it around the design evolves.  In ‘Graveyard Rats’ we did have an animatronic queen rat. She mostly got replaced digitally but was great for a stand-in object and something for Vincenzo Natali to frame up to and the actors to react to.  For ‘The Outside,’ which is Ana Lily Amirpour’s episode with the lotion lady, that was a woman in a suit covered in lotion. We had a digital version of her as well and we mixed and matched.  In the case of the ghoul in ‘Pickman’s Model,’ we built a half scale puppet and animated it with rods onset.  In the end it was mostly digital but it was great to have that puppet onset for lighting and performance reference.”

One of the most difficult creatures to execute was the blob monster in ‘The Viewing,’ directed by Panos Cosmatos. “When the blob comes out of the meteorite, it’s all digital and forms into this monster,” Berardi shares. “Once formed into the creature, it’s a guy in a suit that is enhanced digitally with tentacles and goo dripping on him.  We did a little bit of face replacement but did have a performative actor in the shots which was fantastic.  In my opinion its harder with something that is not so anthropomorphic, meaning that it doesn’t display many human qualities like in the case of the rats or the wraith in ‘Lot 36.’  In the case of the wraith there were no eyes, and the emotional performance is all in the eyes.  The good thing on that one was that the creature was one note. It just needed to scare, envelop, and eat. Emoting is the function of the primary animation in terms of the physical silhouettes, blocking, and how it all comes together editorially.” Blood and gore were not treated gratuitously. “The odd time, like in the case of Panos for ‘The Viewing,’ we could go rogue and he [del Toro] embraced it,” states Berardi.  “But for the most part you want to be in context, earn the visual effect authentically, meaning it has to be story driven and you want to be in the context of edit so the action, tempo, colors, and textures don’t come out of nowhere. We want to be fully integrated, otherwise you get the bad CGI moniker and to me bad CGI is a shot that comes out of nowhere that doesn’t cut well, is not well lit and integrated, and hasn’t been earned in terms of the story.  In the case of ‘The Murmuring,’ the episode directed by Jennifer Kent, two ornithologists are suffering a great loss in the death of their child and go on a research trip. In the end sequence, when the murmuration of birds washes over her, I feel that we earned that moment.  We had something like 10,000 digital birds that we had animated coming through the frame and did a flocking system.  When we presented that to Jennifer, she literally cried and that to me is a successful visual effect when you are part of the emotional storytelling.”