Whether its dramatic water splashes, dino drool, or bioluminescent beasts, DreamWorks Animation and Netflix’s adventure series, nominated for a Best FX for TV/Media Annie Award, strives for realistic visual effects that push the story forward through color and lighting. 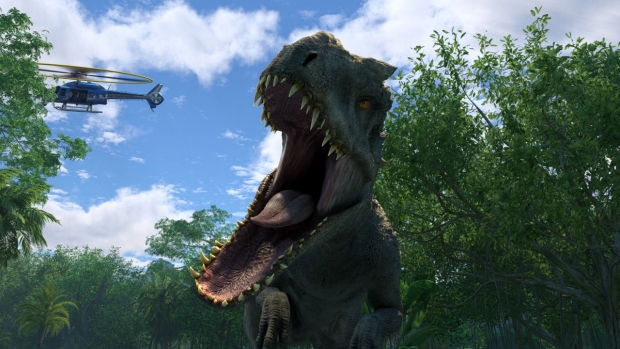 For visual effects artist Kathy D. Tran, FX is like a dessert.

“It’s the grand finishing course,” she explains. “When you look at a shot, the animation, textures, and lighting can all be amazing, but once you add in the final touch of FX, it really brings everything together.”

Most recently, Tran has served as the lighting and compositing supervisor on Universal Studios and DreamWorks Animation’s Jurassic World: Camp Cretaceous; the first and second seasons are now streaming on Netflix, with a third installment coming in May.

“Our show would not be Jurassic without the dramatic water splashes, dust hits, environment destruction, and best of all, terrifying dinosaur spittle,” Tran continues. “And this is the first time at the studio where we pushed for a more realistic style for FX.”

The series, created by Zack Stentz, follows the thrilling and terrifying adventures of a group of kids who come to the island of Nublar for an adventure camp. Like all Jurassic Park stories, things inevitably go haywire, and dinosaurs begin to do what they do best: elicit fear and destruction for anything, and anyone, in their path. The kids - from all different backgrounds and with no adult supervision - must band together to survive amidst an onslaught of prehistoric predators. The first season’s sixth episode, “Welcome to Jurassic World,” was nominated an Annie Award for Best FX for TV/Media.

Animated by DreamWorks Animation and CGCG Inc., known for their work on Star Wars: The Clone Wars, Tales of Arcadia, How to Train Your Dragon: Race to the Edge and more, this episode also happens to be Tran’s favorite that she’s worked on in the series. “This is when the kids discover the bioluminescent cave,” she says. “This is my favorite because it took a great deal of teamwork to create these shots. It was very involved from beginning to end because of all the detailed work that was put into the scene. There are so many surreal elements to this sequence that you can’t experience in any other series: purple algae glowing along the cave walls, a mystical waterfall, and best of all - bioluminescent dinosaurs.”

Tran, who worked on Reel FX and Twentieth Century Fox’s animated feature The Book of Life before signing onto Camp Cretaceous, was primarily responsible for making sure lighting and FX stayed within parameters while also figuring out how to “push the quality to a higher caliber.”

Because of its bright, high-contrast visuals, “Welcome to Jurassic World” was a prime example of the production team’s mandate: telling the story through color and lighting.

“We wanted to really emphasize visual storytelling,” Tran explains. “If you lay out every episode for the first season, you’ll notice a variety in the color palette for lighting. The first few episodes start off with a light-hearted and whimsical color range and it slowly transitions to moodier lighting once tragedy hits the island.” Working closely with showrunners Scott Kreamer and Aaron Hammersley, art directors John-Paul Balmet and Christophe Vacher, as well as animation director Dan Godinez to depict the mood of each episode, Tran says the team was given extremely detailed art to work from.

“The art and design department spent long hours and deep research on how the environment, textures, color, and mood for every asset, set, and scene should feel,” remembers Tran. “We have libraries full of these on the server that include color scripts, movie references, even Google images. These references really helped us visualize the show’s style.”

She adds, “For Camp Cretaceous specifically, if you really look at the environment, you will notice the subtlety of grass and dirt kicked up from dinosaurs as they run through the jungle. There’s dappled lighting - shadow patterns from the leaves - interacting on the characters. And if you look closely enough, you can visually see faint sun rays flickering through the trees in the background.”

Though this created wildly realistic and stunning animation, the strong emphasis on detail also posed challenges. “Environment interaction was one of the huge challenges we faced on the show and, due to the limitations of a TV schedule, we had to really think outside the box on how to keep the quality high while being efficient with our approach to FX,” Tran reveals. “The show has a cap on simulation work, and it was not ideal for every shot to have dynamic tree and foliage movements.” Tran also says that when it came to the water splashes in the sixth episode, “the challenge was real. “We maxed out the server space to the point where production had to stop just to archive files. Our renderfarm would fail due to overuse. Did I also mention we share the renderfarm with other shows at DWTV? We hogged the farm so much that other shows - like our friends from Fast & Furious - would tell us to share nodes. A group from Fast & Furious actually came to our pod just to see what this “Waterfall” looks like because it was sitting on the farm for so long.”

The team then faced the uncertainty of the pandemic: quarantine and working from home. “Honestly, that was a frightening moment,” Tran recalls. “We did not think we could complete the episode, or any other episodes, for that matter, on time.”

Luckily, FX leads Chris Wombold and Emad Khalili were able to brainstorm efficient solutions. “Chris created looping animated tree caches. This Tree Loop tool he designed was extremely quick and easy to use and really helped bring life to the jungle while saving time for artists during shot work. For dynamic and custom FX shots - like the water splash in “Welcome to Jurassic World” - Emad created setups in Houdini that helped streamlined high-quality FX work in a tight deadline.”

Despite the amount of hard labor and problem solving that goes into creating such CG-animated works of art, FX work often fades into the background, its realism almost aiding in its disappearance and lack of recognition. “What I would suggest is for viewers to train their eyes to focus on the background and ambiance of the shot,” says Tran. “Don’t even be afraid to look at the character’s feet. It’s natural to look at someone when they are speaking or seeing something in action, but you’ll notice so many more different elements within the shot when you don’t focus on the acting.”

She adds, “The perseverance behind this show and the realism of our FX definitely sets us apart from other animated series. We finished the episode with pristine quality, and I couldn’t be prouder of my team, our partner studios (CGCG) and the amazing AT department that pretty much saved the entire studio from a standstill.”

Choc Chip Animation Riffs on Pop Culture in ‘The Art of Murder’
F is for Flake: The (Not So) Great Animation Robbery?
Re-VIEW: ‘Avatar: The Way of Water’ – A Miraculous Vision
‘Kung Fu Panda: The Dragon Knight’ Celebrates a Special Lunar New Year
END_OF_DOCUMENT_TOKEN_TO_BE_REPLACED