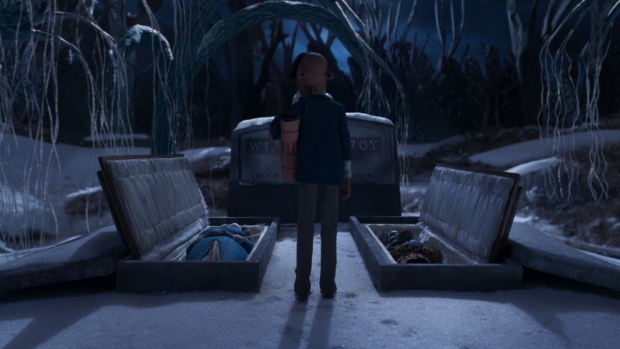 Henry Selick and Netflix’s Oscar-longlisted stop-motion animated feature, Wendell & Wild stars Keegan Michael Key and co-writer and producer Jordon Peele as the titular demon characters who enlist the help of 13-year-old Kat Elliot – through trickery of course - to summon them to the Land of the Living and escape the mundane drudgery of their underworld existence.

The film took about eight years to make, with FuseFX coming in at the tail end, beginning in January 2022. The team delivered their final shots in July, with work split between the studio’s Los Angeles and Vancouver offices. The creative team consisted of about 80 people, including artists and production. The LA office mostly handled work on the cemetery, while Vancouver oversaw the character Belzer. In all, the team delivered about a dozen sequences with approximately 275-300 shots. FuseFX built out and assembled the Rust Bank Cemetery and the Underworld, which included extrapolating and reconciling CG with the various physical sets. Santagada explained that building up the physical sets for larger vistas was impractical, so his team set about “…filling in the night skies, integrating various plate elements, performance passes, secondary bits or animation, and a bunch of fluid, smoke, breaths, and bubbles.”

He added, “Oh, and a ton of rig removal! Lots of winders and external armatures on this project, but the extra work to take them out is worth it. It allows for a ton of control and very bold, expressive motion.” On the cemetery sequences, aside from the plates, which had built and lit set environments to work from, the team relied on the mountains of provided reference.

“We had everything you could ever want, from concept art to, I guess, you could call concept maps… sky key art per scene, scans of trees, gravestones, cliff scans, HDRs, turntable references of all sorts of set designs,” noted Santagada. “The visual effects team on the production side had a whole virtual library of elements and set photography to draw off of that was shipped over with the plates.”

The team used that reference to capture the look and feel established by the art department.

“There were full cemeteries at smaller scales but figuring out how the Lego pieces of the full puppet-world-sized stages all fit together with our CG extensions was a challenge,” Santagada continued. “The maps were still evolving as we worked, as blocking from a scene that was still shooting at the time needed to inform the work.” “One of our favorite bits of reference was from an animation test that was trying to see if it would be feasible to do the Father Bests pond water vomit gag practically,” he shared. “These cool, bendy, drippy acrylic tubes were made that really looked like moving water arcs when twirled.”

Because of scheduling, Santagada says there wasn’t enough time to handle the integration and interaction practically, so they proceeded to replicate the effect. “We found that when your brain sees moving water, it really, really wants to see motion blur. So, the fluid sims here and at the Scream Faire are some of the very few stylized instances of motion blur used in the picture.”

“There are some interesting considerations to make when working on a stop-motion project that makes liberal use of deep focus,” added Santagada. “Henry and the team wanted to ensure the animation was always the main focus of attention. Here we often see out to the tree line, the rock outcropping, or the fair chamber wall, as the case may be. In live-action, shallow focus can help draw attention, but that tool has been sacrificed here.”

The set is increasingly simplified the further it gets from the action, becoming more expressionistic and less literal. According to Santagada, that simplification draws the eye back to the action on film - a consideration that informed the assembly of the various extensions and environments. The team faced multiple challenges, such as being unable to stand over the actual physical sets of models to figure out precise placement, exacerbated by the verticality of some parts of the cemetery.

“About a year earlier, for a different project, I had some similar questions about verticality at a location during the lockdown,” shared Santagada. “So, I bashed together some rough photogrammetry and elevations done by the art department. This was similar enough to a situation that might at least inform some of our decision-making. So, we took all our best guesses between maps, built set scans, and a little fudging into a full-scale game-engine style walkthrough and started wandering around in first-person on a zoom call asking everyone questions. And it worked great!”

Landmarks helped establish the feeling of spatial consistency even though it was to puppet scale, with different sections of animation tables on various stages.

“Going into the project, I anticipated some challenges in achieving a look and feel with our elements, but I was totally wrong,” said Santagada. “The stylization of this world is so rich and clear that the answer to any given creative question is often present elsewhere in the shot or sequence.” According to Santagada, the bigger headaches were more technical details such as scheduling, managing numerous plates and passes, and keeping the headings right on the hand-painted skydomes.

“There was one interesting aspect that wasn't a challenge per se but was a novel thing for me on this project that I found really interesting,” he added. “Henry and the team really wanted to embrace the handmade nature of the work, so some part of your brain knows, while watching, that people made this with their hands. Some of these artifacts, rogue hair movements, noise in scattered snow popping around frame to frame, and specks of dust here and there… gives the piece life. We wanted to leave it in as part of the movie's charm. But sometimes there would be too much charm! Sometimes some sort of glitch or blip would be a little too distracting and would be smoothed out. It was a neat exercise to ensure that even the imperfections were just right.”

“The amount of craft on display in this movie is just amazing,” Santagada says. “We would see these shots hundreds, if not thousands, of times in our relatively short time on the show. And we would still find more things to marvel at in terms of performance, design, camerawork, secondary animation, and everything. I’m really proud of the rich, beautiful, spooky work our team did, and I’m so glad we got to contribute to such an achievement. With any luck, what we put in may help inspire another generation of artists and animators the same way some of Henry’s earlier outings did for us.”