FuseFX Goes Inside a Post-Civil War Manhattan in ‘DMZ’ 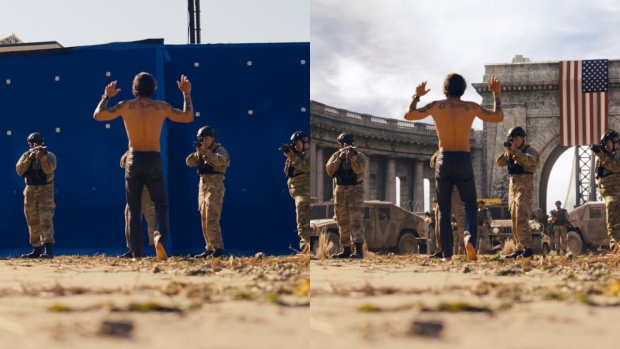 With the Capital Hill rioters continuing to make international headlines as an exclamation point to the galvanizing presidential reign of Donald Trump, the idea of a second American Civil War is not far fetched, However, long before these events of January 6 took place, in 2005, Brian Wood created the Vertigo comic book series “DMZ,” where the Free States of America attempt to secede from the United States, and the island of Manhattan becomes a demilitarized zone.  The dystopian story has been adapted by Roberto Patino (Cut Bank) into a four-episode miniseries, now streaming on HBO Max, starring Rosario Dawson, Hoon Lee, Freddy Miyares, Jordan Preston Carter, Venus Ariel, Amandla Jahava and Benjamin Bratt as well as the directorial talents of Ava DuVernay (Selma) and Ernest Dickerson (The Wire).

Tasked with transforming Atlanta into New York City was FuseFX, lead by VFX supervisor Brian Kubovcik, who had to recreate iconic landmarks such as Chinatown and Manhattan Bridge along with escaped zoo animals and nature laying claim to the devastated urban environment eight years after the conflict. It total FuseFX created 350-400 shots with reality being the cornerstone of the world building.  “There is never a catchall solution because once you see the existing CG asset of New York City in frame, you’ll go, ‘This building needs to go while that one we want to see more of,’” notes Brian Kubovcik.  “There are lots of different variables.” Minimal plate photography was taken of New York City.  “We LiDAR scanned Atlanta as our base and had existing assets of New York City that were true to real life as much as it can be because that city is always changing,” the VFX supervisor adds. “For the Cloisters, we able to shoot some plate photography, but that was the only location.  Manhattan Bridge and Chinatown were all CG because it was the most flexible option.”

In the show, certain areas of the DMZ were more devastated than others. “The production shot buildings in Atlanta that lent to this abandoned, worn look for the world,” states Kubovcik. “So there were a lot of set extensions and whatever we had to do to the deeper buildings to tell the story of that post-apocalyptic world. That was straightforward to get into because it was on a scene basis.  We decided how much we had to ‘DMZ-ify’ existing buildings in downtown Atlanta that were too clean. It was all to taste. How much do you push until it starts to look unreal because the story takes place over the course of eight years; there is the war and then the overgrowth when nature takes over.  We had two different things to build up a world in scope. Showrunner Roberto Patino had a clear vision of what he would like to see within a given shot and what the story was about.  What is Alma Ortega [Rosario Dawson] discovering when she gets out of this underground world? Roberto is also familiar with the city, so we had a shorthand between us.” FuseFX’s team created atmospherics for the pilot to show burning fires in the flyover shot during the evacuation sequence. According to Kubovcik, “The explosion that happens near Alma and her son was revisited throughout post. The challenge was selling the explosion within a tight space coming from a jet.  What does that look like? You have to walk that fine line of the truth in real life of decimating an entire block versus our story truth which is she has to survived but also feel in peril.”

Fortunately, the largest crowd scene was not impacted by the pandemic.  “The evacuation scene was shot just before the world shutdown in 2020, so were able to get 300 extras,” reveals Kubovcik.  “For the big helicopter shot we did some significant digital double work to extend out, but that would have been the case anyway pre-pandemic. The remaining three episodes were dependent on the pilot helmed by Ava DuVernay getting picked up by HBO Max.  The pilot was shot in 2020 and we resumed in July 2021 with Episodes 102, 103 and 104 directed by Ernest Dickerson.  DMZ wasn’t a tight episodic until Episode 104, but we had a good amount of runway on Episodes 102 and 103.” Matthew Lloyd (Spider-Man: Far From Home) was the sole cinematographer for the miniseries. “Matt has a distinctive style,” Kubovcik shares. “The lenses gave off a lot of flares, so we found ourselves creating flares in certain areas and rebuilding to make sure that we blended with the plate photography. Ernest had his vision for what he wanted the scene to end up like. I could propose solutions and he would always come back with solid ideas. The same goes for Ava.”

In addition to directing, Dickerson also storyboarded Episodes 102, 103, and 104.  “Each day we had a good idea of what needed to be accomplished based his boards,” recalls Kubovcik.  “In terms of previs, there was a good deal of concept art that FuseFX and the art department did for the pilot that spoke to what the world should be; that gave us a rough way to get at what the heart of the visual storytelling process would be.  There wasn’t a ton of postvis that happened.  It was almost direct to shot work especially given the tighter window on Episode 104.  We got our existing assets in from different episodes and worked getting those refined to what the world looked like eight years later. It was all discovery within the moment.” Building one world was the most straightforward solution for the construction of the Manhattan Bridge and Chinatown. “We would figure out where the camera would be in that space and render from there,” states Kubovcik.  “Manhattan Bridge was a scan that we did based on plate photography. We didn’t have revisit it until Episode 104, so we had lead time [for the eight year later version] which had a worn door look.  Over that period of time, Manhattan Bridge had become a checkpoint for the United States military that was not dissimilar from the Berlin Wall.  In the case of Chinatown, we only saw it after the evacuation.  Chinatown has walled itself off and is one of the few places left in the city that still has ongoing power by having their own power grid.  It didn’t need to be postapocalyptic world.”

In the series, Chinatown has distinguishable traits such as Division Street. “The biggest things were signage and string lightings,” say Kubovcik. “The string lights aren’t necessarily something that you’ll see in [actual] Chinatown but they helped to lend an interesting visual storytelling language to those scenes. We took the best parts of the real world and put them in. One of those is Manhattan Bridge and the other is the view of One World Trade Center.”

One key scene in the pilot that helped sell the portrayal of New York City was Parco Delgado’s (Benjamin Bratt) speech at Bethesda Fountain in Central Park.  “A stand-in for the fountain that he gets up on was built practically,” Kubovcik reveals. “From there we built out the trees, walkway, and steps that were in that portion of Central Park.  It was important to get those right.  We scanned that as well and did some plate photography.” Other scenes show The Free States of America’s presence in New York City.”  If you look at the Cloisters in Episode 102, there is DMP boat work,” Kubovcik describes. “Essentially, the FSA has a flotilla that is a barricade on the Hudson River.  We had existing boat assets and altered them to show their attached gun turrets.  Fun things that we threw in were a repurposed State Island ferry. In our work, that’s where you see the FSA the most.”

Taking an Old-School VFX Approach in ‘All Quiet on the Western Front’
‘Natural Habitat Shorts’: Like ‘Ranger Rick,’ But for Adults
Framestore Sets Sail on ‘1899’ with New Virtual Production Tools
Animated Characters: The Art of Babbitt – Part 1
Bruce Smith and Ralph Farquhar Talk ‘The Proud Family: Louder and Prouder’ Season 2
VFX is the ‘Thing’ for Tom Turnbull on Tim Burton’s ‘Wednesday’
We Need to Chat
F is for Flake: The (Not So) Great Animation Robbery?
END_OF_DOCUMENT_TOKEN_TO_BE_REPLACED