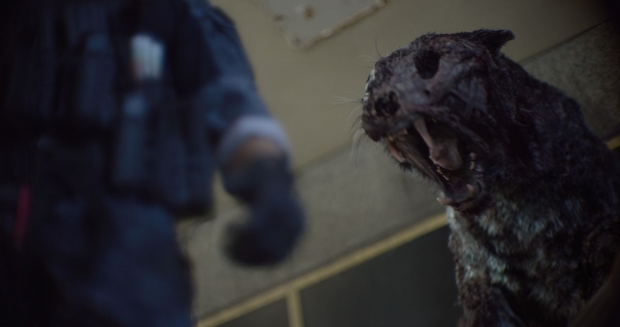 In Zack Snyder and Netflix’s post-apocalyptic action-adventure, Army of the Dead, following a zombie outbreak in Las Vegas, a group of mercenaries tries to venture into the quarantine zone to pull off a $200 million heist. Gory mayhem ensues. Talk amongst yourselves.

Led by VFX supervisors Robert Winter and Joao Sita, along with animation supervisor Hennadii Prykhodko, all based out of Framestore’s Montreal office, the studio handled a wide variety of visual effects on the film; their work ranged from early concept art development to final VFX on 500+ shots, including the ferocious undead tiger, “Valentine,” zombie hordes, and a post-apocalyptic Las Vegas. And lots of previously mentioned gore. And mayhem.

Working closely with the director, Winter supervised the creation and integration of the zombie tiger, zombie hordes and crowd, destruction of Las Vegas, digital stunt doubles of the main cast, blood and gore, the helicopter chase, and nuclear explosion. Say that three times fast! Sita oversaw the Tig Notaro replacement shots and additional sequences added when the actor joined the film, as well as the creation of her digital asset and integration of her greenscreen material into the principal photography shoot. According to Winter, “We worked from a concept of a destroyed Tropicana Boulevard provided by the filmmakers. We created concepts for the other locations along the Las Vegas strip, as well as finalized the design of the Olympus hotel, which is one of the fictional hotels in the story. We also created the final concept for Valentine's design, adding the finishing details of the decay, dirt, and blood you see in the film.”

“For the Tig Notaro shoot, we provided camera diagrams to assist the filmmakers in matching the same camera angles,” he adds.

As far as the film’s copious number of human flesh eaters, Framestore created a digital zombie horde to populate the massive numbers needed in the wide shots, extending those numbers with zombie performers. “The filmmakers took advantage of the variety of characters found in Las Vegas,” Winter says. “We built a modular system with a wide variety of wardrobe items and creature makeup to match the live performers. In the title sequence, when the military bombed the strip, the horde was put through an explosion simulation, which resulted in the carnage of thousands of CG zombies. Too much fun!”

Who would have guessed that Carole Baskin's animal sanctuary from Tiger King: Murder, Mayhem and Madness gets a shout out. “Our CG zombie tiger was initially based on a reference tiger named Sapphire who lived at the Big Cat Rescue in Florida,” Winter explains. “We built the non-zombie version of the tiger first. This allowed us to have a physically accurate anatomy to start animation.  Once Zack approved the final Valentine concept art, we incorporated the zombie characteristics.  We began with peeling away the layers of skin and muscle to reveal internal anatomy like bone and tendons. Our animation and creature FX teams added skin sliding, fur dynamics, and muscle giggle for realistic motion of her exposed anatomy. Adding dry blood, dirt clumps, and decayed anatomy was the final step to give Valentine the same patina as the rest of the world created for Army of the Dead.” Winter’s team also created a huge array of gore elements, from the hundreds of blood splatters and head shots to a full body zombie decimation. “We destroyed three key zombie heads,” he notes. "One done by the jaws of the zombie tiger, another by a bullet in slow motion, and the last with a fall from a tall building. We also ripped a spine out of a skull, tore a jaw off a face, and popped a zombie between two heavy doors. It was a smorgasbord of FX gore. Our team of talented FX animators did a fantastic job grossing us out day-after-day in reviews.”

Because the story takes place in a destroyed Las Vegas, creating a digital version of that world was one of project’s most ambitious efforts. “We spent two weeks in Las Vegas photographing and scanning the strip,” Winter reveals. “This became the foundation for building our version of Las Vegas. The scale of the strip is massive. Each property covers a massive area. We wanted the audience to feel that expanse, so we built our Las Vegas to scale with an accurate layout of all the structures along the strip. We only deviated from the real Las Vegas by adding the two fictional hotels: the Olympus and the Bly, which are unique to the AOTD world. Great care and artistry went into the added destruction, debris, and texture to create the final look of the Las Vegas you see in the film.” Another big challenge was inserting actor Tig Notaro into the film, after principal shooting had completed, replacing Chris D'Elia, the actor originally cast as the helicopter pilot who was cut from the film due to sexual misconduct allegations. “Late in our production schedule, the filmmakers decided to replace the actor playing the role of the pilot,” Winter says. “It was a team effort. We supplied technical diagrams of camera positions to enable them to recreate the same camera views when shooting elements of the new actor.  We built a digital version of Tig Notaro that was animated and placed in shots that could not be achieved live. Because we’d become intensely familiar with the look of the lens Zack used to shoot the film, we had very elaborate lensing templates unique to each lens. These were used to integrate the Tig Notaro elements into existing shots.”

“Having to replace an actor entirely in a movie was new to the company and rather gratifying to be part of it, as the movie gained more personality and ‘punch’ with Tig’s addition,” Sita adds. “The expertise from Framestore of building digital realistic characters and integrating it seamlessly came into play and proved to be fundamental in this work.”

Winters concludes by noting that they were already in post-production when the pandemic started, so after a short adjustment period shifting to working from home, they were pretty much back at work full steam. “I had to return to the office one day a week to review our final work in a theater,” he says. “It was very lonely sitting by myself in a dark room staring at shots of zombies. Not that I was scared or anything!”