Framestore Reunites with James Gunn on ‘Guardians of the Galaxy Vol. 2’

Framestore collaborates with VFX supervisor Christopher Townsend to deliver more than 620 shots ranging from creature work, spaceships, ‘the best opening sequence in the world’ and an exhilarating space chase across the Galaxies. 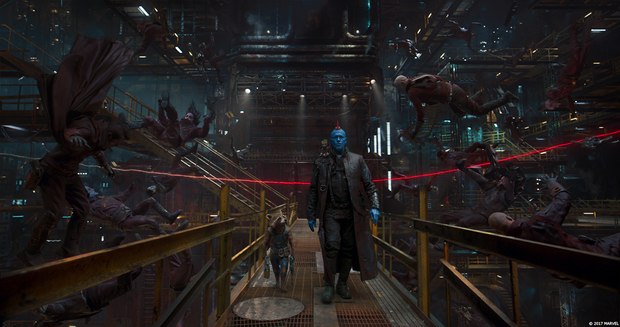 Rocket returned home to Framestore, where the team created the look and led the animation on the wise-cracking Raccoon and that of his new sidekick: the adorable, scene-stealing Baby Groot. Happy to be back in Gunn’s wacky universe, Framestore collaborated with VFX Supervisor Christopher Townsend to deliver over 620 shots ranging from creature work, spaceships, “the best opening sequence in the world” (as dictated in the script) and an exhilarating space chase across the Galaxies.

“What we’ve achieved is something totally unique,” says Framestore VFX supervisor Jonathan Fawkner. “That is because the mind of James Gunn is a very unique place; but also the demands of the work pushed our team to create the impossible.” Rocket was a chance for Framestore to revisit some creative and memorable animation work. “We went back and looked at face shapes, the construction of his skeleton, all the time knowing that we needed to end up with the same Rocket essentially,” Fawkner says. “Updating everything but keeping the character that is so loved.”

Again using Bradley Cooper’s performance as reference, the team captured his lip movements to achieve a seemingly natural dialogue delivery. They also looked to the live-action characters in the scene to create Rocket-appropriate responses, without seeming too exaggerated. “We wanted to create a really strong and consistent performance,” animation supervisor Arslan Elver explains. “We knew the performance and had solid reference, so we could get started right away!”

Rocket was treated to a makeover, with an updated fur simulation using Framestore’s proprietary tool fcHairFilters to create a photorealistic finish. I am (Baby) Groot “We couldn’t make him too ‘human,’ Elver says. “On the other hand he couldn’t be too cartoony. He had to look real, but cute.”

Framestore was lucky to be able to start work on Baby Groot’s animation from the beginning, having worked extensively on the Comic-Con trailer. Reincarnated from the ashes of adult Groot in the first movie, Baby Groot was a challenge for the team, who had to question how young he would actually appear, how he would integrate with the rest of the gang, and how much range he would have. The process was lengthy: “We went back and looked at Groot in the first movie, at his personality and character,” Elver recounts. “We took his name literally and kept playing around with the idea of him being a baby. After a couple of tests, it became clear that he had to have a bigger capacity than that. He is still young but he is engaged, though easily distracted and at points oblivious to his surroundings.” Baby Groot is made of bark, which couldn’t look too “aged,” and his face is very simplistic in design, which proved problematic when it came to rigging. “We created an expressive stretchy base deformation that kept simple silhouettes for his facial expressions, then added a layer of ‘crust’ deformation which we were able to paint and tune to create ‘crust islands,’ or patches of rigid bark,” explains Laurie Brugger, Head of Rigging. “These patches were selectively shrink-wrapped back onto the base to keep the simple forms of the face whilst maintaining the feeling of bark.”

Groot also has vines generating from his hands, allowing him to get up to mischief. Gunn loved the test which saw the vines grow out from his hands and snap, which led to a collaboration between CFX and Animation to come up with the right look and movement. Taking on the opening sequence of the film was a huge task from many perspectives. The entire set was reflective and the camera doesn’t cut, meaning the team was faced with 800 frame-long effects and the need to run simulations that were thousands of frames long.

“The title sequence was an enormous undertaking: one of the most complex I’ve ever experienced in my career,” Elver comments. The team created a bespoke stormy sky for the sequence. “Because the camera doesn’t cut, we couldn’t go and find plate material that would work for a camera that was continuous. So we re-developed a brand new suite of tools for generating cloud scapes, and having them move realistically,” says Fawkner. The clouds move in a time-lapse, alongside bolts of lightning that needed to react within the clouds and light the city below. The city itself is made of gold, which posed its own problems as it needed to reflect on everything and everyone in the scene.

Prevised by The Third Floor London, the scene features the eight-tentacled, semi-translucent “Abilisk.” The team needed to convey the weight of the creature: he is colossal, heavy but also graceful and dynamic, with sophisticated muscle and skin-sliding simulations. The team ingested the camera work into the pipeline, splitting the sequence into 11 pieces and assigning each one to an individual animator, creating a tool that allowed them to sew the shots together seamlessly. The Abilisk also projects deadly “matter waves”: rainbow-colored beams with bands of fibre, which then had to be reflected off the gold city below and bounced back onto all of the creatures.

Ignorant of the impending danger, Baby Groot dances in the foreground; a real delight for the team working on the shots. “When you’re only 10cm tall, and you’re dancing around, you aren’t going to cover much space. We had to come up with a series of clever ideas, hops and cheats to be able to cover the distance without making it obvious to the audience,” Elver says. To carve out his performance, the team reviewed footage of Gunn dancing which they implemented as a foundation. It was a long process of tweaking the camera, animation, tempo and the little beats to keep pushing the comedy and character of Groot.

“It was such an important scene to get right; it has a lot of heart in it, and it meant so much to James Gunn,” Elver comments. Framestore also worked on the action-packed Space Chase sequence, which sees Quill and Rocket hurtling through space in ships animated by the team, dodging asteroids and weaving between blazing ribbons of plasma.

The team wanted to keep control of the ships in animation and define the choreography. The brief for the Milano was also very precise; it had to be very dynamic; darting and dodging as fast as possible.

Hurtling through space, the team had to come up with interesting ways to demonstrate speed. The chase covers three environments, the first made up of a “space grid” in which ribbons of plasma (similar to the rings of Saturn) are used to anchor the characters and provide point of reference. The environments were heavily animated with an array of tricks including Quantum Asteroids, grit and particles, before going through lighting.

For Framestore, Vol.2 has been a truly epic journey. “Myself, Arslan Elver and James Gunn were the only people who had previously worked on the VFX for Guardians, and it was important that we had this bond,” says Fawkner. “Gunn knows exactly what he wants and is very precise. It’s refreshing to work with someone so passionate about the world he’s creating.”