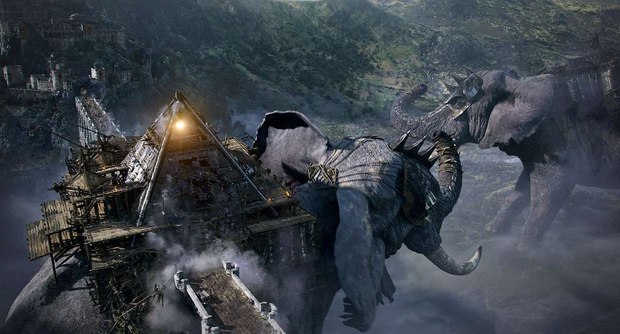 Award-winning VFX house Framestore recently joined the voyage to Medieval England for King Arthur: Legend of the Sword, which reunited the studio with British director Guy Ritchie and his team.

“The team have produced a huge amount of work and it looks absolutely fantastic,” Framestore VFX supervisor Jonathan Fawkner commented.

The film opens with the impressively sprawling Camelot, an almost entirely CG environment. Helicopter plates were shot of Moelwynion, near Mount Snowdon, and coupled with Lidar photo scans of the set. “It’s a fantastic environment,” says Fawkner. “It’s hugely detailed, with a giant valley which the team meticulously recreated.”

As the opening sequence evolved the environment became bigger and its destruction had to be choreographed to the action. “The destruction was a fantastic challenge,” adds Framestore VFX supervisor Christian Kaestner. “I think it brought out the children in a lot of the team -- everyone loves to blow up things, and on this scale it was as much fun as the challenge was big.”

The team approached the castle build in parts, modelling individual sections that could be textured and modified individually, fixing them together later at render stage.

The epic opening scene features 300-foot tall elephants attempting to destroy Camelot. “We inverted an approach that we take when shooting miniatures,” said Kaestner. “We took regular walk cycles, matched them to real elephants, and slowed everything down and refined it from there.”

Ritchie was keen for the elephants to be magical, but also very much grounded in reality. The team took reference from several species of African elephants, though, Kaestner said, “We really wanted them to have character, and Guy requested we add war paint.”

The elephants also held armour and wooden structures on their backs, housing ropes and flags which needed simulation. “It’s very easy to blow the scale of something that big,” added Framestore CG supervisor Stuart Penn. The detail was important; look dev artists developed the patterning of the skin, the texture variation and the ingrained dirt within the folds of skin. A giant serpent is conjured inside the castle, which required some new tool development. “We needed to get the scale right because we see the giant serpent really close-up,” Penn recounted. “We laid out individual scales along the body and then added something we called “snake oil”, which allowed the scales to slide over the skin and each other. As it deforms they’re pinned to part of the skin, but they’ll slide over the other scales.”

The snake was rigged to deform as it came into contact with the ground. “We were looking at different types of snakes and how they move,” Penn continued. “Our snake is huge, but moves so, so fast. The problem was, it had to fit in the Throne Room. It actually wrapped around it twice, so we had to cheat a little to keep it moving and not allow it get in its own way.”

The Nemesis is a completely CG, hand-animated character who battles Arthur (Charlie Humman) in the jaw-dropping finale.

“We built the Nemesis from the inside-out,” Penn explained. “It required high fidelity muscle systems and allowed us to take our muscle pipeline to new levels. This combined with the fiery cape and vari-speeds made it particularly complicated. It was the final act of the movie, so it had to be epic!”

The action is set on a volcanic island, surrounded by water, lava, waves and steam and an enormous FX environment. “The environment itself changed a few times; evolving with the production. Guy wanted to set it in a visually unique world,” Penn noted. Photo scans of real rocks from beaches on the Welsh coast were used to sculpt the Island. Complex simulations were then art-directed on a per shot basis. Framestore’s varied range of work also included the creation of a photo-real eagle, which carries a CG snake to Camelot; the “baby” snake found in the Throne Room; the interiors of the Tower, and its destruction. Working closely with Nick Davis, the team were able to establish a unique look for the show whilst staying firmly balanced between reality and the magical.

“It was a lot of fun -- it was fantastical and magical but in a grounded, gritty way, and we had a lot of creative freedom,” Kaestner concluded.

WetaFX Delivers a Monstrous 3rd Act for ‘Shang-Chi and the Legend of the Ten Rings’
‘The Spine of Night’: Redefining Fantasy and Animated Filmmaking
Luma Pictures is Well Suited to ‘Eternals’ VFX Production
‘The Musician’: Celebrating Human Resilience with Cutout Animation
Plague Diversions: Gazing at the Shortlist for the Best Animated Short Oscar
Producing Animation the Right Way on ‘Ron’s Gone Wrong’
‘Sing 2’: Getting Ready for the Big Time
END_OF_DOCUMENT_TOKEN_TO_BE_REPLACED