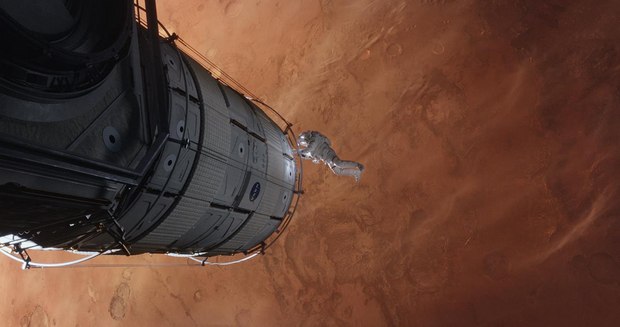 London-based VFX house Framestore was awarded 338 shots on 20th Century Fox’s The Martian, directed by Ridley Scott and starring Matt Damon in the leading actor role. The sequences are truly out-of-this-world, portraying Damon’s character Mark Watney and his fellow astronauts in the outer space environments which have become synonymous with the Framestore name, thanks to 2013’s Oscar-winning Gravity.

Informed by the heavily-researched detail of Andy Weir’s novel, and with significant input from NASA on genuine contemporary technologies, Framestore reveled in the opportunity to further refine the CG and VFX techniques needed to portray a realistic space setting for the year 2035.

The dramatic story and its setting are maximized in native stereo, with images of Mars drawn from vast datasets to create a stunning, high-resolution picture. The build of the Hermes was a major focus for Framestore’s teams. At 225 meters in length, the spaceship is the biggest and most complex created by Framestore to date, and is more than double the size of the current International Space Station (ISS). Early pre-visualization and production design defined its measurements, with consideration for practicalities such as the time it would take the astronauts to move around it, and the space needed to store supplies for a mission as long as Ares III. “Everything we did, we tried to ground in reality,” notes VFX supervisor Chris Lawrence. “It’s sci-fi, but it’s real -- the production design isn’t overtly flashy, and there is minimal design from scratch.”

Details for the build were frequently drawn from existing spacecraft designs. Like the ISS, the enormous Hermes has a modular structure, based on the knowledge that it would theoretically need to be launched in stages, and pieced together in orbit.

The six solar array wings (SAWs) are integral to both the look and design of the Hermes, and were a complicated CG challenge for Framestore’s teams. Made of various layers of materials -- silicone, plastics and metals -- the panels are continuously reflecting and refracting light.

“They contain a lot of layers, and respond differently depending on distance, light, angle,” explains CG supervisor Neil Weatherley. “We had to take a realistic point of view - we’re not used to seeing solar panels in space, and they do look quite strange compared to our earth view. It was a real challenge to replicate something that looks inherently unnatural to us.”

The gravity wheel provides the astronauts with a sense of normalcy during their epic mission. Not only does the audience see the brilliant contrast of astronauts engaged in everyday activities, such as running on a treadmill, in this space, but the vast windows allow for some spectacular composited views, and provide a backdrop for some key moments in the story. Large pieces of the wheel were created as physical rotating sets, calling for the most seamless of integrations between CG and live action plates.

Naturally, it was important for the film to maintain a cinematic beauty, alongside the dedication to accuracy throughout. Cultural reference points were frequently drawn from 2001: Space Odyssey, which, Lawrence notes, “set the subconscious benchmark for all as to what space looks like, and how it would feel to be there.” Director Ridley Scott also drew inspiration from Chesley Bonestell’s sci-fi illustrations from the 1950s and 1960s, adding a retro space look into the design mix. Despite the measures taken not to go “too sci-fi” in the look, it was arguably inevitable that such a dramatic story set in a foreign outer space environment would dazzle. “Form follows function,” says Lawrence. “We believe in the accuracy, and that’s cool in itself.”

Framestore’s compositors followed suit, delivering a photographic finish to shots of the Hermes.  “We used very controlled amounts of convolve and glow to beautify the shots -- though what came out of Lighting was already great, they made some excellent passes,” says 2D supervisor Bronwyn Edwards. “Our compositor, Nico Coronado Rivero, developed a lens flare tool, which digitally matched the flares captured in camera, and was used across all of the shots for maximum continuity.”

Designing an entire planet was another task for Framestore, which was responsible for the look of Mars throughout the film. With a key opening shot and various space establishers, it was again important to strike the balance between accuracy and cinematic beauty.

Framestore knew that they would use the same technology as for the Earth in Gravity, consisting of a volumetric render of extremely high resolution texture information, combined with dust and atmospheric clouds. The challenge lay in finding adequate reference material for Mars. “There’s not much color photography out there,” says Lawrence. “We used a combination of photography and satellite data, in a fairly novel way, to get everything we needed.”

Unlike the Earth, with its surface of blues, greens and browns, “Mars is a dusty reddish planet,” says Lawrence. “Our first attempts were very realistic, but lacked the interesting variation of color and contrast found on Earth. The movie demanded something more vivid, so we spent some time on a creative journey to show the variation in features, surfaces and textures -- all of which also had to fit with the live-action footage shot in Jordan, plus the scenes at launch stage in the lower atmosphere.” The colors used were in constant debate, as was the volume and style of clouds used within the atmosphere. “We added light clouds to the surface, to echo the dust clouds; above that, we worked to create something that would add the depth we wanted, without importing the fluffy white variety we’re accustomed to on Earth,” Weatherley says.

Three key geographical features were used on the planet’s surface: the Olympus Mons, the Schiaparelli crater, and the Valles Marineris, a 4,000-kilometer Grand Canyon-style feature carved alongside Mars’ equator. Though not all narratively called for, the additions again helped to ground the film’s story in a space reality. “Our hope is that the three landmarks are recognizable to audiences already well-versed in all things space,” says Weatherley.

“The heritage of the book -- Weir’s detailed research, the input of real astro-scientists throughout, the refining of the science -- just reinforced our desire for authenticity,” Lawrence adds. “It was nice to be able to feature real touch-points in this context.”

Framestore was proud to have been awarded the climactic ending of the film, which incorporates a complex action sequence with a full array of CG assets and effects. “We really have everything in this sequence,” comments Lawrence. “There’s a long spacewalk, an explosion to slow the Hermes, a frenzied, dizzy, spinning Watney, complicated wire rig and CG replacement -- plus, of course, the Hermes and planet Mars in the background. It was a massive compositing task, and a long sequence, that also needed to look beautiful.”

The tethered astronauts proved an extremely technical piece of animation, incorporating a huge amount of cloth simulation on the actual ropework. The astronauts are a combination of live-action footage shot on wire rigs and full CG digi-doubles, composited seamlessly together.

Wire removals were an ongoing task for Framestore’s compositors, who worked to create the perfect zero gravity effect. “The long, slow shots are beautiful to watch, but meant we needed both very precise paintwork and tracking, as we were working in native stereo,” Edwards says. “Disparity passes from our triage process helped us to map, paint and re-project patches so that the body tracks work in both the left and right eyes. We also had full body stereo roto done, as once we removed the wires, we sometimes found that there was a slight bounce left in their motion that had to be corrected.” The film was shot in native stereo on RED cameras with 5K plates, resulting in extremely sharp, beautiful imagery. Framestore worked closely with The Third Floor on the technical previs of their shots, particularly while on set for the shoot. “Having Casey Schatz on the ground for technical previs was very useful,” says Lawrence. “We were able to take our detailed model of the Hermes and do real-time interactive post-vis on set with Ridley. It really helped us in composing shots, driving the reality and beauty of what we were doing. It’s difficult for the actors, too, to work mostly on green screens and rigs -- previs was so important here as it helped everyone understand what was going on.”

The Martian marks the first implementation of a triage process for Framestore. 2D Supervisor Bronwyn Edwards was enlisted to implement the new pipelines for the project, bringing with her valuable experience of native stereoscopic shows.

The triage process settles inaccuracies between the left eye and right eye stereo plates, in both color and alignment. Framestore was requested to tackle the work upfront, rather than leaving triage until the final stages of compositing, making for a more efficient workflow. “Getting all of that work signed off at an early stage really helped,” Edwards comments. “It saves the rest of the compositing, and the real beauty work, for a later stage, without the fear of needing to go back and take it apart.”

The new pipeline was based on The Foundry Ocula toolset, with the work carried out by a combination of compositors and paint and roto artists. The team, spearheaded by Edwards, spent a great deal of time finessing the technical processes to reach a quality that would stand up to external stereographic standards. The process provided a fine learning opportunity for Framestore’s artists, some of whom had not worked on stereo plates before.

“All of our compositors and paint and roto staff worked on at least one triage shot,” says Framestore VFX producer Clare Cheetham. “It made their usual compositing work more fluid, requiring them to consider the aesthetic of the shot as well as the technical elements -- it was extremely valuable on-the-job training.”

The Martian proved a fantastic achievement for Framestore, who enjoyed a collaborative working environment with both the director and his team, and between internal departments.

“We had a great relationship with Ridley’s team,” Cheetham says. “[VFX producer] Barrie Hemsley has a strong VFX background so had a detailed understanding of our work and the processes involved. Richard Stammers and Chris [Lawrence] worked closely together too, and were able to share each other’s knowledge.”

Internally, the development of new technologies and the triage process brought together artists across departments, making for a fluid and efficient workflow between modelers, trackers, compositors alike. The making of the film allowed Framestore to learn and grow, delivering a super high quality show in the process.

“Working with Ridley Scott was a real pleasure,” says Lawrence. “His filmmaking process, the detailed storyboards and pre-visualization that he’s known for, made this such an interesting project for us. We were able to use our previous knowledge in this field as a base from which to realize Ridley’s vision for this brilliant original story.”

How ‘Luck’ Applies a ‘Less is More’ Approach to Comedy
Z is for Zagreb: The Animafest Zagreb Exhbition 1972-2022
Dude! - ‘Rise of the Teenage Mutant Ninja Turtles: The Movie’ Arrives
‘Super Giant Robot Brothers’: A Milestone in Virtual Animation Production
‘Luck’ Aims to Bring Hope to Kids In and Out of Foster Care
Pre, Tech, and Post: The Many ‘Vizings’ of ‘Chip ‘n Dale: Rescue Rangers’
Hammering Out the VFX in ‘Thor: Love and Thunder’
END_OF_DOCUMENT_TOKEN_TO_BE_REPLACED