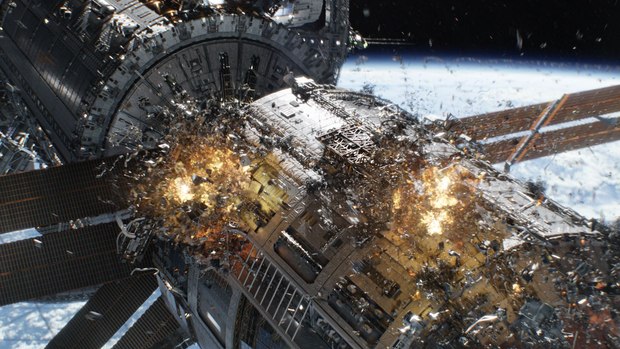 Destroying the world at a large scale is nothing new for Dean Devlin, who has served as a producer on Independence Day and Godzilla. What is different this time around is that he has also taken over the directorial duties for Geostorm, which revolves around a conspiracy to turn a network of satellites designed to the control the climate into a mechanized weapon that creates global destruction and mayhem.

Working with production VFX supervisors Chris Watts and Jeffrey A. Okun were Framestore VFX supervisors Rob Duncan and Christian Kaestner. Framestore London looked after the construction of the 1.5km-long International Space Station, a futuristic shuttle, spacesuits and digital doubles of Gerard Butler and Alexandra Maria Lara. Framestore Montreal built the vast array of connected satellite hubs known as the Testudo Net and the interior of the ISS where an action sequence takes place as the machinery malfunctions.

Geostorm is one of the first shows where Framestore worked hand-in-hand with The Third Floor on the previs, which was subsequently ingested. “Because most of the shots were full CG we were able to use their camera and share assets,” remarks Framestore CG supervisor Alexis Wajsbrot. “It helped us to do a first pass of blocking animation.”

A full model of the ISS needed to be created that was high resolution from every angle. “We used some of the panel library and a lot of greebles from the ISS in Gravity but we definitely had to start again,” Wajsbrot continues. “Building the ISS was the biggest challenge as it’s shown in most of our shots and displayed in different states as the space station gets more destroyed. We needed our assets to holdup close-up and faraway in various situations. That’s where we spent most of our work.” The ISS consists of 20 modules, which took a full 1,000 days to construct. “Each module was way too big even in Maya for the modeller to model as one so they were split into 40 different parts,” Wajsbrot says.

Hundreds of textured kits were modelled that consisted of different panels, various pieces of technology, pipes, and cables so nothing new had to be created when building a module. The LEGO-block approach allowed for each part to be instanced, thereby, making rendering a lot more manageable. “We had to create a whole new pipeline to be able to instance, which is still being used today.,” Wajsbrot recounts. Point clouds rather than geometry were baked and every department watched a low-resolution version to guide decisions such as lighting. “Render time was the only time we were able to see the ISS in it’s full glory because that was when all of the instancing was happening,” Wajsbrot explains.

“We always had the sun going into the camera so all of the CG in front of us is backlit and has a rim to make the shot as nice as possible,” says Wajsbrot. “Not to have too much noise we didn’t make the sun as strong as it should be. We tried to be consistent and one of our sequences is mostly at night when the ISS is being destroyed and fire plays a role. The spacewalk is in full daylight where the sun is strong. We could play a lot with lens flare and where the sun is hitting the lens we almost white out the frame which is quite pretty. In the ISS there are thousands of individual lights that include architectural lights for beauty lighting and navigation lights.”

Fire needed to be simulated in a zero-G environment. “To destroy the gigantic ISS was tricky where modules are colliding in-between each other and there was debris all around hitting the ISS; that was a massive job for the effects team,” Wajsbrot notes.

Full CG models were built of the shuttle bay, satellite bay and interior of the mainframe. “A portion of the shuttle bay and satellite bay sets were built while the room that contains the mainframe which Gerald Butler and Alexandra Maria Lara are going to turnoff and reboot the whole Testudo Net was invented by Framestore because they shot the scene with blue screen,” Wajsbrot remarks. “It looks like a render farm with lots of blue little LED lights, networks and servers. For the other modules we had to invent the interiors and sometimes reused some of the rest but mainly what we’ve done is put in a lot of trusses, structures and different layers to bring a level of realism to the destruction.” The destruction of the ISS takes place over 100 shots, and the weightlessness made destroying the space station easier because all of the objects had to be constantly moving and never slow down. “It was much harder for fire because we don’t really know how an explosion looks like in zero-G,” Wajsbrot observes. “We had to do a mix of how real fire looks on Earth and bring a touch of magic because there’s no atmosphere and oxygen so it needs to ignite but turnoff quickly. We had to build a lot of different libraries of fire that we could populate on the ISS on some of the wide shots.”

Rendering the faces of Gerald Butler and Alexandra Maria Lara was the second major challenge for Framestore and involved creating a 4D workflow later re-christened the Doppelganger technique. “We had an array of 16 RED cameras shooting at 4K or 5K at the same time capturing the facial performance of Gerald Butler as he was sitting in a chair,” Wajsbrot recalls. “We were able to generate a scan per frame and project the texture onto Gerald Butler to produce a CG face that looked exactly like him which could be turned around with the lighting burnt in. We had to redo the groom and sometimes the entire mouth in CG.”

Further modification was required when Butler and Lara go for a spacewalk to release a locked door on the ISS. “The sun was way too powerful not to light their faces,” Wajsbrot details. “We kept some of the light information that we had on the textures and had to transform the changing topology mesh so we could paint actual texture.”

The digital doubles of the two actors wearing their spacesuit were so convincing that the camera could move around them 360 degrees and go in for close-ups. “The only thing that we didn’t do was change their performances,” Wajsbrot says. A huge asset to build was the Testudo Net. “We modelled 14 different hubs with each one having 10 satellites plugged into them which are used like batteries,” Wajsbrot details. “Each hub does something different such as releasing capsules to remove clouds to control the weather. We received concepts of the different hubs in order to make the Testudo Net. They are linked together by these giant solar panels so we had to find a good workflow when it came to shaders. Six hubs are shown close-up so we had to give them a good amount of detail. Dean Devlin and Jeffrey Okun wanted to control how far and close the Testudo Net was to Earth, and the destiny of hubs and satellites so we had to find a way to be able to change the Testudo Net per shot. We made an animated rig with low resolution hubs that we were able to change and when we were happy all of the hubs were instanced together in order to render it per shot.”

The interior and exterior of the satellite was built on set. “We had to match, and during the explosion simulation the satellites needed to get dirtier,” Wajsbrot explains.

“I’m proud of the 4D faces because the workflow we did at Framestore was great,” Wajsbrot concludes. “Even if we did this three years ago it would still hold as some of the best close-ups of a digital double talking that is out there. It’s different work than Rogue One where they had to build a character that doesn’t exist anymore. We had Gerald Butler available and could shoot him. We wanted to be able to do the textures in 3D, relight it, and put the CG face into a zero-G suit where you don’t have to do wirework. It’s a good technique that I can see being used more in the future.” Putting the Fun in Dysfunction: The Non-Humanistic Therapy of ‘HouseBroken’
‘The Freak Brothers’: This is Your Humor on Drugs
The Heroic Logistics of ‘Superman & Lois’ VFX
‘Eureka!’: An Inventive Imagination Runs Wild in a Prehistoric Paradise
Bill Fagerbakke Talks Nickelodeon’s ‘The Patrick Star Show’
Re-VIEW: ‘Love, Death + Robots’ – A Visceral Pleasure
Will We Fail? Absolutely: A Conversation with ‘Birdgirl’s Erik Richter
END_OF_DOCUMENT_TOKEN_TO_BE_REPLACED