CG supervisor Robert Allman talks about the challenge of recreating the expansive and hard to shoot environments of the world’s tallest mountain. 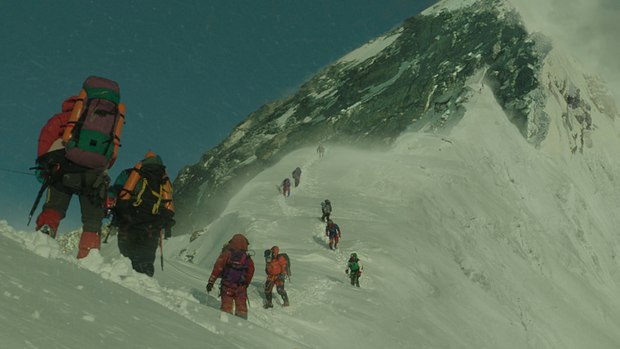 All images courtesy of Framestore.

After making his English language debut with 2 Guns, Icelandic filmmaker Baltasar Kormákur focused his attention on a true life tragedy where, in 1996, eight mountain climbers were killed when struck by a massive blizzard on Mount Everest.  In order to do the story justice, Kormákur recruited his frequent collaborator Dadi Einarsson (The Deep) to supervise the visual effects. Einarsson then hired Framestore as one of the production’s VFX houses.

“The reference we had was actual photography of Everest. They key here is that it was GoPro footage the team had shot,” states Framestore CG supervisor Robert Allman.  “The GoPro footage used a fisheye lens so it has a different look.  Also, it was handheld shots taken by climbers, so generally you couldn’t use the footage as a staged shot.  There were many things about GoPro footage that they really liked; it took in large panoramas of Everest where you can see all the way down to Nepal and China.  One of the problems, however, was that you couldn’t possibly film the GoPro footage with a conventional 35 or 50mm lens.  You wouldn’t see that much of the landscape.  In order to get the feel of the mountain’s expanse, we had to play with the actual dimensions of Everest so you could get these big sweeping vistas.”

To get the mountain and action looking right, a combination of live-action and staged footage needed to be digitally enhanced.  “In the film, once you get up into the high peaks, it’s mainly shot on greenscreen,” notes Allman.  “There was a shoot in the Italian Dolomites that was augmented to make it look like Everest.  But there was also a lot of greenscreen shooting. Part of the problem with the greenscreens was that the size of the stage wasn’t large enough to film all the climbers as they wanted to them to be shot.  At the point when the climbers are on the Hillary Steps, there had to be enough distance between them in order for them to need to communicate by radio. That’s what the actors are doing.  But given the size of the greenscreen stage, they were close enough to each other that it was implausible they would need radios.  So we take that footage and break apart the stage in CG.  You could roto out parts of the set and do CG replacements between the groups.  It was done in 3D rather 2D.”

Wind machines were used onset to blow artificial snow, with more snow added digitally.  “We did quite a bit of art direction on the way the snow worked,” reveals Allman.  “With 2D paint work you can keep things fairly visible.  Given that there was a lot of snow being blown around in the foreground of the shots, quite a bit of the snow was added onto the backgrounds.  They wanted to keep a sense of geography and where the climbers were on Everest.  When climbers are on the South Summit they still wanted you to read the Hillary Step. The final Summit is not that far away, but being so close to camera you’re almost whiting them out.  We had to play with the gusts of snow clearing occasionally so you can see the action.  Over the course of a shot that moment stays in your mind and you can put that action into context.”

“With a mountain like Everest the snow is always being blasted off the face by an upwards wind because of the nature of air pressure and the way winds travel,” continues Allman.  “We started with that premise [for our CG snow].  You were always going to see snow travelling up the slopes but occasionally onset the wind machines wouldn’t be pointing in that direction so you would get a different read.  You have to stick somewhat with what is going on in the background.”  Spindrifts needed to be depicted, which helped to create the impression of the presence of thin air. “The particles are at such a distance that you can no longer read them as particles.  Sometimes it seems like a fine moving cloud.  At that distance you’re reading the shapes they’re making.  There’s a particular formation off the Summit on the peak of Everest which is quite distinctive.  It blows right off the peak. We were always sure to include that while being faithful to the footage we had.”

For the aerial shots, the CG camera angles were grounded in reality.  “We stuck to the premise that it would be the kind of the thing you would see if shooting from a helicopter,” says Allman.  “As we get further away, digital matte paintings get used.  Often a lot of it is re-projection.  We would do lighting passes in CG and the matte painters would get to work. Getting that amount of detail isn’t easy if you’re doing everything full CG.  There is a fair amount of distant matte painting which is often mixed in with the full CG in the foreground.”  A helicopter was rigged with six cameras underneath, allowing for 360 degree footage capture.  As Allman describes, “They did quite a good helicopter pass on Lhotse Face and Everest.  Even with that you still have to do lighting passes, and the difficulty of putting that imagery into matte paintings is trying to keep consistent with the lighting.  You may want to play the sun at a different angle to make sure that everything is back lit, which would require relighting and CG.”

“We took low resolution models of the landscape, staged the cameras within those and worked out those bits where we had the mountain close to us,” states Allman.  “On the bigger establishing shots we would do a modelling pass that was reasonable for any kind of object that you’re making.”  The director wanted a particular look for the skies.  Notes Allman, “When you’re standing on a mountain, the richness of the sky is a different colour from what you get down at ground level, which shows considerable atmosphere when the sun is coming through.  A lot of work was done with the sky at sunset or twilight.  Sometimes the time of day is dependent on how far up they can get their lights onset.  On Everest, the time of day and sky were dictated by the story.”  The cloud level was mostly below the top of Everest, the tallest mountain in the world.  “There are some panoramas where you see clouds pooling around the mountaintops. A lot of that was DMP [digital matte painting] because it was taken from photography of that type of formation.  Most of the clouds we had above Everest were wispy ones that you get at high altitudes.”

Working with lead VFX vendor RVX meant sharing numerous digital assets, an inherently difficult process.  “RVX was keen that we could share assets. They took some of Framestore’s models and rendered them in their own renderer,” states Allman.  “We even shared some of the Houdini caches of volumes that were rendered.  It was a complex process going from one company to another and put assets into a form where they can realistically be shared.  At the point where you render them is when they diverge.  Producing effects and matte paintings are not entirely straightforward.”

Integrating all the matte paintings with rendered geometry was particularly challenging. According to Allman, “You don’t realize a lot of your effects until the volumes are rendered.  The matte paintings by nature tend to be topographically simple. So, in order for the VFX work to hold up over a distance, it needs to have geometry that it can fit with once it’s rendered.  If the DMP does something different because it has been more arbitrarily painted then the two things can’t match.  We compensated for that by modelling more than anticipated for the DMPs.  We had to make models that were projected and retrofitted into what had been made by the artists.”

Overall, Framestore’s biggest challenge was getting the sense of scale of Everest. As Allman explains, “The solution was a trade-off between what matte painters can achieve, how effects artists can come together with that, and how CG can be artfully knitted in to try and get all three things working together.”  Motion-captured digital double mountain climbers are dwarfed by the natural landscape. “That is how they appear naturally from a distance. So it’s best to leave that and whatever is in the foreground replicated again in the far distance, which tells you how big things are,” Allman concludes. “The immersive full CG environments are great.  You can’t get helicopters up that high [to shoot] because the air is too thin. So Everest is seen in ways you couldn’t normally see it.”