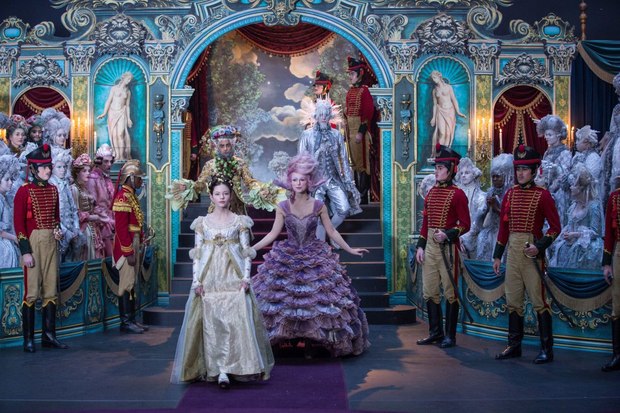 Disney’s The Nutcracker and the Four Realms takes audiences on a journey through a beautiful but mysterious parallel world, a land filled with intriguing and magical characters. Directed by Lasse Hallström and Joe Johnston, the film is a reinvention of the time-honored story, “The Nutcracker and the Mouse King,” written in 1816 by E.T.A. Hoffman that later became one of the world’s most popular ballets, featuring the music of famed composer Pyotr Illyich Tchaikovsky. To help realize Disney’s new adaptation, overall VFX supervisor Max Wood and VFX producer Marc Weigert brought on leading visual effects house MPC to handle the bulk of the digital work.

MPC’s team was led by VFX supervisor Richard Clegg and hubbed in Montreal, with artists working at the studio’s London and Bangalore facilities as well. All told, MPC handled more than 1,000 shots on the film, creating a wide array of CG environments, including the completely digital realms of snow, flowers and sweets, along with palaces, forests and rivers, over 100 different digital assets and a number of complex digital characters such as the giant Mother Ginger, the Mouse King, an army of tin soldiers and a set of Polichinelle clowns.

One of Clegg’s biggest challenges was bringing a sense of believability, with some degree of physical realism, to the fantastical worlds of the four different realms. Waterfalls, rivers and mountains needed to seem real -- each realm was separated by a CG river with numerous waterfalls, 23 in total. In most fantasy films, crafting such worlds would involve a considerable amount and use of digital matte paintings to extend and enhance the environments. On The Nutcracker and the Four Realms, the environments instead was fully modeled in 3D, which provided the filmmakers complete access to traverse the world and show it from any desired angle or distance. “To begin with, there was always the debate about how much we were going to matte paint and how much we were going to build,” Clegg explains. “And in the end, we ended up building the entire world in CG. All of the shots you see, apart from the sky, were mostly fully built and rendered, which gave us a lot of flexibility to match the plate and make sure we extended the desired stage lighting. That was always something we’d nudge around…find the sweet spot on the plate where we’d blend from, and where we’d take over. We also did set extensions and replacements. For example, in the front of the palace, around this sort of gate in the arch that was in a lot of the photography, the light was really focusing on the characters. So, we ended up, in a lot of cases, using the background as a guide, and then adding in a wider light source.”

Clegg notes that there quite a volume of that work, continuing, “We had many, many trees, vegetation, buildings, rocks, the palace itself. We had to optimize those assets with a really good workflow and pipeline, so we could distribute them around all the shots, and render that all from any position and have it look good. We had a lot of forest set extensions in the fourth realm, which is the dark, rather foreboding former land of amusements. It’s kind of this spooky forest where you meet Mother Ginger’s marionette for the first time. We extended the forest, all the shots inside the forest, as most of the trees were cut off at the top, and then extended off into the distance as well.” One of the film’s complex characters is the giant Mother Ginger puppet, which by design, is a menacing, 40-foot tall, 30-foot wide marionette with a circus tent for a skirt that Mother Ginger manually operates from inside. With steampunk design elements, the Mother Ginger marionette leaks steam from her pistons and chimney stacks. The skirt is actually a circus tent that houses the Polichinelles, who pop out of each other like Russian Matryoshka dolls.

Though an enormous puppet skirt, torso and head were used for some practical shooting, for the most part, a full CG character was used where CG extensions and enhancements to the live-action elements, such as arms and mouth, weren’t sufficient. “We built the tent and upper torso,” Clegg notes, “But, then we had to make that torso a bit bigger, along with other adjustments. There’s quite a lot of stuff that was shot that we had to enhance, but often, just completely replace, to give it the right look as it moved around.”

MPC animated an army of seven-foot tall tin soldiers that attacked Mother Ginger by climbing on top of each other to form a large pyramid, as well as swarming all over her canvass tent as they did battle. In addition to dealing with the challenge of finding a believable way to “move” the metallic soldiers, Clegg’s team had to contend with how all the characters interacted. “The battle with the tin soldiers was a tricky piece of work,” Clegg describes. “It was a challenge because of their inherent design, the body mechanics, which didn’t provide them enough flexibility of movement. They’re giant tin toy soldiers that have very primitive, restrictive joints. So, it was tough to make them move and behave, still physically correct without bending, because they’re tin. When we first created the pile of soldiers for the battle, they looked quite fixed and rigid climbing over each other. But, they’re also climbing over the rather large cloth tent to try and attack Mother Ginger, who tries to beat them back with trees she pulls out of the ground to use as clubs. It was pretty complicated. We had a lot of workflow issues to content with as we moved back and forth between animation and simulation.” Another major character is The Mouse King, Mother Ginger’s sinister and fearsome nine-foot tall lieutenant, a fully CG mass of 60,000 individual mice, running up from the rodent’s feet to give shape to its head, torso and arms. As mice fall off, they quickly scamper and jump back onto the creature’s feet to join the mass once again. “It’s a pile of 60,000 mice that all just grow up, morph around and are quite fluid,” Clegg remarks. “They eventually pick up Clara [the film’s hero] and carry her around this forest, later fighting alongside other characters.”

The film’s most complex character as far as development, MPC had to find a proper balance between harnessing a swirling horde of believable, realistic mice, and then blending that with an overall Mouse King structure where movement could be directable.

The Mouse King never has a solid form and never takes the same shape twice -- the teeming body of mice always undulates, its moves inspired by the unique dance style of Lil Buck, aka Charles Riley. The directors employed the dancer’s “Memphis jookin” style, which integrates slides, glides and toe spins, to provide reference for the Mouse King’s rolling and surging motion you see in the film. The Mouse King’s movements were roughly blocked, with Lil Buck referencing the basic animation as he crafted his own dance performance, which was captured on a number of cameras and used to drive the creature’s animation. “Obviously, this character is quite unique,” Clegg says. “Trying to make that thing feel like a mass of mice, with fluid movement and proper weight.”

Developed over a period of six months with a team of more than 30 artists, the Mouse King was animated in two stages: the primary performance centered around the amorphous shape and structure, which was keyframed, followed by the simulations of tens of thousands of mice that moved together in a believable way. Three different shapes of mice were created -- each modeled with multiple color variations. Procedural variations added during rendering produced an infinite number of mouse options, where each looked similar, but not identical, to the next. The swirling creature’s lead mouse, Mouserinks, one of Mother Ginger’s devoted soldiers, controls the Mouse King’s movements. According to Clegg, “With Mouserinks, this cute mouse, the challenge was more creative than technical, finding the right balance between how anthropomorphic and mouse-like he was -- how much of a ‘real’ mouse he was versus how much you sense that he’s got intelligence and is part of the storytelling.”

As is often the case with visual effects artists, the more complex the project, the more daunting the number shots, the more enjoyable the work becomes. “For us, this was a really different project,” Clegg concludes. “The fun thing about The Nutcracker, was that it was massive. It was enormous, with an incredible variety and complexity. The size and scope of this project made it super fun.”