Visual effects studio delivers almost 700 shots, plus main titles, for the Netflix fantasy adventure about a young dead woman, miraculously resurrected then flung into in a battle between good and evil. 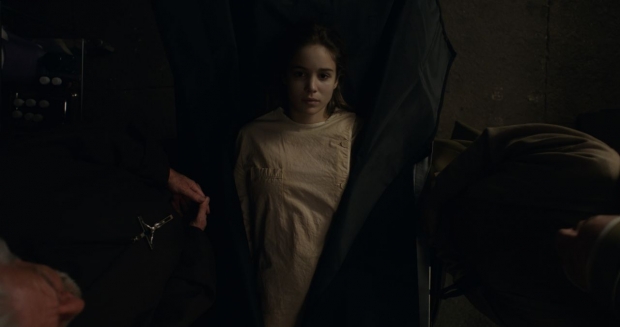 The Embassy has just shared with AWN their VFX work on Netflix’s highly acclaimed new fantasy-adventure, Warrior Nun. Working with showrunner Simon Barry as the sole VFX studio on the series, the Oscar-nominated studio was involved from concept design to on-set supervision, delivering almost 700 shots across 10 first season episodes, as well as the main title sequence.

Warrior Nun, based on Ben Dunn’s comic series, follows Ava, a young woman who wakes up in a morgue with inexplicable powers and gets caught up in a battle between good and evil.

The Embassy is well known for its visual effects work on sci-fi and action projects (Iron Man, District 9, Lost in Space). 17 years’ experience working with all kinds of sci-fi tech, however, meant pivoting to fantasy and creature VFX was the next logical step for the team; they created all manner of demons, ghosts, wounds, and magic for the new series.

The Embassy joined the production early on to front-load development of characters and magic seen in the show. Winston Helgason, Embassy EP, travelled to Spain for pre-production in February last year to decide which aspects of the show required VFX and which could be achieved practically. Concept design was completed before principal photography, enabling The Embassy’s artists to hit the ground running once they received the first edits. This allowed artists to maximize their time, finalizing each shot to the platform’s high standard. Speaking of what audiences might expect from the show, VFX supervisor Michael Blackbourn explained, “Our work on Warrior Nun spanned every kind of effect. Demons? Check. Ghosts? Check. Mysterious smoke tendrils? Also check. We healed wounds magically and also inflicted wounds using a myriad of medieval weapons and instruments. Along the way we created a 3D St. Peter’s Square, zoomed into microscopic life, put a camera inside a solid rock, and sent Ava phasing through just about every surface imaginable.”

Barry adds, “The Embassy were not just a vendor but a creative partner, working on creature design and VFX that was crucial not only to the storytelling, but also the larger mythology of Warrior Nun. Winston, Michael, and the whole team are storytellers who love what they do and were fully committed to making the show better. That’s all I could ask for in a creative partnership.” Unsurprisingly, post-production was impacted by the COVID-19 pandemic, hitting the world as the team was wrapping up work on the final episodes. In order to keep their artists safe and still deliver on schedule, The Embassy invested in remote hardware terminals and a new secure firewall to enable the company’s 50 employees to work remotely and finish in time; they finalized the last 100 shots from the show remotely, successfully tackling the challenge of distributed working – something they will be carrying forward as an optional capability in the future.

The Embassy will soon reunite once more with Netflix on some new yet to be announced projects.

‘Natural Habitat Shorts’: Like ‘Ranger Rick,’ But for Adults
Framestore Sets Sail on ‘1899’ with New Virtual Production Tools
Animated Characters: The Art of Babbitt – Part 1
Bruce Smith and Ralph Farquhar Talk ‘The Proud Family: Louder and Prouder’ Season 2
VFX is the ‘Thing’ for Tom Turnbull on Tim Burton’s ‘Wednesday’
We Need to Chat
Choc Chip Animation Riffs on Pop Culture in ‘The Art of Murder’
F is for Flake: The (Not So) Great Animation Robbery?
END_OF_DOCUMENT_TOKEN_TO_BE_REPLACED