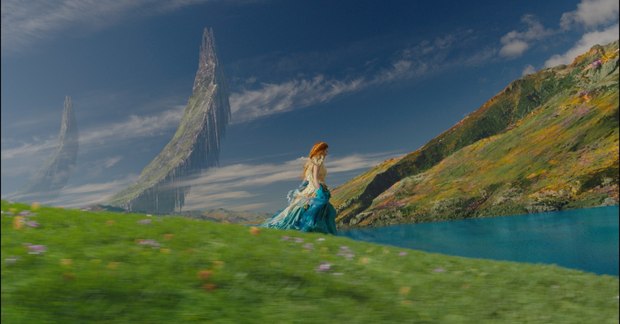 Colorist Mitch Paulson of EFILM in Hollywood met director Ava DuVernay when he handled final color grading for her lauded historical drama, Selma. Her follow-up feature, the science fiction-fantasy A Wrinkle in Time, shot by Tobias Schliessler, ASC (Beauty and the Beast), concerns teenager Meg (Storm Reid) and a group of friends as they travel through time and space with the guidance of three magical women -- Mrs. Which (played by Oprah Winfrey), Mrs. Whatsit (Reese Witherspoon) and Mrs. Who (Mindy Kaling) -- in a search of the girl’s missing father (Chris Pine).

Color is a key signifier in the story, helping underline a sense of place and associated feelings as Meg moves through the world she’s known throughout her life and then traverses the many strange planets on her journey. Paulson, who worked in Autodesk Lustre, explains the concepts DuVernay and Schliessler brought to the table, from pulling color and saturation out of early scenes introducing Meg and her difficult home and school life to expanding palette in a variety of ways over the course of her interplanetary quest.

“Tobias naturally shot everything beautifully,” Paulson says, adding, “and then it was nice for us to be able to go through the film, including the large number of visual effects, in my theater to really bring out the filmmakers’ concepts,” of having the early portions of movie a bit less colorful, more gloomy and then to give the color an extra push when the time travel distant planets Uriel, Orion and Camozotz gets going. DuVerney spoke to Paulson initially of The Wizard of Oz, which famously starts in a monochrome world and then suddenly opens up into very rich color, although she wasn’t after quite such a self-conscious leap, preferring instead to subdue the saturation of select hues initially and then push the saturation the other way when the story leaves earth.

Paulson built custom curves within Lustre for those early scenes to isolate certain colors, such as greens and blues, and pull down the saturation to make them significantly less vibrant. The curves enabled him to be selective about these corrections and avoid affecting skin tones. In addition, he used the color corrector’s Diamond Keyer and Shapes drawing tools to isolate more specific secondaries so he could be very specific where the changes in color would be applied.

He also used multiple keys to further isolate and control other colors to create this less-colorful world and Meg’s emotional state resulting from her missing father and trouble at home and in school. Paulson built custom curves within Lustre that pulled down the saturation of selected colors, particularly blues and greens, while leaving skin tones healthy and natural.

“As soon as we go to the first planet,” Paulson elaborates, “we want the viewer to really feel the difference.” Here, Paulson took the opposite tack, using the custom curve to make the formerly-suppressed colors pop, again without affecting skin tones and making the characters seem unnatural. “I find that the Diamond Keyer gives me more control than an HSL [Hue, Saturation, Luminance] keyer. It lets me input parameters to key color, chrominance range and luminance levels for softness and tolerance.  I keyed almost everything in the shots -- grass, skies, water. I’d have at least three to four keys going per shot.” While most of the major color decisions in the film were based on this carefully conceptualized approach, there was one section set inside a cave that DuVernay and Schliessler decided they wanted Paulson to do some additional work on after seeing it projected in context and with the visual effects in place. “They both gave me some input on what was bothering them,” Paulson recalls, “so I tried something I’d had some success with before: I keyed into the shadow area and then blurred and darkened it a little bit. It’s sort of the opposite of the effect of the photochemical skip bleach that a lab would do to a print, which would do something similar in the highlights. It’s a subtle effect but we were all very happy with the results.”

Paulson oversaw multiple passes of A Wrinkle in Time, for 2D in the standard digital cinema P3 color space and Dolby Cinema HDR [high dynamic range], which offers the option of rendering much darker shadow areas and much brighter highlights. He also did the Dolby Cinema 3D version (designed for the brightest theatrical 3D image possible) and the more widely-used 3D mastered for lower-light-level projection.

EFILM’s Adrien DeLude handled dailies for the project and the company’s Portal was used to streamline VFX and VFX integration for the film.

The Massive Creative Fellowship Behind ‘The Lord of the Rings: The Rings of Power’
‘The Dragon Prince’ Director Villads Spangsberg Talks Toonlines and Tough Challenges
Laurence Fishburne and Steve Loter Talk ‘Marvel’s Moon Girl and Devil Dinosaur’
Taking an Old-School VFX Approach in ‘All Quiet on the Western Front’
‘Natural Habitat Shorts’: Like ‘Ranger Rick,’ But for Adults
Framestore Sets Sail on ‘1899’ with New Virtual Production Tools
VFX is the ‘Thing’ for Tom Turnbull on Tim Burton’s ‘Wednesday’
We Need to Chat
END_OF_DOCUMENT_TOKEN_TO_BE_REPLACED