Leading VFX and animation studio delivers 225 shots on 8 sequences, including the massive Moon interior that houses a dwarf star as well as the evil celestial AI anomaly, on the disaster movie maven’s latest film. 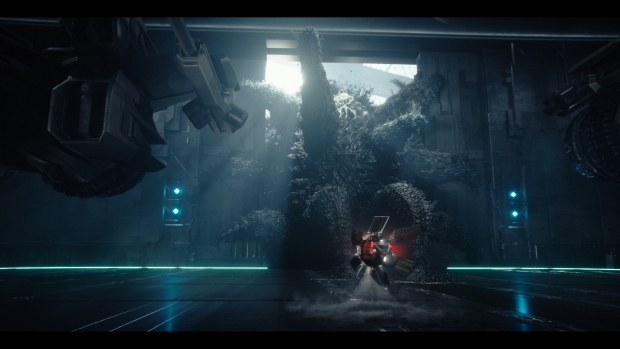 If there was ever a filmmaker with blockbuster disaster movies built into his DNA, it would be Roland Emmerich, who has destroyed iconic landmarks and put humanity’s very existence at risk via alien invasions, climate change, and Mayan prophecies in Independence Day, The Day After Tomorrow and 2012.  Moonfall is Emmerich’s new attempt to elevate the “end of the world” premise by also exploring the origin of life, similar to what Stanley Kubrick was able to achieve with the seminal 2001: A Space Odyssey.  Leading VFX and animation company DNEG, hired by Visual Effects Supervisor Peter Travis (Midway) to create the film’s malevolent celestial anomaly and massive Moon interior that houses a dwarf star, delivered eight sequences totalling 225 shots.

Moonfall was not a Hollywood production but an independently funded project with a budget of $140 million that had Roland Emmerich firmly at the center of decision-making.  “What was unusual for me is how much access we had to the director,” notes DNEG VFX Supervisor Stephane Paris. “With the show VFX Supervisor Peter Travers driving the dailies, we had Roland Emmerich present every time. We were able to get any answer, comments, or deeper briefs directly from the source, which isn’t often the case.”

Travis created early versions of Moon’s interior that demonstrated the ambient atmosphere and scale. “Of course, the designs got refined but the look was there even before DNEG started on the show,” Paris says. “Pete also designed many key shots to get them approved by Roland before we started them.” While the final visual effects shots were produced at DNEG’s Montreal facility, assistance was provided by the previs team based in London.  “DNEG’s previs team in London started the work on our sequences in March 2020 and because of the COVID19 situation, had the opportunity to refine and update their work until September 2020,” explains Paris.  “We also provided some concept artworks for the AI creature we call the Anomaly and for extra details inside the Moon Rings." Noting no specific visual research was conducted, Paris adds, “Our Dyson Sphere environment had to look credible in scale, lighting, and physics in the shots we created. That was the key word, ‘credible’. Every shot had to be tweaked in animation, simulations and lighting directions to make it look gorgeous.”

Conveying the scale of the Moon’s interior and creating the Anomaly, an AI creature comprised of millions of animated objects, were the two main technical challenges.  “As you can imagine the interior of the Moon was a challenge of its own,” states Paris.  “Its gigantic scale forced us to use every tool available to make sure we could detail anything to the desired level for any component for any shots. Instancing and procedural modelling made it possible. The heavy atmosphere and some static storms helped to make it look immense.”

Key to executing the Anomaly was conceptualizing the fractal geometry at its core. According to Paris, “We knew from our first conversation with Roland Emmerich and Peter Travis that its core was fractal based and the head would have some Mandelbulb quality. From there, we went in many artistic directions and created some concepts trying to bring together all the notes we received from our clients. It was technically challenging too as a few parts of this entity had to work in contradiction with the others and still look like one unique body. Our team used animation and FX simulations to define it and lighting to shape it in each individual shot. Our lookdev was built to give our compositing artist the freedom to make it all gorgeous looking.” “Our teams did optimize our methodologies anywhere possible to allow us to have some reasonable turnover renders,” Paris continues. “We provided all possible layers and elements separated to our compositing team to give them full artistic control over the shots. We re-rendered only what was necessary.” Regarding the numerous animation tests conducted for the AI creature, the VFX supervisor says, “We had a simple shape rig that gave us all control and a visual on each part that was forming the Anomaly. We discovered pretty quickly that we had to deal with some crazy speed to achieve the shots. We selected a few shots that represented the most challenging technical aspects to test our effects simulations and finalize the design.”

One unforeseen technical challenge was the final metal tunnel that gives access to the core of the Moon. “Because of its scale, its material and the spiral running pattern, it was tricky to keep the look in every shot and avoid the chariot wheel effect that makes your shot look like it’s running backward,” Paris shared.

Several tricks were utilized to convey the proper scale within the Moon. “From complex structures to multi-panelling, we covered each ring to serve their design and purpose,” Paris notes. “They were all procedurally textured. We made sure that each of every five different ring designs that are used to fill this environment had a working scale from any distance. A heavy global atmosphere helped to complete the look of this gigantic environment and create some beautiful god rays. To help the audience feel the Lander/Rover’s speed and movements, we added some smaller atmos pockets lit from the vehicle’s lights. Massive storms and static electric arcs completed this extraordinary environment.” Digital doubles of Brian Harper (Patrick Wilson), Jocinda Fowler (Halle Berry) and KC Houseman (John Bradley) were mainly used for the Lander/Rover in the full CG shots.  “Because some designs changed so much between the shoot and the final shots, most of the environment built on set was fully CG replaced. We only kept the actors and integrated them into our new alien world.”

In the end the biggest challenge was making sure that the heavy assets could be rendered in a timely manner.  “The design of the AI creature was a big stress point too as we went through so many artistic variations to achieve the design that pleased Roland Emmerich and Peter Travers,” remarks Paris.  “There are a few shots that I love. The one where you see the Moon interior light up and start to activate its rings; some shots of the Lander/Rover passing by some of the massive rings; the Anomaly attacking our heroes in the Alien docking bay; and the chase of the Anomaly in one of the Alien battleship hangars destroying anything on its path.  DNEG’s teams have put together so many cool shots.”

An Interview with Priit Pärn
‘Baymax!’ Provides an Rx for Humor and Compassion
How Digital Domain Brought Photoreal Characters to Life in ‘The Quarry’
SCAD GamingFest: Building Shared Story Experiences with Diverse Character Design
Mission Critical: ‘Lightyear’s Journey to Infinity and Beyond
Putting the Fun in Dysfunction: The Non-Humanistic Therapy of ‘HouseBroken’
‘The Freak Brothers’: This is Your Humor on Drugs
END_OF_DOCUMENT_TOKEN_TO_BE_REPLACED