DNEG Helps Visualize the 'Real World' of ‘The Matrix Resurrections’ 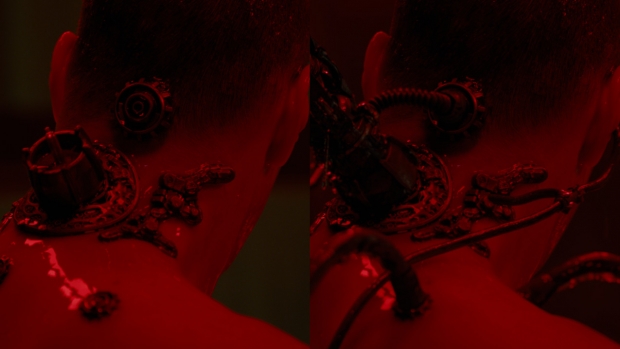 Visualizing the “real” world kept leading visual effects and animation studio DNEG’s VFX supervisor Huw Evans and his London and Vancouver teams quite busy on Lana Wachowski and Warner Bros.’ The Matrix Resurrections, creating extensive CG environments and characters across more than 700 shots. “I loved seeing the new changes and going back to visit some original iconic environments,” Evans shares. “Certainly, in current times, with everything feeling glum to have a project like this was awesome.”

Noting that an effort was made early on to pull reference materials from the original trilogy, the VFX supervisor says, “It was email backchains trying to find which studio worked on the assets. There was some with Warner Bros. but a lot of it was missing.”  A harvester, sentinel, and fetus egg were eventually found. “Then we had to track down a version of Maya that could open them,” Evans adds. “It was great having those assets so we could see how they were made. All that we could recover was the base model.  Texturing would have been redone anyway to a higher fidelity. That was started in Substance to try to get broad coverage of base metals.”

Everything was designed at a large scale, with the human dwellings’ color palette using a combination of earth tones and metal. “If Zion was a small section of cave, then IO is a megacity,” states Evans. “We referenced stalagmites and stalactites, so the space feels similar but less dank, dark, and purely human.  What Lana Wachowski wanted for this one was to feel like you have a proper combination of human and machine.” Brutalist architecture provided inspiration. According to Evans, “We found a bunch of clean energy farming technology and clustered housing. There’s a 3D printed crisscross lattice structure, almost like webbing, that we used to link. Behind that we’ve got the natural rock formations that is carved in areas, and natural in other areas.”

The machine world was designed in an entirely different manner. “The machine world is less about being pretty and more about being functional,” states Evans. “We wanted to keep the same nightmare rolling sky with lightning in it.  Lana likes that beautiful back rim lit look and wanted to bring some of that into the fetus fields as well. The harvesters were given little work lights which allowed us to sculpt the environment more with the light.  Rather than the power towers just being lit by the lightning flashes that crawl up and the red glow from the pods themselves, we started to put a few backlights in and tried to hide them here, there, and everywhere because it is quite an atmospheric foggy area.  It helped you to pick out shapes and to get the audience to look where you wanted them to look.”

Sentinels did not require a major upgrade; their look and movement had already been well established. “As you saw the sentinels before is how you see them now,” notes Evans.  “We gave them some battle damage because they’ve been around for many years.  In terms of how they swarmed and moved, we tried to keep true to the original rather than inventing something too new.”

There were, however, opportunities to experiment with the friendly synthient creatures.  “When Neo boards the Mnemosyne ship and gets introduced to the crew, there is the bulldoggish Cybebe that picked him up from the pod, Octacles resembling a doc bot from the original movie, and the tiny skittish multi-legged Lumin8 [a hybrid of a meerkat and grasshopper],” Evans explains. “There is a Kujaku as well in IO that Niobe calls down and speaks to, which is a manta ray-looking creature. Kujaku started out transparent, almost skin-like, with mechanical internals. But we backed off that and made it more of a metal creature with little gaps that you can see through. Those alterations helped Kujaku sit in the same world as the other creatures.”

The Mnemosyne required a major concept design. “We adapted concept art that took a lot of back and forth to get to look cool,” explains Evans.  “It was about bringing out the machine but making it more organic, not so blocky and static.  We gave it a nice floating tail to add a more fluid movement to it, but still tried to keep elements from the original movie, like the pads with the lightning on them. That had to be highly detailed because it was in a lot of shots from various angles and closeups.  Anything that is interior is mostly set.”

In describing the practical ports placed on the actors’ necks of the actors, Evans says, “Our biggest challenge in terms of ports and cables was when Neo was in the pod.  We had to individually track every port on his body, which were moving with his skin, and did our CG cables off the back of those.” As for the use of a practical pod filled with goo, Evans adds, “When Neo rises out of it, the goo on his face is real. The thing that we did do CG was the membrane, which was tricky to get to stick to his body in a convincing way.”

DNEG produced plenty of VFX for the film’s digital worlds as well, with Evans handling the Dojo Construct, which is in essence a training simulation that takes place within the Matrix.

“It was based on Rakotzbrücke [aka The Devil’s Bridge] in Germany, which is an arched stone structure that when looked at from a specific angle reflected in the water, it gives almost a perfect circle,” Evans describes.  “There are autumn trees as well.  We were in close contact with the team at Epic Games, which started to create the environment with Lana as well as blocking out how it should work.  We then inherited that environment, added the dojo in the middle, ran our cameras through it, rendered the shots, inserted falling leaves and other details.  At the time we were using bleeding edge Unreal Engine; the first version we used wasn’t for public release.  We had to rebuild on the engine on our end while they were sending constant updates. When we came across a problem, it was reported back to them.”

Exo-Morpheus was a technical and artistic challenge as he is a digital program that straddles the real world and the Matrix.  “He is a key character who has a lot of dialogue and closeups,” Evans says. “Yahya Abdul-Mateen II was shot as a real person in a body suit with head mounted camera.  We had a load of reference cameras so that every time he was being shot, we could body track him.  The facial data was put into our system and given to our animators. We treated him as a digital double as we normally would.  Did muscle and skin simulations.  Then we passed it to the effects team, which dressed him with the many balls that run over his skin and react to his muscles. That was the challenging bit of figuring out how that works and how fluid and formed he should be [in order to maintain his performance].  We want to make sure that his mouth and eyes were detailed enough.”

Evans goes on to note he had his fanboy moments.  “The biggest thing that stood out and got me excited was the homage to the harvester plucking the egg from fetus field and the big ship rising in the background.  Getting to recreate that, adding more details, and getting the animation working with the fetus inside.  Beautiful work on that.”

An Interview with Priit Pärn
‘Baymax!’ Provides an Rx for Humor and Compassion
How Digital Domain Brought Photoreal Characters to Life in ‘The Quarry’
SCAD GamingFest: Building Shared Story Experiences with Diverse Character Design
Mission Critical: ‘Lightyear’s Journey to Infinity and Beyond
Putting the Fun in Dysfunction: The Non-Humanistic Therapy of ‘HouseBroken’
‘The Freak Brothers’: This is Your Humor on Drugs
END_OF_DOCUMENT_TOKEN_TO_BE_REPLACED