Snarling dogs and moth-infested gowns highlight the film’s 1,850 visual effects shots, supervised by Max Wood, and produced with an eye towards speed and believability. 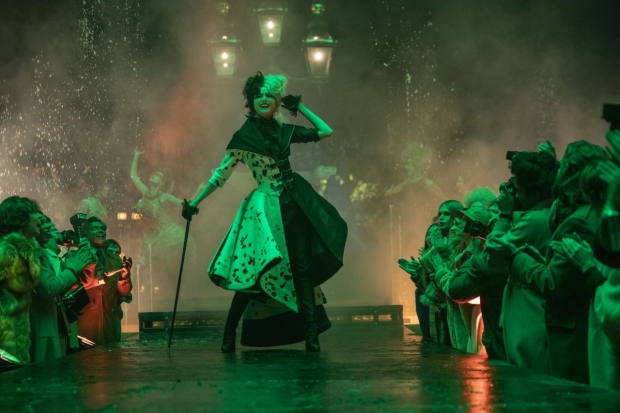 For director Craig Gillespie, storied canines and extraordinary fashion were key to the success of Cruella, his smash hit 101 Dalmatians prequel and origin story for one of Disney’s most evil and iconic villains.

Cruella is now available on Blu-ray, 4K Ultra HD, DVD, and Digital. Disney has created three 4K Ultra HD SKUs as part of a limited-edition collection at Target, Walmart, and Best Buy, respectively. In addition to the film, viewers will enjoy an array of bonus features including cast interviews, featurettes and deleted scenes in Ultra HD quality and Dolby Atmos.

To provide realistic visuals critical to the story’s believability, Gillespie relied upon VFX supervisor Max Wood to deliver 1,850 visual effects shots that included three snarling Dalmatians, a wily terrier, a fearless, eye-patch-wearing Chihuahua, and, of course, a series of outlandish gowns including one infested with thousands of moths. MPC Film handled the bulk of the VFX production, with de-aging, beauty, and cleanup work done by SSVFX.

“I tend to storyboard a shot list of the whole movie well in advance, so there are not a lot of surprises for the VFX team,” Gillespie says. “It’s mostly them being prepared and us trying to move quickly on the day. There were over 1,800 VFX shots in the movie, so there was a lot to cover in a very short period as we were shooting.” In the film, Emma Stone (La La Land) stars as one of cinemas most notorious – and notoriously fashionable – villains, the legendary Cruella de Vil. Cruella takes place in 1970s London amidst the punk rock revolution; the story follows a young grifter named Estella, a clever and creative girl determined to make a name for herself with her designs. She befriends a pair of young thieves who appreciate her appetite for mischief, and together they build a life for themselves on the London streets. One day, Estella’s flair for fashion catches the eye of the Baroness von Hellman, a fashion legend who is devastatingly chic and terrifyingly haute, played by Thompson (Howards End, Sense & Sensibility). But their relationship sets in motion a course of events and revelations that will cause Estella to embrace her wicked side and become the raucous, fashionable, and revenge-bent Cruella.

Asked about his use of previs, the director says the film did make use of some, but not an enormous amount, primarily for “big set pieces, like her [Cruella] going off the cliff at the end.” Gillespie also notes that “Previs ended up being really helpful there because that scene evolved with quite a bit of exploration from just trying to figure out how the dress would work… whether it just opens up or becomes a parachute.”

Having spent his formative creative years shooting commercials where he was always practically restrained by budget and schedule, Gillespie took full advantage of the freedom afforded by the scope and scale of the production. “The really fun part of the production was having creative liberties and talking through scenes with the teams,” he explains. “For instance, one of the ideas I had in the film was of starting out with a helicopter shot that goes through the roof of Liberty’s Department Store and then goes all the way down to the ground floor and through the doors. Everyone starts throwing out ideas and suggestions on how to do it. So, for me it’s really fun that we get to do that without many constraints.” Competing for screen time and viewers affection were the film’s iconic canine thespians, shot both practically and enhanced with CG. According to the director, “We always shot the real dogs in the scenes as much as we could with the thought that CG was there to fix and improve the shots.  The VFX team really did an amazing job because as I’m watching scenes now, I can’t really tell which one’s are the CG versus the real dogs.”

“We needed to move quickly,” he adds. “For instance, the scenes of the Baroness trying to come down the stairs with the three dogs or trying to walk 25 steps with them was not always easy, so we would then lean on the CG team to fix where needed. Making sure the dogs always felt grounded and weren’t getting too animated was of utmost importance. Using CG for the dogs was a luxury because sometimes the dogs would be looking at the trainer versus the actor.”

Gillespie was impressed with how quickly the VFX artists on-set would capture whatever data they needed without hampering the shoot. “We moved so fast on this film, but there wasn’t any hesitation with just having one Dalmatian on-set and the VFX team would just jump in and grab their references so they could match two more to that one.” Ensuring the believability of the show’s signature fashion design, a blend of practical shots and VFX, was also instrumental to the storytelling. “The fashion show in the park went right up to the end [of production] because [costume designer] Jenny [Beavan] was so busy with the number of costumes she was doing all the time,” Gillespie says. “Cruella’s fashion line I thought would take us out of the movie very quickly if it wasn’t good.  It was a tricky balance of trying to find something that felt appropriate to the 70s but still felt current.  So that was an evolution that kept going [with design and VFX] all the way up to the very end.”

Looking back on his hit film, Gillespie reveals that the biggest challenge wasn’t the pressure inherent in tackling such a high-profile Disney franchise character. It was tackling his own expansive plans. “Crazily, the biggest challenge was that I was very ambitious in terms of what I wanted to get accomplished,” he shares. “Sometimes it felt like it was too ambitious for the schedule, and the budget, and the suggestion was to try and lose things and I just don’t like having to lose anything. So, trying to get everything originally planned was the most challenging.  Some days were very condensed in terms of how quickly we had to move. I knew I had these actors that were so talented at their craft and that it wasn’t about them finding the moments; I knew that if I could just get in there and get six or seven takes at a certain range that they’d all be great and usable.” “There was a scene in the film where Horace and Jasper break into the Baroness’ house,” he continues. “Driving to set that day I realized that with all the rewrites there was no motivation for the Baroness to put the dress in the safe, so that scene had been taken out. I arrived on set and quickly said to the team that we needed to shoot the scene that was removed. I asked them to quickly find some outfits for Horace and Jasper and to get the stunt guys over so we can have them rappelling down. We shot it all in like 45 minutes!”