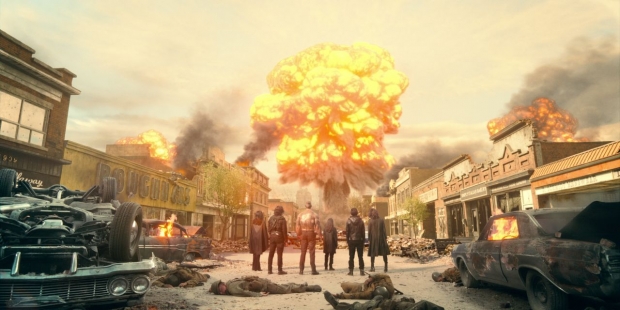 In the new season, which premiered July 31, the dysfunctional, estranged superhero family is back for more misadventures. The sci-fi action series is based on Eisner award-winning comics and graphic novels of the same name created and written by Gerard Way (My Chemical Romance), illustrated by Gabriel Bá and published by Dark Horse Comics.

As we pickup the action, in the process of preventing the apocalypse that wipes out the entire planet, the seven Hargreeves children inadvertently cause World War III. To avert yet another doomsday, Number Five (Aidan Gallagher) goes back in time to prevent the Soviets from launching a nuclear strike against America. Complicating matters is that during his Season 1-ending time jump to save his siblings, he accidentally scattered them in Dallas, Texas, each at a different time between 1960-1963. Unknown to him, saving the world and his family, then safely returning to the present timeline, centers around President Kennedy’s fateful upcoming visit to Dallas. Post-production on the series took place from November 21, 2019 to June 26, 2020, both prior to and during the heart of the initial COVID-19 shutdown. “The pandemic hit us at a crucial time when we were knee-deep into the visual effects,” Burrell says. “Within a week, the vendors were able to get their artists at home safely and they could remote login into their machines. It definitely impacted our schedule by adding three or four weeks.” Some Nuke scripts and compositing elements were shared across multiple vendors, such as the blinks of Number Five and Allison Hargreeves’ (Emmy Raver-Lampman) rumour effect.

Quick editorial turnover was critical, especially on the more complicated sequences.  “As soon as the cut for Battle Dallas was approved, we gave it to Spin VFX because we knew how long it was going to take to get that scene done and wanted to build the temps for when we showed the first cut to the studio. We would turnover big sequences like Pogo stuff early.”

Appearing as a young chimpanzee is Dr. Phinneus Pogo, an advanced primate who was the assistant to and the subject of many experiments by Reginald Hargreeves (Colm Feore), seen throughout Season 1. “We had to reengineer from Old Pogo to Young Pogo,” Burrell explains.  “Old Pogo has been genetically modified by Hargreeves into a hybrid of chimpanzee and human.  [In Season 2] We tell his origin story, where he is captured in the Congo and delivered to NASA for use as a test chimpanzee.  To make a baby look like Pogo was a challenge. We focused on his eyes and muzzle to give him as much similarity to Old Pogo as possible. Once Pogo is injected with the serum that changes his life, the brown chimp eyes change to the hybrid ones that we saw in Season 1.  We took the exact texture from Season 1 and blended it onto the browner chimp eyes.” R&D helped answer several important character design questions. Such as “How big should his eyes be?  How cute do we want to make him?”  “The Mandalorian came out as we were working on that scene and Steve said, ‘We need to make Pogo’s eyes bigger to get more of a cute factor,’” Burrell notes. “That was definitely a cause and effect of Baby Yoda.” One of the show’s most complicated, and stunning, set of VFX sequences involved the Soviet invasion and nuclear holocaust of the opening episode's Battle Dallas. “The whole Battle Dallas thing was off the hook in terms of all new assets that we had to build just for that one scene,” Burrell reveals. “The siblings are running at 125 percent of their power. Vania [Ellen Page] is at full White Violin mode; she is levitating and able to stop a tank shell with her shockwave. You see Klaus [Robert Sheehan] summon the dead, Luther [Tom Hopper] jumps a hundred feet in the air, lands and stops an RPG rocket, then switch to a full CG Ben with his tentacles tossing CG soldiers around.  That whole environment was CG.  It was a 360 degree bluescreen backlot set that we built which was 15 feet tall and 200 feet by 60 feet.   The only things real were the tank, soldiers, cast and the rubble on the ground.  It was all replicated from our street in Hamilton, Ontario.” Extensive storyboards, concept art, previs, techvis and postvis were produced.  “It was the most complicated scene I’ve ever worked on,” the VFX supervisor says. “Steve wanted his Marvel moment.  The children are at their full powers and working together in unity.  The planning was immense.”

Spin VFX was brought on to handle the entire scene. “The set was LiDAR scanned so that the director, Sylvian White, could walk around using a VR edition of the iPad,” Burrell reveals. “There was a Phantom running at 700 frames per second on a camera stick.”  Some of the CG elements were needed because many of the effects could not safely be produced on set. According to Burrell, “Aidan is running around near a tank and machinegun fire. We can’t shoot blank weapons off near a minor [Gallagher].  Everyone of those gunshots or bullets had to be all CG or elements that we shot later.  The tank firing was all CG.  It was an eight-part oner and we had to figure out how to stitch each part together.  It was shot over a period of three days so the lighting changed drastically.  Instead of using motion-control bases and Technocranes, we went on Steadicam and used a real-time playback system to lineup the different shots.  We would double expose where part one ended and part two begins so I could line them all up.  It was a time-consuming and expensive scene.” Unlike the timeless approach to Season 1, for Season 2, early 1960s Dallas, Texas had to be recreated. “It was fascinating,” remarks Burrell.  “I was born in 1965 so I have an affection for that time period.  The first thing we did as a group was to scout Dallas for four days. We went to every landmark and location that was iconic to that time.  Dallas is different now, but we were able to find some great archival stuff. Folks did almost all of the Dallas street shots.”  One key location, Dealey Plaza, was LiDAR scanned. “The heart of Dealey Plaza is still the same as it was in 1963, but not the surrounding buildings and a bunch of them were under construction and covered with scaffolding,” Burrell says. “It was layer upon layer of things.  We’d find security cameras, air conditioners, cars and road signs that weren’t part of the period.  I was lucky enough to be the second unit director in Dallas, so I shot plates of Dealey Plaza, with a drone, from every possible angle.  A lot of it was storyboards and previs.  I was working with Amanda Marsalis, our main unit director, who had specific things that she wanted.  It was a tough shoot because Dealey Plaza is a main thoroughfare so you could only shut it down for a matter of minutes.”

The main street set in Hamilton, Ontario was dressed and redressed over a period of six months.  “That was the main area that represented Dallas,” Burrell describes. “Sissy’s [Marin Ireland] ranch was a beautiful location that they found and built from scratch on a hill.  Elliott’s [Kevin Rankin] store was a phenomenal set.  It was just as beautiful as the Academy was in the first season.  A lot of it was location work, like the cornfield or out in the middle of the road.”  The weather was not always agreeable.  “We had a big problem with our last episode when it snowed.  A decision had to be made as to whether we reshoot with snow or add snow back in. It was a nightmare.  We shot one big scene in the snow and decided to add snow in and around the barn that was generated by Harlan’s [Justin Paul Kelly] power, which had grown out of control.  That was written in to help the viewer understand, ‘Why is there snow all of a sudden?’ We didn’t know when it was going to melt.  In fact, it never did melt.  It went right into winter.” “Ben could go inside the body of Klaus which was something that we had never done before; that was an interesting R&D period of showing Ben blended in with Klaus,” Burrell states. “It was due to a fantastic performance by Robert Sheehan in being tortured and torn up with Ben being inside of him.  We would shoot a pass of Klaus doing his thing and would shoot a pass of Ben which was used as reference for CG Ben that is growing out Klaus.”

“Vanya’s effect went from subtle to big,” Burrell continues. “Her raising the pond up to save the life of Harlan was a big one. She levitates more and that was a combination of wire work and CG doubles. Number Five does do this thing that we called ‘Jell-O Time’ where he goes back in time in slow motion.  You see what he sees between the blinks.”

In another sequence, Ben dissipates because of his interaction with Vanya.  “Hargreeves opens a jar and a marigold flies out into space; that’s how the marigold gets into the kids’ bodies,” Burrell says. “When Ben dissipates, Steve wanted the same marigold effect that is almost like fireflies breaking off and crumbling.”

In another set of sequences, a goldfish has a starring role. “There was a lot of R&D on AJ Carmichael,” the VFX supervisor notes. “Weta Digital bought a couple of real goldfish in New Zealand and kept them as pets.  We had a real actor onset with a collar, suit, grey hood and tracking markers; his head needed to be replaced and from the neck up was completely CG.” A massive simulation was the atomic explosion that forms into an umbrella. “That took months to simulate and to get right,” Burrell explains. “We used test footage that was shot out in the desert in the 1950s. But getting it to form into an umbrella was incredibly difficult.  We had to build an umbrella shape, and let the simulation fill up that volume and form into it; that caused havoc with the simulation. Normally simulations want to be chaotic and do their own thing. So, to constrain it into a shape was a big challenge.”

Along with Battle Dallas in Episode 201, the end of Episode 210 features extensive visual effects.  “Painting snow out and putting snow back in was a massive task.  It was almost 500 shots in that episode alone and that was during the pandemic.  Having a CG fish within a water simulation bowl and the reflections was a challenge.  We had a glass dome that was used a reference for reflections.  There was a plastic fish which was painted to look like AJ.  We had chrome and grey balls as well as HDRIs.  The whole show was a great time but one of the hardest that I’ve ever been involved with.”

‘Natural Habitat Shorts’: Like ‘Ranger Rick,’ But for Adults
Framestore Sets Sail on ‘1899’ with New Virtual Production Tools
Animated Characters: The Art of Babbitt – Part 1
Bruce Smith and Ralph Farquhar Talk ‘The Proud Family: Louder and Prouder’ Season 2
VFX is the ‘Thing’ for Tom Turnbull on Tim Burton’s ‘Wednesday’
We Need to Chat
Choc Chip Animation Riffs on Pop Culture in ‘The Art of Murder’
F is for Flake: The (Not So) Great Animation Robbery?
END_OF_DOCUMENT_TOKEN_TO_BE_REPLACED