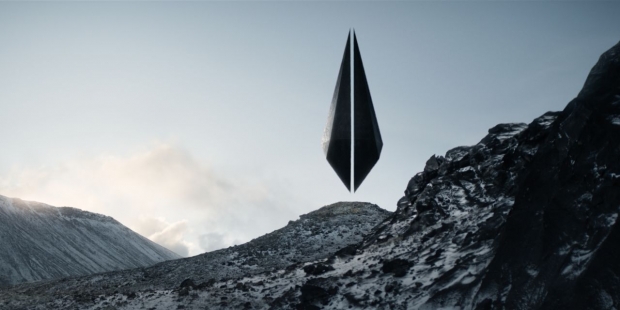 Creative liberties were taken in translating Asimov’s epic book series, such as expanding the visuals, filling in narrative gaps, and making the story more contemporary while keeping the author’s premise and themes intact. The story begins as the Galactic Empire refuses to recognize mathematical proof of its inevitable decline developed by academic Hari Seldon (Jared Harris), who is promptly exiled to the outer rim of the universe. “It’s a chess match of immortality and influence,” notes Goyer. “Because we didn’t have anything in the beginning to point to, developing the visual language was daunting.”

World building was divided between the art department, led by production designer Rory Cheyne, and the visual effects team, led by supervisors Chris MacLean and Michael Enriquez. “Rory designed the whole show and gave us the building blocks for things that we would takeover, like the Vault [mysterious artefact on Terminus] and the Prime Radiant [device that contains Seldon’s revolutionary algorithm],” states MacLean.  “We tried to get as much in camera to save money for the big moments and shots. We weren’t doing hundreds of set extensions, so shooting on location and trying to do things for real as much as possible helped us out immensely.  Even so, there are still 4,000 shots across 10 episodes.” DNEG was lead vendor, followed by Rodeo FX, Important Looking Pirates, Scanline VFX, Chicken Bone FX, Crafty Apes, Mackevision, Rocket Science VFX, Outpost VFX, Tendril and Whiskey Tree. “One of the hardest things in visual effects is to teach somebody that there is a lens between what they rendered and what ends up on the screen,” observes MacLean.  “Learning that process is tough for a lot of people. Trying to teach that to everybody while we were drawing and leaning into our aesthetic was especially difficult.”  Like with most productions of the past two years, the workload increased because of the coronavirus pandemic.  “With the truncated schedule, Mike came on as my post VFX supervisor to interface with vendors while I was shooting Season 1. He became an integral creative partner and we have continued to work together while we finished Season 1 and I prepped for Season 2. Our production crew roles were duplicated as well, with Addie Manis as the VFX producer, stationed with post in LA, and Victoria Keeling as the onset VFX producer during the shoot in Europe.” One of the series’ most notable changes is the introduction of women into the storyline, in particular with the pivotal roles of Gaal Dornick (Lou Llobell) and Salvor Hardin (Leah Harvey).  “In terms of gender-swapping characters,” explains Goyer, “there are no female characters in Asimov’s first book. 52% of the world is female, so it felt dishonest to not be more inclusive. The entire science-fiction field was very male-centric in the 40s and 50s. Female characters were largely relegated to damsels-in-distress on book covers. And while there were a few female science-fiction writers working in the field, there were not many. And quite a few of those wrote under male pseudonyms.”

MacLean agreed with the alterations. “David’s script unpacked the story because Isaac Asimov liked to write about the conversations that people had and skip over the action bits and what actually happened.” Virtual production was utilized sparingly on the production. “People are jumping on this stuff as if it’s the new hot tech,” notes MacLean. “Virtual production is great for lighting, reflections, and being a translight that you can swap out the content on. But in terms of having to track it to one camera, like they did on The Mandalorian, virtual production slows down the shooting process and you’re locked to the shooting method of the volume.”

“But,” he continues, “on the travel down [the tether connecting Trantor Station to Trantor], DNEG gave us some content which we played back. The actors knew what was coming. The Unreal Engine pipeline came in handy for the elevator fall where we could loop the footage or outside the windows of the FTL [Faster Than Light] ship which Gaal Dornick takes from Synnax to Trantor. We had the psychedelic slit-scan footage playing out that window while they were travelling, as well as when we filmed all the space shots. There is a scene in Episode 102 where Raych Seldon and Gaal are in a VR room watching a sunset; that was completely shot footage which we actually rewound in camera, and it all played.”

Initially, the Terminus set was to be built in a quarry about 25 miles outside of Limerick, Ireland.  “We had the rock background that suited the location, but the time of year we were shooting, it started to get wet,” reveals Conor Dennison, supervising art director.  “The quarry was 50 feet below ground level and the whole thing flooded,” he continues, “There was a massive emergency scout with David Goyer and Rory. We had built the whole city in the studio in Limerick with a view of moving it out to the quarry. Just before Christmas we got the news, ‘We’re going to go Fuerteventura.’ We had to pack everything into almost 50 50-foot containers, and that was just before COVID-19 kicked in.  About a month and a half later the whole world locked down. Those set pieces were still on the ship in mid-transit, so they got locked into a harbor over in Rotterdam.  You could write a book about what happened behind the scenes on this one!  We literally closed the shop and studio for three months.  During those three months, they figured out a way of getting the ships out of Rotterdam and back over to Fuerteventura.  We did manage to get the construction crew from Ireland over to Fuerteventura as well and then they had eight weeks to put the whole thing together.” A pivotal story arc involves the mysterious Invictus, a lost spaceship that becomes a weapon of mass destruction.  “We took up half of D Stage to built Invictus, which is the old ship they come across towards the series’ end,” remarks Dennison, who subsequently groans when asked if the corridors were repurposed. “You’ve watched science fiction too much!  We did.  Invictus is meant to be a massive ship.  The design philosophy behind it was that Trantor, which was the main planet where the show’s three antiheroes rule, is meant to be a multilayered planet where over the centuries, layer after layer is built on top of the previous layer. Rory came up with the idea that visually, on certain levels, you would have old, seriously heavy concrete architecture like you would find in Germany.”

“The Invictus is a Brutalist ship constructed out of concrete,” he adds. “There are a series of long fights along all of ship’s the corridors. One corridor is normal, and another is covered in snow and ice.  We dressed one place to look like the other one, switched the doors around, changed the signage and hung dummies from the ceiling to make it look like a continuation of the same ship.”

The enormous Invictus proved a major, and challenging, part of DNEG’s work on the series. “It is one and a half kilometers wide and three kilometers in diameter,” notes Steven Moor, CG supervisor, DNEG.  “The tricky part of the build was the fact that traditionally you would treat something like that as a vehicle. But because of the scale and how close we would get into that particular asset, we had to treat it as an environment.  The catch here is it’s an environment that actually moves around.  There are components that spin wildly. In the old workflow you would build an entire mesh and have it moving in a shot, then you would cache that as a sequence of files.  But because of the scale, the amount of detail, and the memory footprint, there was no way you could cache that. So, we developed a rig and workflow where we would build the ship in sections, instance the section, and flip them around to create the whole design of the ship.  Then we would layer in some additional detail on top of that in Houdini to scatter the points.  We would add a lot of additional detail in Clarisse so you would get the finest surface details.” “We had to come up with a way to drag that live inside our 3D software, so we created a rig that layout could use in Maya,” he continues. “They would drive the position and speed.  Then we would have to figure out how to get that information from Maya to Clarisse so that all the scatter on top of the ship moved with the base. It was a workflow challenge and there was a lot of custom stuff going on in there.  It was a good challenge that turned out well.”

‘Natural Habitat Shorts’: Like ‘Ranger Rick,’ But for Adults
Framestore Sets Sail on ‘1899’ with New Virtual Production Tools
Animated Characters: The Art of Babbitt – Part 1
Bruce Smith and Ralph Farquhar Talk ‘The Proud Family: Louder and Prouder’ Season 2
VFX is the ‘Thing’ for Tom Turnbull on Tim Burton’s ‘Wednesday’
We Need to Chat
Choc Chip Animation Riffs on Pop Culture in ‘The Art of Murder’
F is for Flake: The (Not So) Great Animation Robbery?
END_OF_DOCUMENT_TOKEN_TO_BE_REPLACED