By using distinctive visual effects as a core series element, almost as a ‘character’ itself, Guillermo del Toro and Netflix’s Emmy Award-winning animated series has garnered an Annie Award nomination for Best FX for TV/Media. 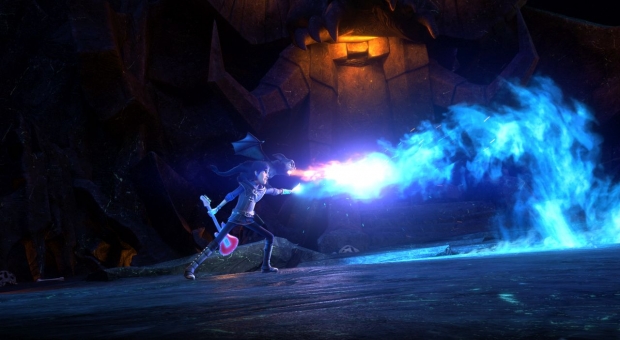 Streaming on Netflix over the last five years, with three series installments, six seasons total, and over eighty episodes and countless characters, Guillermo Del Toro’s Emmy Award-winning DreamWorks Animation Tales of Arcadia series has been both a critical and fan favorite. DreamWorks Wizards, sometimes referred to as Wizards: Tales of Arcadia, or Tales of Arcadia: Wizards, the third and final installment, follows previous installments Trollhunters and 3Below. And, for Wizards’ compositing supervisor Brandon Tyra, the visual effects work was such a core element on the show that it almost “became a character in and of itself.”

“The creative goal from the beginning has always been to have stylized characters and environments, but with a push towards more photorealistic looking textures, lighting and FX,” says Tyra, who worked on the previous Tales of Arcadia stories Trollhunters and 3Below.  The mandate for Wizards was the same, but we wanted to try to push it further in terms of quality, quantity, and complexity.”

Tales of Arcadia tells different stories about inhabitants of the suburban town of Arcadia Oaks, secretly home not only to a handful of supernatural creatures - trolls, aliens, wizards and so on - but also young heroes, ready to fight against dark forces that threaten their loved ones. Each story highlighted special abilities with FX, be it the grainy, energy-based magic in Trollhunters or the “serrator,” light-based technology from 3Below. In Wizards, the magical abilities are smoking -- literally. “Wizards’ smoke-based magic is also different and unique in that it is characterized by runic symbols,” Tyra explains. “The main character Douxie, for example, is able to choose different spells by pressing different combinations of runes on his bracelet. Also, within all the magic FX are little hints of runes rippling throughout. This magic, combined with a lot of destruction, makes the attack on Camelot sequence a very visually exciting part of the overall series.”

In this latest installment of the five-time Annie Award-winning series, Douxie Casperan has unknowingly been the apprentice of the infamous Merlin for nine centuries; he ends up needing to call on the “Guardians of Arcadia” from the previous stories to travel back in time to 12th-century Camelot. The “Killahead, Part Two” episode - which features the clashing of magical Trollhunter swords, magically-powered electric guitar charges, ghost combat and more – just received an Annie Award nomination for Best FX for TV/Media.

According to Tyra, “We had some very ambitious FX sequences. One of the most concerning sequences was the battle sequence in the episode ‘Killahead, Part Two.’ Guillermo was insistent that he wanted a huge battle with tons of characters. Up until that point, we had never really used or developed a complex crowd system like that. So, we had to develop, test, and create that battle sequence, with complex character animations, under a tight deadline.”

But since the beginning of the Arcadia adventures, Tyra says the team’s goal for the show was to be “as big and spectacular as possible to really draw people into this new world and have them excited to click on the next episode button.” While keeping the effects attuned to real-world physics, Tyra and other visual effects artists like fellow nominees Greg Lev, Igor Lodeiro, Cui Wei, and Ma Xiao tried to achieve more cinematic qualities in the lighting with stylized FX. “I usually focus on how well the VFX either enhances or takes away from the characters and overall story,” Tyra notes. “I also pay attention to lighting and integration of VFX and whether or not they believably interact with the character and environment. The FX visually communicates things like danger, power, fear, and despair. Natural FX elements can be used as obstacles that characters must endure or overcome, and, in our case, magic FX elements are used as powerful utilities that enable our heroes to fight and defend against the opposition.”

“There are subtle details within the FX as well as the secondary FX layers that we added to really enhance the complexity of the big FX simulations in this show,” he continues. “We’ve added small design details, such as rippling rune symbols within things like ice and fire magic, as well as sigils and complex design patterns, for the formation many magic spells to really give the FX a sense of character and unique personality.”

Amidst the collision of axes and swords - mainly through the team’s use of Houdini - a brilliant dance develops in the “Killahead” episode between the original Trollhunters magic and the new-age (technically old-age) sorcery of Wizards. The team also used Maya for some particle and fluid simulations and Nuke for compositing, adding in some supplemental 2D FX elements. “Another unique challenge was the character Claire’s shadow magic,” Tyra recalls. “At first it looked too much like just black smoke. It didn’t really communicate the idea of a shadow. It took several look development tests to figure out the look but, eventually, we figured out a good balance using lighting techniques combined with some subtle smoke FX to help sell the correct story intention.”

From preparing shot breakdowns and bidding for simulation and FX work in pre-production to functioning as both a supervisor and an artist during production, Tyra says his role on the series, and personal goal, was to be “as fluid as possible” and help wherever he was needed.

“Having been on the production from the very beginning of the Arcadia trilogy, it was a great foundation to have worked on Trollhunters and 3Below before beginning work on Wizards,” says Tyra. “I was very familiar with the characters and overall story arc as well as the stylized look and FX languages that we had been building in the first two series.”

But, more than anything else, Tyra says the success of the show - which has also received Seven Daytime Emmy awards - lies in the “careful planning, coordination, and in some cases compromise” of the effects team as well as having a strong storyline backbone. “Animation is like an orchestra,” Tyra shares. “It takes each department playing their best and working in concert to make a beautiful piece and the FX are definitely a big part of that. But the one thing that this series had that the others did not is Guillermo Del Toro. He is a master storyteller, and he created a world full of wonder and a story with a lot of heart. For me, it’s been a joy to watch these episodes with my kids and be able to look past the technical aspects of the work and get lost in the story.”

He concludes, “I can say that I truly am a fan of this series. Ultimately whether our viewers are already familiar with or are new to the Tales of Arcadia, I hope they’ve enjoyed watching the series as much as my team and I have enjoyed making it.”

How ‘Luck’ Applies a ‘Less is More’ Approach to Comedy
Z is for Zagreb: The Animafest Zagreb Exhbition 1972-2022
Dude! - ‘Rise of the Teenage Mutant Ninja Turtles: The Movie’ Arrives
‘Super Giant Robot Brothers’: A Milestone in Virtual Animation Production
‘Luck’ Aims to Bring Hope to Kids In and Out of Foster Care
Pre, Tech, and Post: The Many ‘Vizings’ of ‘Chip ‘n Dale: Rescue Rangers’
Hammering Out the VFX in ‘Thor: Love and Thunder’
END_OF_DOCUMENT_TOKEN_TO_BE_REPLACED